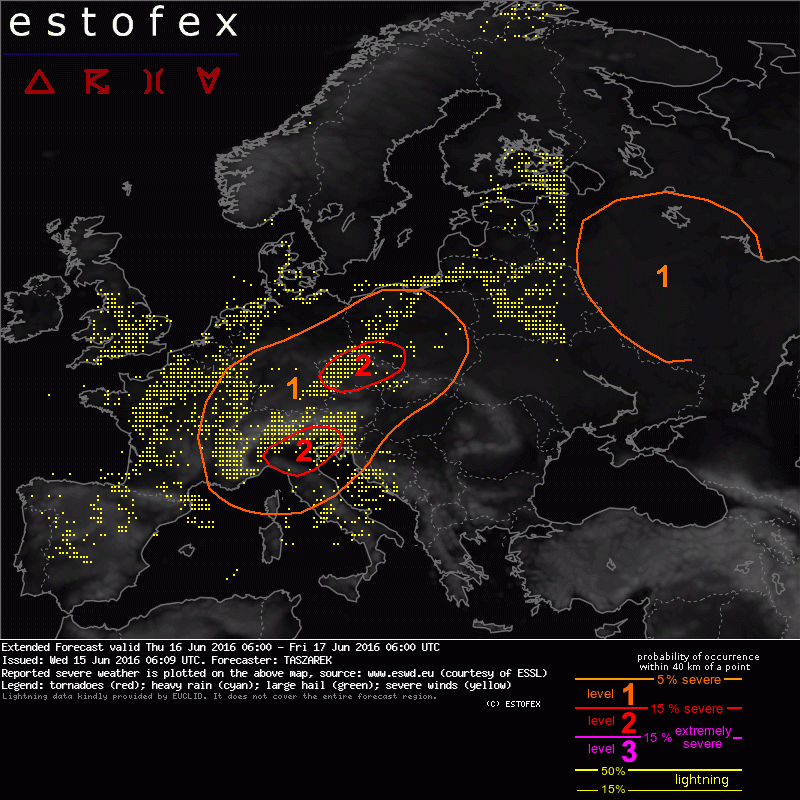 This extended forecast is issued to highlight an elevated potential of severe weather in a high shear / moderate CAPE environment over CNTRL and S Europe on Thursday afternoon and evening hours. There is a risk of very large hail, damaging wind gusts, excessive precipitation and tornadoes.

As a result of tropical air intrusion, an instability given locally enhanced lapse rates exceeding 7 K/km will jump to 1500-2000 J/kg in a thermal boundary corridor stretching from Italy up to S Poland. Eastern flank of the corridor will remain under strong CIN (~ -150 J/kg) where convection will be unlikely. On its western flank CIN will be lower and thanks to diurnal heating will allow DMC in the afternoon hours.

A level 1 denote area with a widespread overlap of high shear and moderate to low CAPE. Level 2 indicate areas where a high shear (DLS ~ 25-30 m/s) overlaps with moderate CAPE (~1500-2000 J/kg) and a favourable lift factor (advection of PVU "patches"). Given such thermodynamic and kinematic conditions a development of thunderstorms evolving quickly into supercells capable of producing large to very large hail is possible.

A widespread CI over N Italy will most likely aggregate cells into multicell clusters and then in the late afternoon hours into MCS. Due to very moist vertical profile (PW > 30 mm) and upslope flow, an excessive precipitation and local flash flooding cannot be ruled out in the Alpine region. Thanks to high MLS (~ 20 m/s), a squall line with bowing segments capable of producing damaging wind gust is also plausible.

NWP models are consistent in predicting a development of a wave along the frontal boundary and a meso-low over W Czech Republic. This will result in a change of vertical wind profile and jump SRH values up to 300-500 m2/s2 over Austria, Czech Republic, Hungary, Slovakia and S Poland. Given LLS over 10 m/s and aforementioned CAPE and DLS values, a supercells capable of producing very large hail and significant tornadoes cannot be ruled out, especially when they will remain isolated. Current understanding indicate the highest threat over Czech Republic and a portion of SW Poland where some of the NWP models predict CI. Thunderstorms over Czech Republic should cluster into MCS in the late evening hours and move to W, CNTRL Poland during nighttime hours posing a threat for severe wind gusts and an excessive precipitation.

Thunderstorms with lower potential of producing severe weather will be also possible over Germany, E France and Switzerland where 30 m/s DLS will overlap with few hundredths of CAPE. Due to strong CIN, thunderstorms are considerably less likely over Slovakia, Hungary and Croatia, but if CI will take place, they may have a potential of producing extremely severe weather.

Limitations of this forecast consider mainly a CNTRL European area with a level 2 over Czech Republic and SW Poland where not all NWP models agree on CI, mainly due to increased values of CIN. Second limitation is related to the magnitude and placement of a developing meso-low, that may both increase or decrease severe weather potential. Third limitation consider the strength and motion of the tropical air mass intrusion that may influence thermodynamic parameters and thus severe weather potential. The last limitation is related to the time of CI. If CI over Czech Republic will take place very late, it will remain elevated and its severe weather potential will significantly drop. Currently a highest confidence in terms of the occurrence of severe thunderstorms fall on N Italy where NWP models are the most consistent in the CAPE magnitude and CI.

A widespread CI in the environment of low shear (~ 10 m/s) and a broad area of moderate CAPE (2000-2500 J/kg) pose a threat for the large hail (2-3cm) and an isolated severe wind gusts. Given very moist vertical profile (PW > 30mm) and slow storm motion, a local excessive precipitation is also possible.