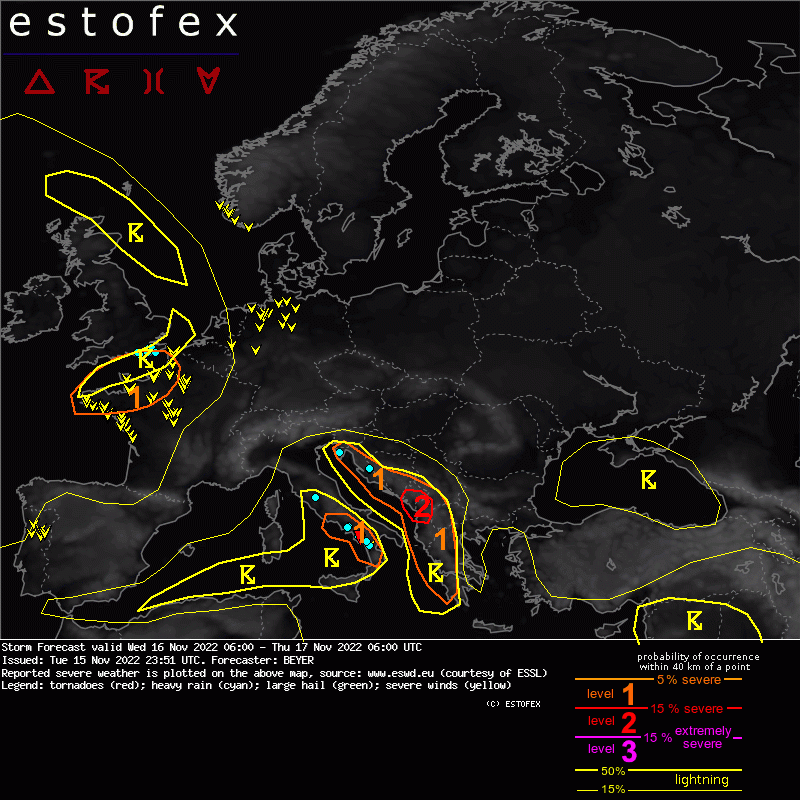 A level 2 was issued for parts of Montenegro and Albania mainly for excessive precipitation and to a lesser extent for large hail.

A level 1 was issued for most of the eastern coast of the Adriatic and Ionian Seas mainly for excessive precipitation.

A level 1 was issued for NE France mainly for severe wind gusts. A tornado cannot be excluded.

SYNOPSIS
A long wave trough influences most parts of NW and W Europe. Several short wave troughs are included traveling from W to E during the forecast period. Frontal systems and secondary lows are connected to these UL short-wave features. A significant secondary low with a strong pressure gradient and low- to mid-level jet maximum will influence N France in the late afternoon and evening hours well into the night to Thursday.

As already mentioned in the synopsis the C Mediterraneans are influenced by a short trough entering from the West and providing UL lift as can be anticipated by the 500 hPa Q vector convergence. Convection will still be active in the morning hours over the W Mediterranean. The active region will then move eastward with the UL trough and influence parts of Italy and later in the afternoon hours also the Adriatic and Ionian Seas.

Given a persistent westerly low-level flow of 20 to 30 kn moist LL airmasses are advected to the respective W coasts of Italy as well as the whole coastline from Croatia to Greece. Specific moisture values are between 10 to 12 g/kg and can partly overlap with steep lapse rates resulting in CAPE values of a few hundred J/kg at the coastlines and up to around 1500 J/kg over the Sea.

Given the high moisture content of the airmass and the persistency of the LL moisture advection, there is an enhanced chance for heavy precipitation in some areas along the coast that may last several hours. As consequence flash floods are possible. Depending on the shape of the coastline and the exact orientation of the LL flow some areas are particularly vulnerable.
Looking at LL moisture convergence fields can give a hint about these areas. For Italy persistent moisture convergence with perpendicular to the coastline oriented LL winds can be found for N Calabria and S Campania where a LVL 1 was issued.

For the Adriatic and Ionian Seas, several areas with enhanced moisture convergence can be found so a broad LVL 1 was issued for the whole coastline from Croatia to Greece.
The strongest signals can be seen for parts of Montenegro and Albania. The orientation of the coastline is an additional factor that may locally enhance the convergence thanks to frictional effects.
Almost all LAMs give the maximum values of convectively enhanced and persistent precipitation in this area. Thus we decided to issue a LVL2 for this particular area.

Finally, it should be mentioned that shear values are locally enhanced with the highest values of up to 20 m/s (0-6km) along the Adriatic coast. Therefore, a few large hail events with isolated storms are possible.

An active secondary low reaches N France in the second half of the day. While the cold front passes in the afternoon and evening hours, the surface trough with a LL wind maximum is active over N France in the night hours.

It is still a bit uncertain where exactly the LL jet maximum will pass and how strong it will be. However, some model solutions (e.g. ICON 18 UTC) show winds up to 70 kn in 1 km height for far N France and still up to 50 kn further inland.

The second question is if these winds can be mixed down. Models show steepening lapse rates especially close to the coastline and also pseudo reflectivity gives indications of developing convective activity.

Given the rather high uncertainties, we issued a LVL 1 that can be understood as a low-end LVL 1 risk. Severe wind gusts can thus not be excluded. Given the low LCLs and high LL shear, we added a low risk of tornadoes.