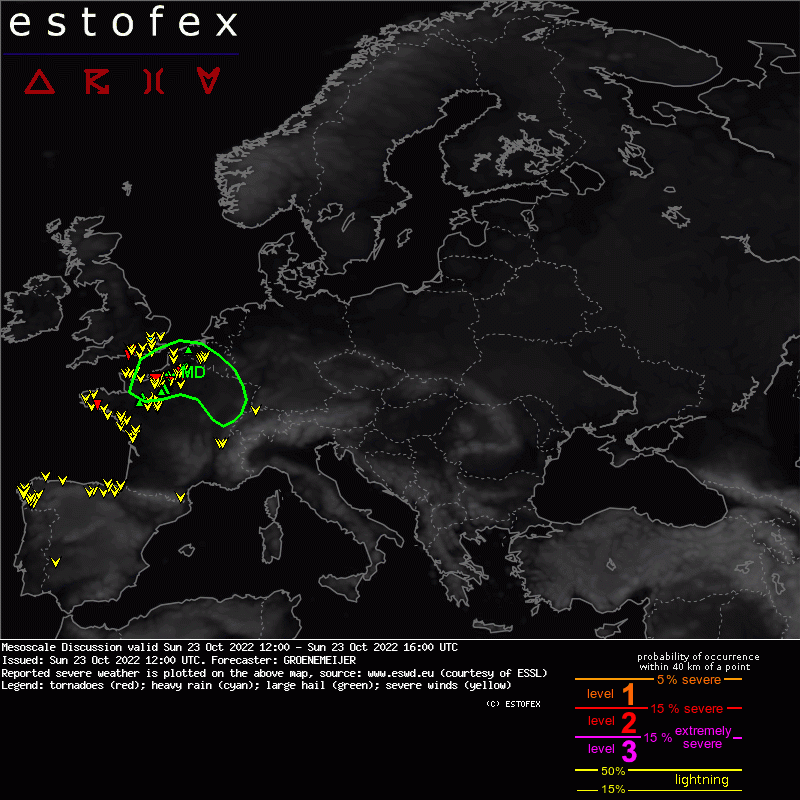 The exit region of a strong (up to 50 m/s at 300 mb) south-westerly jet streak across France translates northeastward. This jet streak creates forcing for upward motion, which at 15 UTC will be focused across a zone from the English south coast across northern and eastern France, as well as ample wind shear. Bulk shear in the 25 - 30 m/s will be prevalent, with 150-300 m2/s2 of 0-1 km storm-relative helicity forecast across the region.

Both large-scale and convection-allowing models forecast convection to initiate across the southern portions of the indicated area during the late afternoon, where 500-1000 J/kg of MLCAPE should be available. Given the strong shear, some of the storms will likely transition into supercells and bowing segments as they race northeastward at speeds of around 25 m/s. They will bear a risk of producing severe wind gusts, isolated tornadoes, and, especially across the southeastern half of the area where MLCAPE is highest (~ 1000 J/kg), large hail.

A limiting factor to tornado risk is the relative stability of the boundary layer, predicted by most models. The highest tornado risk is expected across Belgium, and across the French regions of Normandy, Hauts-de-France, and the western half of Grand-Est, where low-level shear and lapse rates are best. When a tornado develops, the shear supports it becoming strong (>= F2).

After 16 UTC, the storm risk should translate into the central and northern Benelux, the Saarland, Rhineland Palatinate, Alsace, and western Baden-Wuerttemberg. Diurnal low-level stabilization will then limit the tornado risk more than before.