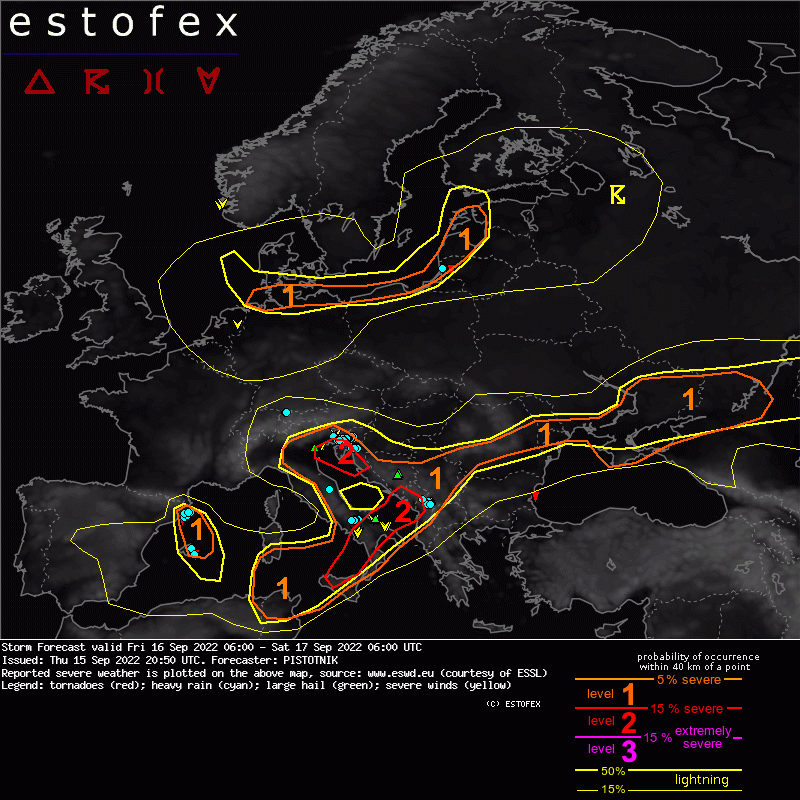 A level 1 is issued for parts of Bosnia-Herzegovina, Serbia, Romania, Moldova, the S Ukraine and SW Russia for excessive convective precipitation, large hail and severe convective wind gusts. Along the coasts of the N Black Sea and the Sea of Azov, tornadoes are also possible.

A level 1 is issued for Catalonia, the Balearic Islands and N Tunisia for excessive convective precipitation and large hail.

A pronounced area of low 500 hPa geopotential has settled over Scandinavia and the North Sea and further expands towards the Alpine region. It is rounded by a strong mid-level jet from Iceland to the British Isles, central Europe and Belarus. A second mid-level jet streak stretches across the Mediterranean Basin and further to the Black Sea.
At the surface, the center of the strong cyclone is placed over Finland. Maritime polar air spreads continuously further southward in its wake, which results in a pronounced and lasting transition from late summer into autumn over much of Europe. By Sat 06 UTC, hot subtropic air can only keep its place from Sicily to Turkey and the Caucasus region.

Friday is another day with an impressive setup for organized storms, as the pronounced - albeit not particularly sharp - frontal zone continues to shift southward. Ahead of it, the SW-erly flow advects an elevated mixed layer (EML) from the Sahara across the region.
On Thursday, daytime heating and strong mixing from the low level jet made the boundary layer connect to this EML in inland parts of the southern Balkans, but even some coastal areas of Albania and south-central Italy, resulting in "inverted-V" profiles with 2m temperatures well above 30C and 2m dewpoints around or even below 10C with very little CAPE and a hostile environment for convective initiation (see the Thu 12 UTC Nis, Sofia and Bucuresti soundings). Further north, converging winds along the diffuse frontal zone and a mess of outflow boundaries deepened the moisture and made it resilient enough to create robust CAPE beneath the EML or its northern fringes: up to 1000 J/kg in inland areas (sampled by the Thu 12 UTC Milano and Zagreb soundings) and between 1000 and 3000 J/kg in coastal and offshore areas (sampled by the Thu 12 UTC Decimomannu, Trapani, Pratica di Mare, Bologna and Udine soundings). Convective initiation was only isolated to scattered between the Balearic Islands and central Italy, where still a strong cap was in place while synoptic lift was limited, whereas numerous repeated storms erupted from NE Italy to Slovenia, Croatia and Hungary when the remaining cap was eroded by increasing synoptic lift.
These characteristic environments and a similar CAPE magnitude will again be in place on Friday, but shift about 200-300 km further southeast. The robust CAPE reservoir is again overspread by moderate to strong vertical wind shear between 15 and 25 m/s across the 0-6 km layer and 10 to 20 m/s across the 0-3 km layer. In the belt from Sardegna to south-central Italy, Montenegro, Albania, Serbia and Romania, storm coverage will remain rather limited during daytime, before it is expected to increase in the evening and overnight in response to strengthening synoptic lift, especially in the onshore and upslope flow regimes of the west-facing coasts of Italy, Montenegro and N Albania. All kinds of severe weather are expected: Mainly severe straight-line winds in case of a linear convective mode, large hail and tornadoes in case of supercells, and excessive rainfall especially when convection side- or backbuilds towards the warmer air, or in general when it is packed against the mountains. A level 2 is issued for the region with the expected highest storm coverage, while the rest is covered by a large level 1.
Further north, the Alpine crest and the rapid deepening of a secondary cyclone over the Gulf of Genova delay the airmass exchange over N Italy and the N Adriatic region and still keep warm and moist air with CAPE up to 1000 J/kg or even more in place. It is not before the evening that strong Mistral, Foehn and Bora winds will finally start to make a quick progress. Under strong synoptic lift, scattered to widespread storms are expected almost around the clock. As vertical wind shear only slowly relaxes, still a multi- to supercellular organization or upscale growth into large clusters are likely. Especially tail-end storms with access to rich maritime moisture can produce all kinds of severe weather. Further inland in Slovenia, Croatia and Bosnia-Herzegovina, convection will be undercut by cooler air and turn elevated, which limits its severe weather hazards, last that of heavy to excessive rain that can stretch some distance inland with repeated rounds of storms.

Synoptic lift only grazes the western part of the Mediterranean Basin and vertical wind shear is also weaker (mostly 10-15 m/s across the 0-6 km layer), but robust CAPE between 1000 and 3000 J/kg is in place along the tail of the cold front between Catalonia, the Balearic Islands and Tunisia. Forecast models disagree on the storm coverage, but isolated to scattered initiation appears quite likely, especially in the afternoon and evening over Catalonia (from where a large storm cluster can move to the Baleares overnight) and Tunisia. The dominant convective mode is multicellular, and the main hazards are large hail and excessive rain.

Two pronounced short-wave troughs travel quickly eastward in the southern mid-level jet streak and exert synoptic lift upon moist and warm air near the frontal zone with CAPE up to 1000 J/kg, deep-layer shear between 15 and 20 m/s and regionally strong low-level veering especially in coastal areas. Scattered convective initiation is likely in the afternoon over the SE Ukraine and SW Russia and in the evening over Moldova and around (possibly also emerging from storms detaching from the Carpathian mountains in Romania). Multicells and a few at least temporary supercells are expected and can produce some severe hail and wind events, especially tail-end storms towards the south which can benefit from steeper lapse rates in the warmer air and an undisturbed low-level wind field. Otherwise, excessive rain is the main hazard. In coastal areas, a few tornadoes are possible.
Storms will gradually become elevated and weaken overnight in inland areas, whereas they may still be surface-based and severe over the warm sea waters.

... windward coasts of the Baltic and North Sea from Estonia to NW Germany ...

Lively shower activity is expected in the well-mixed maritime polar air that features a few hundred J/kg CAPE and weak vertical wind shear, but a strong background wind field. The deepest showers may produce weak to moderate lightning activity. Strong to isolated marginally severe wind gusts are possible, as well as localized flooding where repeated rounds of convection move onshore. In addition, a brief tornado is not ruled out in the coastal belt where the sudden onset of surface friction creates a zone of convergence and enhanced 0-1 km shear.