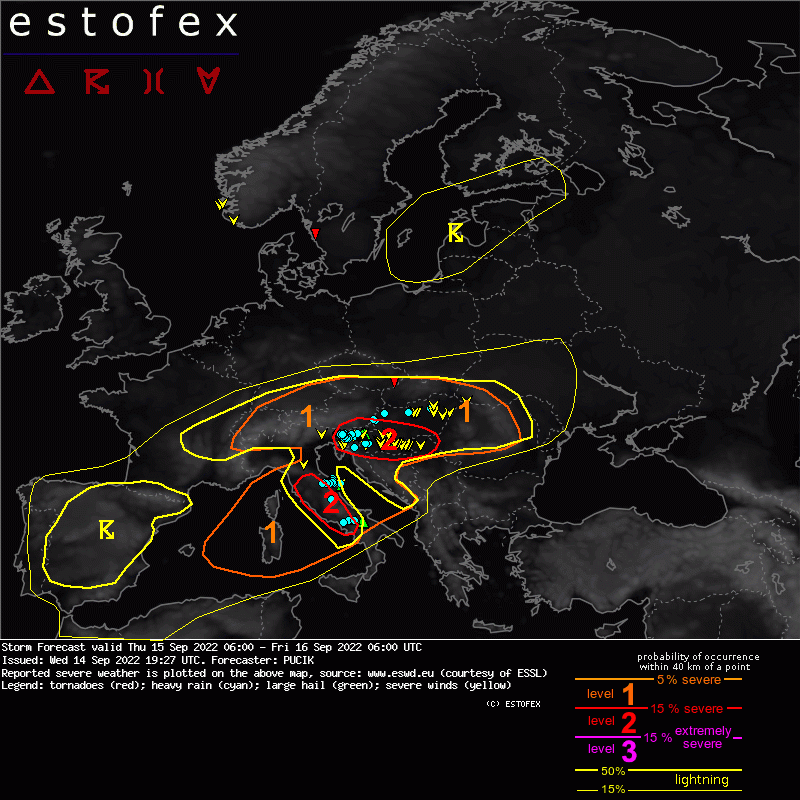 A level 1 was issued in a belt from Switzerland through S Germany, N Austria, S Czechia, Slovakia, N Hungary into Romania mainly for severe wind gusts and to the lesser extent for large hail and tornadoes.

A deep cyclonic vortex over Scandinavia will be the leading synoptic-scale player during the forecast period. South of the vortex and west of another low over Iberia, strong mid-tropospheric flow is simulated, reaching up to 30 m/s at 500 hPa level. Closer to the surface, a cold front will cross S Germany, France, Czechia, and Poland and will lock onto the Alpine ridge. South of the front, considerable low-level moisture allows for at least a few hundred J/kg of MLCAPE. Higher CAPE values are forecast across the central Mediterranean, where steep mid-tropospheric lapse rates have advected from Sahara.

South and along the cold front, scattered to widespread storms are forecast. Given 0-3 km bulk shear > 15 m/s, expect well-organized storms that will move fast E/SE. Despite marginal CAPE from Switzerland and S Germany through N Austria, S Czechia, N Hungary, Slovakia, and Romania, strong shear will allow at least a couple of stronger updrafts capable of severe weather. Given the forecast profiles and mostly unidirectional hodographs, severe wind gusts and marginally large hail will be the main threats here. However, some forecast hodographs show curvature combined with 0-1 km bulk shear > 10 m/s, suggesting a conditional tornado threat given that supercells form.

A belt of enhanced severe weather is forecast from Slovenia through N Croatia, S Hungary to N Serbia. High-resolution convection-allowingÂ models simulate isolated supercells moving over the area during the late morning and afternoon hours over multiple subsequent runs. Forecast profiles and hodographs support these simulations and with strong low-level shear, all hazards will be possible. Severe wind gusts will be the most prominent one given the mean flow in the lower troposphere around 20 m/s. Towards the evening, a quasistationary MCS over Slovenia/N Croatia is simulated with the threat of heavy rainfall. Should the MCS detach from the coastline and travel fast E towards Hungary and Serbia, expect high coverage of severe wind gusts.

Another area of enhanced severe weather is the W coastline of Italy, where high CAPE and strong shear combine to create a volatile environment with a high conditional probability of (extremely) severe weather. Given the lack of strong synoptic-scale lift, it is currently questionable how many storms will form over the area and how far south the development willÂ propagate. Nevertheless, all models simulate considerable convective precipitation and Lvl 2 is warranted. All severe hazards are possible and their prevalence will depend on the exact convective mode (isolated supercells vs an MCS).

Further W, chances of convective initiation seem much lower. Nevertheless, isolated well organized and severe storms will be possible also over Sardegna and the surrounding sea.