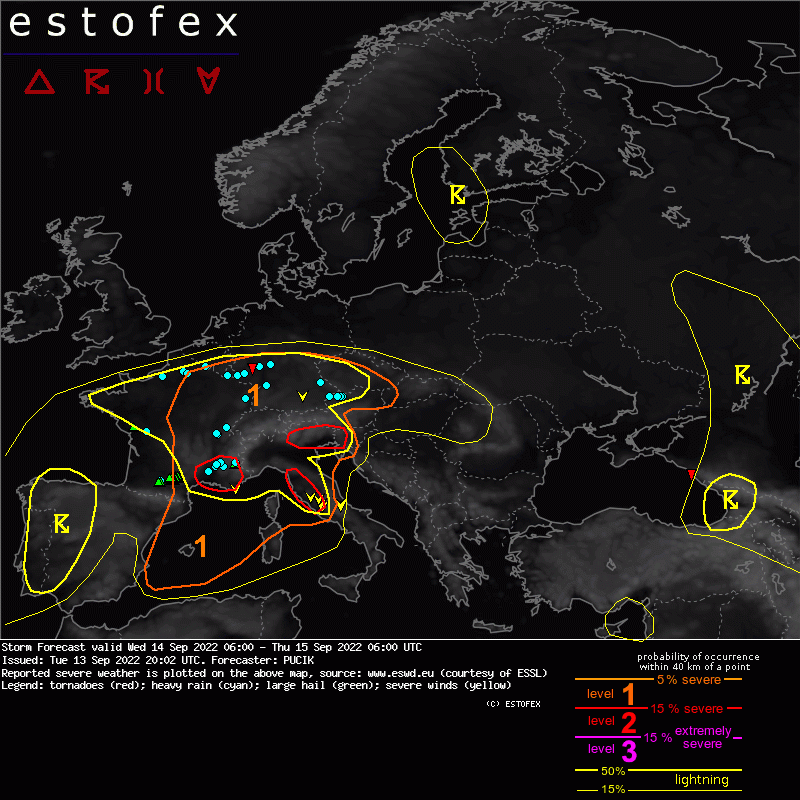 A level 2 has been issued for SE France and W Italy mainly for large to very large hail, excessive rainfall, tornadoes and severe wind gusts.

A level 2 has been issued for NE Italy mainly for severe wind gusts, large hail and tornadoes.

A level 1 has been issued from central France through S half of Germany to SW Czechia and N Austria mainly for severe wind gusts, large hail and to the lesser degree for tornadoes.

A level 1 has been issued across the Balearic Sea and Corsica mainly for large to very large hail, heavy rainfall and severe wind gusts.

An active weather pattern is forecast across Europe. In the mid to upper troposphere, the N part of the continent will be under a deep cyclonic vortex with a trough stretching into S Russia and Caucasus. S of the vortex, a ridge will stretch from Tunisia towards SW Balkans. Another low will be centered over NW Iberia. In between these features, strong flow is anticipated, yielding high shear conditions in most areas that will encounter convective storms.

Closer to the surface, a pronounced frontal boundary will run from the British Isles through central Germany, Czechia into S Poland. A frontal wave is forecast to develop along the boundary and its cold front will push across N France, Germany, and W Czechia by Thursday morning.

Mixing ratios between 10 and 12 g/kg will allow for several hundred to about 1000 J/kg of MLCAPE despite weak lapse rates. CAPE will remain rather skinny though. Frontal boundary and local orography are forecast to initiate storms and several waves of storms are possible during the day and overnight to Thursday morning. Strong vertical wind shear is forecast with values around 10 m/s in the 0-1 km layer and 15 m/s in the 0-3 km layer. A mix of short linear segments and supercells is forecast. Convection-allowing models simulate numerous storms, but with weak updraft helicity signals, perhaps due to the lack of abundant buoyancy. A lvl 2 was considered for a narrow zone near the frontal boundary but was discarded at the moment due to some discrepancy among the models concerning the degree of buoyancy and low-level shear. Severe wind gusts will likely be the primary threat, followed by large hail in the case of supercells. Linear hodographs reduce the risk of tornadoes, but they are not ruled out.

Strong onshore S-ly flow is forecast to develop across the region. MLCAPE > 2000 J/kg along the coastline will combine with strong vertical wind shear, yielding a high probability of severe thunderstorms given storm initiation. Storms will be possible from the early morning hours to the evening. Some forecast profiles show impressive curved hodographs with strong-low level shear and more than 400 m2/s2 of SRH in the 0-3 km layer. All severe weather hazards will be possible, depending on the convective mode. Supercells may result in very large hail or tornadoes, while convective systems will be more prone to heavy rainfall.

Scattered to widespread storms are forecast in the late evening to overnight hours, culminating in the Thursday morning hours. Similar to SE France, forecast profiles are equally, if not even more impressive here, featuring high CAPE, 0-3 km bulk shear > 20 m/s, and 0-1 km bulk shear up to 15 m/s along with significant hodograph curvature inland. Expect all kinds of severe weather hazards with the forming storms, including the potential for extremely severe (very large hail or strong tornadoes). Lack of pronounced low-level forcing may perhaps limit the coverage of storms and allow for some isolated supercells.

Lvl 2 is used to highlight a zone of very strong shear (0-3 km bulk shear > 20 m/s) and curved hodographs with a potential for very well-organized storms capable of all kinds of hazards, including tornadoes. While the environment seems to be very conducive to severe weather, initiation remains questionable. While low-resolution models simulate storms in the area, high-res models are skeptical of storms over the lowlands. This area needs to be monitored closely in the afternoon to evening hours.

... Balearic Sea through Sardegna and Corsica ...

While initiation over this region is questionable given the lack of forcing, high CAPE and strong shear will allow any sustained storm to become severe. Local forecasters need to monitor the region for hints of convective initiation. The most likely areas for initiation will be the Balearic islands and the higher terrain of Corsica.