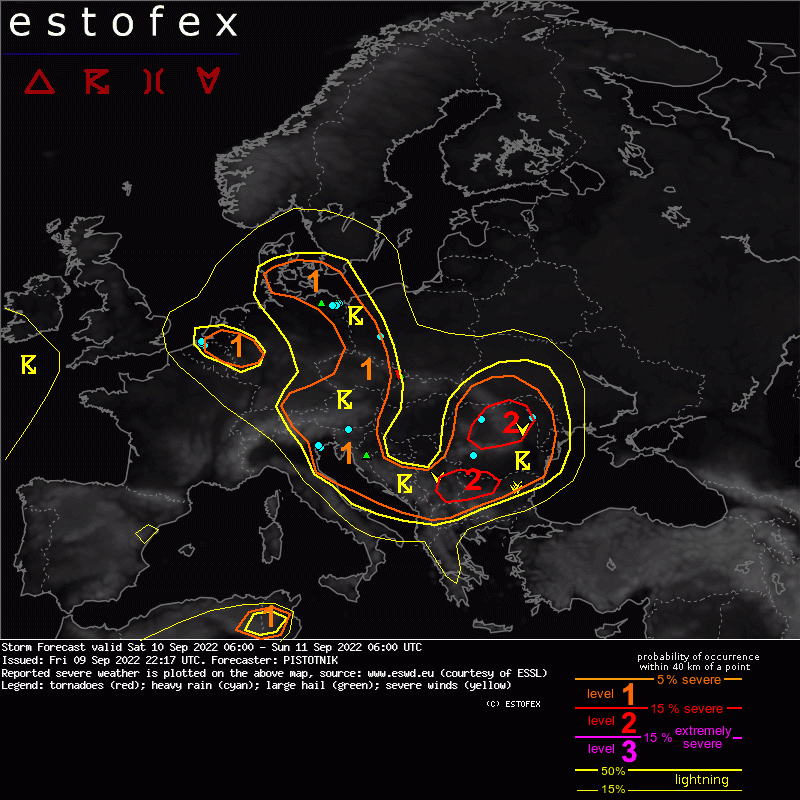 A level 1 and level 2 are issued for Romania and the SW Ukraine mainly for large hail, excessive convective precipitation, severe convective wind gusts and to a lesser degree for tornadoes.

A level 1 and level 2 are issued from the S Alpine region to Bulgaria mainly for large hail, excessive convective precipitation and to a lesser degree for severe convective wind gusts.

A level 1 is issued for parts of Belgium, the Netherlands, Germany, W Poland, the Czech Republic and N Austria mainly for excessive convective precipitation.

A level 1 is issued for Denmark mainly for excessive convective precipitation and to a lesser degree for tornadoes.

A level 1 is issued for NE Algeria and N Tunisia mainly for severe convective wind gusts.

A cut-off low slowly moves eastward across Germany and Poland. A pronounced mid-level trough rounds its southern flank, and several embedded short-wave troughs create areas of strong synoptic lift from Belgium and E France across the Alpine region all the way to Romania and the Ukraine. While the old surface low fills along its track from the Netherlands SE-ward across Germany, a new one forms in the left exit region of the mid-level jet over Hungary and rapidly deepens while it moves to Belarus. In its wake, cooler air gradually spreads into the Balkans and the central Mediterranean region, though a distinct cold front is missing.
Downstream and upstream of this dominant cut-off low, mid-level ridges are in place in W and far-E Europe, respectively.

Once more, an unseasonably potent setup for organized storms develops beneath the mid-level jet that curves around the S flank of the central European cut-off low. Areas of synoptic lift as well as diurnal heating over elevated terrain create at least moderately steep lapse rates that are advected on top of rich low-level moisture, creating CAPE often between 500 and 1500 J/kg that overlaps with 0-6 km shear between 15 and 25 m/s. Numerous sources of lift are available across all scales, from travelling vorticity maxima to the diffuse cold front, sea breezes, upslope circulations and outflow boundaries. Some storms may already be active in the morning, and around noon they should become quite widespread.

The most interesting wind profiles develop in the warm sector of the quickly developing cyclone over Romania, where vertical wind shear becomes also pretty strong across lower levels (up to 15 m/S across the 0-3 km, up to 10 m/s across the 0-1 km layer) and the flow is strongly curved. The key question how much the unstable air indeed overlaps with these strong kinematics depends crucially on the clearing of the warm front's cloud shield, which is difficult to assess. However, forecast models largely agree on a fairly robust overlap and convection-resolving models also show scattered discrete and well-organized storms that shall erupt over the Carpathians and move E- to NE-ward. Multi- and supercells are quite likely and can produce all kinds of severe weather, most notably large hail and localized excessive rainfall. If 0-1 km shear indeed turns out to be indeed that strong inside the area of notable CAPE, severe wind gusts become another option and even one or two tornadoes are not ruled out.
Convection will cluster, become elevated and be packed into the stratiform rain shield of the warm front as it enters the Ukraine towards evening, which quickly limits its severe weather hazards.

Further upstream, at least scattered thunderstorms are also expected from the southern Alpine region (NE Italy, S Austria, Slovenia) across the W Balkans to Bulgaria under similar CAPE values and long, straight hodographs, though vertical wind shear is only that strong across the 0-6 km layer but much weaker below it. Storms can organize into multicells, perhaps some (splitting) supercells and grow upscale into a few clusters. The main hazards are large hail and (later on) excessive rain, while isolated severe wind gusts are not ruled out, either. Convection will peak in the afternoon to evening over land but will have an inverse cycle (or none at all) over the Adriatic Sea, where a few tornadoes are not ruled out if pronounced convergence zones form, most notably nocturnal land breeze fronts.
The model consitency is best over W Bulgaria, which is upgraded to another level 2. Otherwise, the highly dynamic setup and little model consistency on details (e.g., the placement and strength of the small short-wave troughs aloft or the advancement of the weak cold front) make it difficult to asses any hot spots, hence a broad level 1 corridor seems to be the best solution.

Rather poor lapse rates, but rich low-level moisture allow CAPE up to 1000 J/kg under weak vertical wind shear in vicinity of the center of the cut-off low. Another day with scattered to widespread, diurnally driven, rather low-topped thundery showers is in store. Some excessive rain events are expected again.
In Denmark, particularly low cloud bases in conjunction with a weak, cyclonc wind field points to a possibility of a few brief, non-supercellular tornadoes are not ruled out.

Abundant low-level moisture allows very high CAPE - Friday's 12 UTC soundings from Barcelona (Spain) to Lecce (Italy) sampled values between 1500 and 4000 J/kg -, but it remains strongly capped in coastal and offshore areas as a Saharan elevated mixed layer is advected over the Mediterranean moisture. Some orographic afternoon to evening storms are expected in the inland parts of Algeria and Tunisia, where lapse rates are very steep but moisture is much lower. The dry and deeply mixed profiles imply a hazard of strong to severe, evaporation-driven downbursts even despite only low to moderate vertical wind shear. Isolated afternoon storms are not ruled out over E Spain and central Italy, either, but should likewise be tied to the mountains and not propagate to the high CAPE reservoir at the coast.