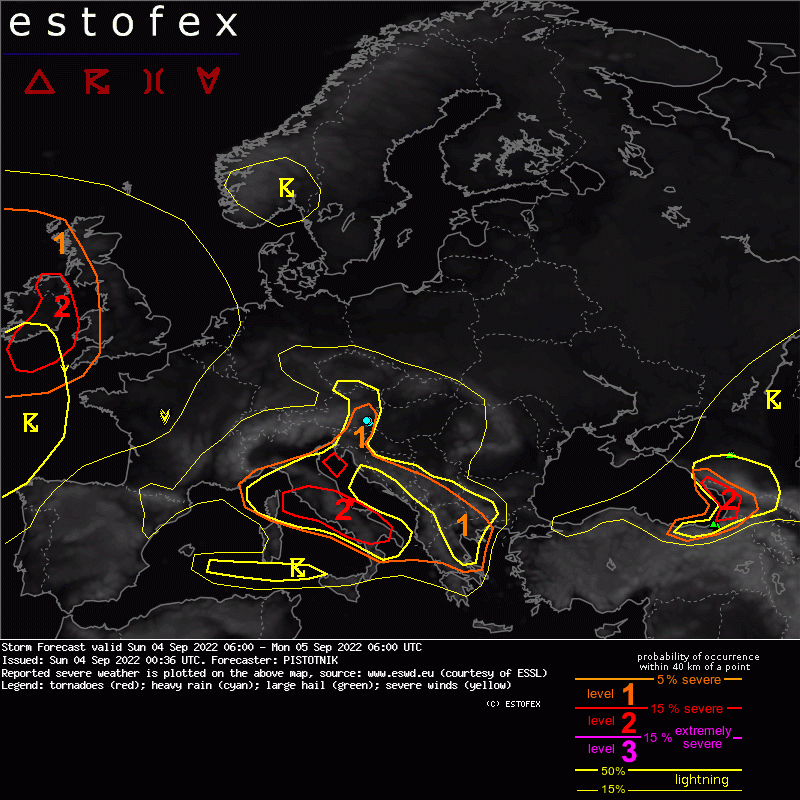 A level 1 is issued from Austria to Albania and North Macedonia mainly for excessive convective precipitation.

A level 1 and level 2 are issued for the Adriatic Sea for non-supercellular tornadoes (waterspouts).

A level 1 and level 2 are issued from the Ligurian Sea to Greece mainly for large hail, severe convective wind gusts, excessive convective precipitation and to a lesser degree for tornadoes.

A level 1 and level 2 are issued for Ireland, Ulster and the W coasts of England, Wales and Scotland for severe convective wind gusts and tornadoes.

A level 1 and level 2 are issued for parts of Georgia, NE Turkey and Armenia mainly for excessive convective precipitation (especially close to the coasts) and to a lesser degree for large hail and severe convective wind gusts (especially further inland).

Two large, pronounced and stationary mid-level lows over European Russia and just W of the British Isles are the dominant features on the 500 hPa weather maps. In-between, a highly amplified mid-level ridge stretches from Algeria towards Norway.
At the surface, a first autumnal outbreak of polar air has invaded the NE-ern half of Europe in the wake of the Russian cyclone, whereas the Atlantic cyclone keeps subtropic air in place in the SW-ern half. The frontal zone between these contrasting air masses acts as a cold front over SW Russia, Georgia and Turkey, where it terminates a record-breaking late heat wave. Between Turkey and the North Sea, it starts getting warm-active again with increasing warm air advection ahead of the Atlantic cyclone.

... central Europe and central Mediterranean region to the W Balkan states and Greece ...

Several vorticity maxima round the main mid-level ridge, move SE-ward and provide synoptic lift. As they track along the inactive frontal zone, they encounter a wide range of CAPE: only minimum values from Germany to Romania, some hundred J/kg from Austria to Greece, around 1000 J/kg in the Ligurian and Adriatic region and 2000 J/kg or more from Corsica to the Ionian Sea. The rising CAPE magnitude to the SW is owed to the advection of an elevated mixed layer (EML) from Iberia on top of abundant maritime low-level moisture, which, however, also creates a robust capping inversion. The highest CAPE reservoir is well collocated with deep-layer shear up to 25 m/s beneath the subtropic branch of the jet stream, whereas deep-layer shear is much lower - around or below 10 m/s - towards the NE.
Current thinking is that the lift of the vorticity maxima will allow scattered convection, which follows the diurnal cycle and is mostly tied to hills and mountains in inland areas. (Along the Carpathian arc, it may not even grow deep enough to produce lightning.) The main hazard is localized excessive rain. On the Adriatic Sea, especially its northern part, the highest coverage of showers and thunderstorms is expected in the 06-12 UTC time frame and may produce some waterspouts, before land breezes will dissipate the cyclonic and convergent wind field again.
It is somewhat unclear how far SW-ward the synoptic lift will reach and how much it will interact with the very unstable and strongly sheared airmass. However, forecast models largely agree on a cluster of convection also around Corsica already in the morning, which shall move to the N Tyrrhenian Sea and then to south-central Italy by afternoon. This activity can organize into multicells or large clusters, tail-end storms towards the south also into supercells. The higher CAPE and the better storm organization also imply hail, wind and tornado hazards next to excessive rain. This corridor is upgraded to a level 2. In the evening and overnight, convection may also reach Greece, where the severe weather threat gradually decreases under relaxing CAPE and shear.

Further west, convective initiation becomes much less likely despite a pretty similar environment - i.e., CAPE rising from a few hundred to more than 2000 J/kg and deep-layer shear from 10 to 25 m/s from inland to offshore areas - due to a fairly strong cap and lacking synoptic lift support (warm air advection is largely cancelled by negative vorticity advection). Isolated afternoon storms are not ruled out over the mountains from E Spain to S France and in general over W France, but will not reach the awe-inspring environment along the Mediterranean coast. In addition, elevated convection is expected between the Balearic Islands and Sicily in the morning, perhaps also across parts of France overnight. In any case, severe weather appears unlikely.

... Ireland and Ulster, W coasts of England, Wales and Scotland ...

Close to the active Atlantic cyclone, two pronounced synoptic features cross Ireland and Ulster from SW to NE in this forecast period, which can be interpreted either as commas or as quickly occluding frontal systems. Intense lift from accompanying mid-level troughs will likely create two forced convective rainbands in an environment that is favorable for severe wind gusts as well as tornadoes.
The first system crosses Ireland and Ulster already Saturday night and leaves it shortly after the beginning of this forecast period at Sun 06 UTC. While the kinematic conditions are most impressive (e.g., shear up to 20 m/s and storm-relative helicity up to 300 m^2/s^2 across the 0-3 km layer), a lack of CAPE could be an issue, and it is not clear if the first rainband will grow deep enough to produce lightning.
The second system follows in the 18 to 03 UTC time frame and features slightly weaker kinematics, but more robust CAPE, probably on the order of 500 J/kg.
All in all, the combined threat by both systems appears high enough for a level 2. The assessment of the main hazard (straight-line winds or tornadoes) depends on the mesoscale structure of the rainbands and needs to be left to the nowcasting time frame. In case mesoscale vortices develop, the expected very low cloud bases (just a few hundred meters above sea level) could even support an outbreak of several tornadoes.

A strong cold front moves SE-ward and pushes cooler air beneath an EML from the Turkish plateau. In inland areas of SW Russia, the cool and dry air will likely suppress surface-based storms, and only elevated and non-severe convection is expected. In contrast, the Black Sea warms and moistens the advancing air, creating robust CAPE on the order of 1000 J/kg (perhaps even more) under around 15 m/s deep-layer shear.
Synoptic and mesoscale lift are likely strong enough to allow scattered to widespread convective initiation. In coastal areas, and in particular in the persistent upslope flow on the SW side of the Caucasus mountains, excessive rain is the main hazard. Further inland in interior parts of Georgia and NE Turkey as well as Armenia, hotter and drier air could rather promote a few severe hail and wind events, though the overall storm coverage will likely be lower.