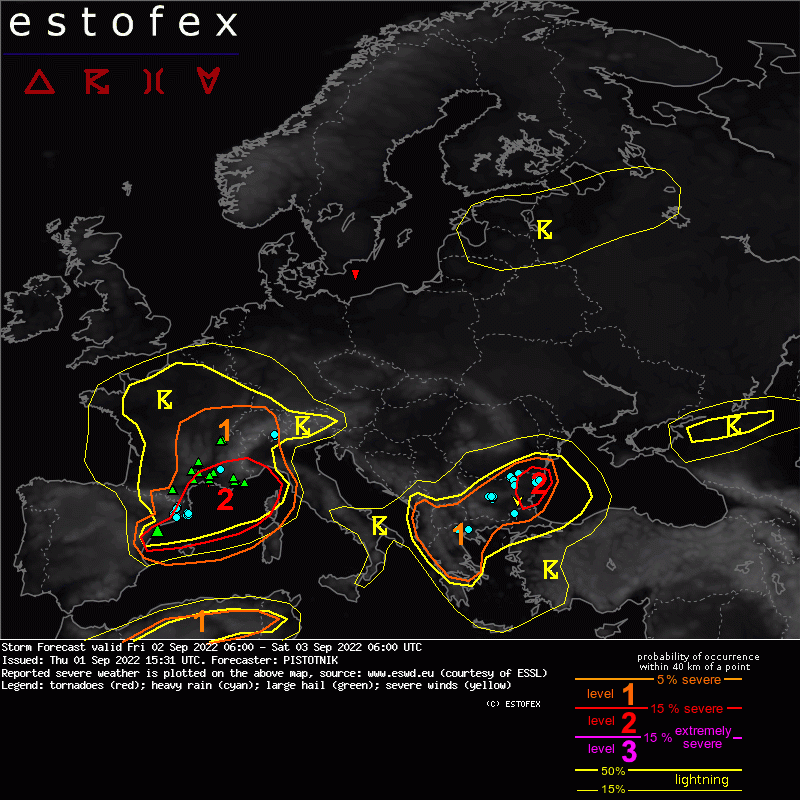 A level 1 and level 2 are issued for NE Spain, S France, the NW Mediterranean Sea and Corsica for excessive convective rainfall (especially in S France), large hail and severe convective wind gusts and to a lesser extent for tornadoes (in coastal and offshore areas).

A level 1 is issued for parts of France and Switzerland mainly for excessive convective rainfall and to a lesser extent for large hail and severe convective wind gusts.

A level 1 and level 2 are issued for Greece, Albania, North Macedonia, Bulgaria and SE Romania mainly for excessive convective rainfall.

A level 1 is issued for parts of Algeria for severe convective wind gusts and to a lesser extent for large hail.

A complex weather situation is in place. Two large and pronounced, steering cyclones are placed over NW Russia and just W of the British Isles, separated by a blocking anticyclone that is squeezed further northward to the Norwegian Sea. Slightly lowered 500 hPa geopotential loosely connects the two cyclones across north-central Europe and also elongates into a shallow trough between Slovakia and the Aegean Sea. This configuration creates a broad band of moderate westerly mid-level flow across the entire Mediterranean basin (interpretable as the subtropic branch of the jet stream).
The main feature at the surface is a diffuse and stationary frontal zone from the British Isles to the Balkans and the Black Sea. A first autumnal outbreak of polar air affects NE Europe, whose fringes also spread westward into central Europe on the north side of the frontal zone in form of moderately cool and dry continental air. In contrast, warm and often moist subtropic air still resides further south and west.

The increasing southwesterly flow ahead of the British cyclone advects steep lapse rates from the Spanish Plateau and the Pyrenees northeastward, where it overspreads abundant low-level moisture with 2m dewpoints well above 20C in coastal and offshore areas and still decent moisture with 2m dewpoints in the upper tens in inland France and Switzerland. Resulting CAPE magnitude is mostly below 1000 J/kg in inland regions, 1000-2000 J/kg in the coastal belt, and 2000-4000 J/kg offshore over the W Mediterranean Sea (see the Thu 12 UTC Barcelona, Palma and Ajaccio soundings, the latter adjusted for the erroneous surface dewpoint). Deep-layer shear also increases from 10 m/s to 25 m/s from north to south beneath the subtropic jet. To sum it up, an impressive CAPE-and-shear overlap is in place towards the south, where, however, also the strength of the capping inversion beneath the elevated mixed layer turns impermeably strong. As usual in these situations, convective initiation therefore becomes more questionable further south, whereas the conditional severe weather hazards (given that storms can successfully initiate) increase.

(1) Interior France and Switzerland:
Aided by subtle synoptic lift and low-level convergence at the cold front that brings cooler Atlantic air, two rounds of scattered to widespread thunderstorms are expected across France, probably starting already before noon, as well as some hours later over the Swiss Alps and Jura mountains. The first round near or ahead of the cold front can benefit from better CAPE and 10-15 m/s deep-layer shear, hence a multicellular organization is likely, and a few marginally severe hail and wind events are possible next to heavy rain. The second round of postfrontal convection should not bring severe weather anymore due to lower CAPE and weak vertical wind shear in the well-mixed Atlantic airmass. Likewise, remnants of weakening and elevated convection that move into Belgium, Luxemburg and SW Germany overnight should be non-severe.

(2) S France and NW Mediterranean Sea:
Precipitation signals appear surprisingly sparse in high-resolution forecast models (AROME and HARMONIE) but more plentiful in the global forecast models. Against a background of at least subtle synoptic lift and with a pretty weak cap visible in forecast soundings, the more aggressive solutions appear to be more realistic. A few large and very active MCSs are therefore expected throughout the forecast period, though the increasing cap will definitely become an issue when they propagate too far southeastward and away from the favorable synoptic lift.
These storms, and in particular those that grow upscale into large MCSs, can produce all kinds of severe convective weather. The hail, wind and tornado hazards are maximized with tail-end storms towards the south (or at the southern end of an MCS), which can easily turn supercellular and produce very large hail as well as a few tornadoes. The excessive rain hazard is highest in the Cevennes, the southern Massif central and around the Rhone delta in the first half and in the Alpes Maritimes in the second half of the forecast period. Especially in the mountains, some dangerous flash floods may result!
Convection will continue to work its way eastward overnight, possibly also entering the Piedmonte and Liguria regions in NW Italy and Corsica then with an ongoing severe weather threat.

(3) Catalonia:
Sea breezes advect the maritime moisture also a little distance inland. Convective initiation at the sea breeze front and over mountains remains somewhat questionable, as the synoptic and mesoscale lift may not suffice to erode and break the strong capping inversion. Mountains that should be particularly closely monitored for convective initiation in the afternoon to evening are the eastern ends of the Pyrenees and the Sistemo Iberico, whose upvalley and upslope circulations have the most convenient access to the abundant moisture reservoir. In case one or two isolated storms develop and persist, they can organize into strong supercells in an environment of >2000 J/kg CAPE and >20 m/s deep-layer shear, and even very large to giant hail (similar to the 30 August event in NE Catalonia) is possible!
Secondary storms may form at outflow boundaries in the evening or night, perhaps also reinforced by an organized outflow front that will likely push southward from the Lion Gulf. The risk of large hail, severe downbursts and heavy rain remains enhanced with any storm that forms all night long.

The mid-level trough and an attendant surface cyclone leisurely move eastward. The prefrontal airmass is heavily overworked by daily convection, hence lapse rates are rather poor, whereas low-level moisture is plentiful and is also continuously replenished from the Black, Aegean and S Adriatic Sea. After some daytime heating, CAPE up to 1000 J/kg is expected under mostly weak deep-layer shear around or slightly above 10 m/s. This airmass is exposed to pretty convincing, persistent synoptic lift.
Scattered to widespread, poorly organized convection with a peak in the afternoon to evening poses a primary hazard of excessive rain. Especially in E Bulgaria and far-SE Romania, persistent advection of very moist air from the Black Sea can result in one or two backbuilding storm clusters with very high rain accumulations, possibly exceeding 100 mm. This area is upgraded to a level 2.

Robust CAPE, often between 1000 and 2000 J/kg, is in place across wide areas, overspread by 10-15 m/s vertical wind shear. Forecast soundings show only a weak cap, but synoptic subsidence and a rather dry mid-level environment work against forming thermals and updrafts. Therefore, only low probability lightning areas are issued for south-central Italy and the Aegean islands, where the mountains could facilitate isolated convective initiation in the afternoon.
Showers or thunderstorms forming at nocturnal land breeze fronts could produce a few waterspouts, but the low coverage and the lack of visible "hot spots" keep this hazard below a level 1.

Lively shower activity will develop in the stream of polar air. With neutral to marginally unstable stratification and expected clouds tops that barely exceed 3-4 km height, lightning is quite unlikely. If at all, weak lightning activity is favored downstream of the (comparably warm) Baltic Sea and bigger lakes. Severe weather is not expected.