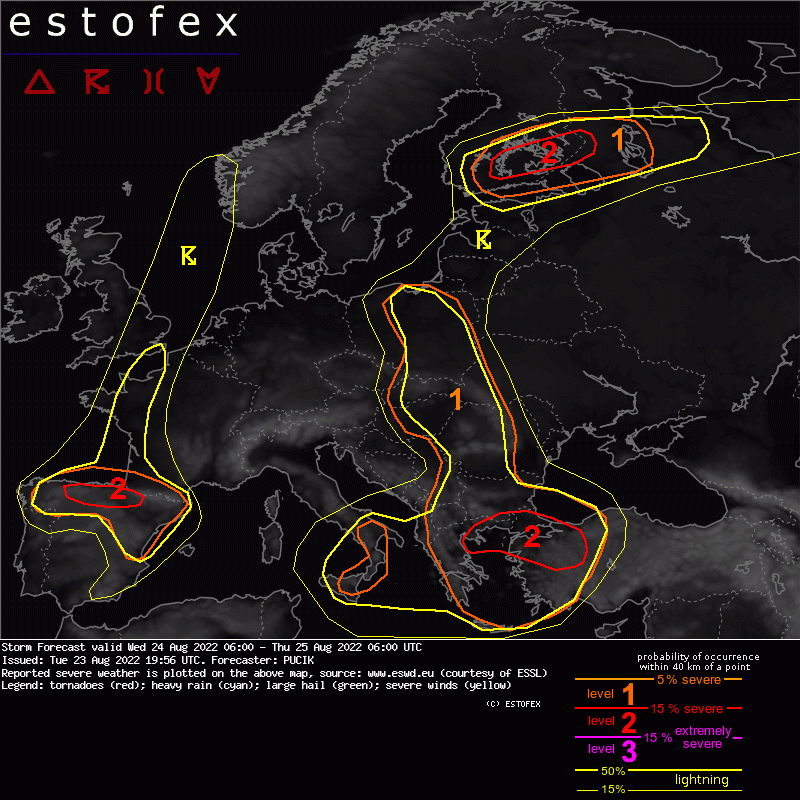 A level 2 was issued across N Spain mainly for large to very large hail and severe wind gusts.

A level 1 was issued across N Iberia mainly for large hail and severe wind gusts.

A level 1 was issued across S Italy mainly for excessive rainfall.

A level 2 was issued across NW Turkey mainly for large to very large hail and severe wind gusts.

A level 2 was issued across NE Greece mainly for excessive rainfall.

A level 1 was issued from Greece through Bulgaria, Romania, Hungary, Slovakia and Poland mainly for excessive rainfall.

A level 2 was issued across S Finland mainly for severe wind gusts, large hail and to the lesser extent for tornadoes.

A rather complex synoptic scale pattern is forecast across Europe on Wednesday. Across the Atlantic, a deep cyclone is simulated at the mid-troposphere, its trough stretching towards SW Iberia. A subtle ridge will cover central Europe, followed by a cyclone across SE Europe. The cyclone will have two separate centers, one over S Italy and another one over the Ionian Sea. Further N, a short-wave trough is forecast to lift across Finland.

Thunderstorms are forecast in two belts of enhanced low-level moisture:
1. From Iberia through W France close to the surface cold front and
2. From SE Europe through Poland into S Finland

Models agree on the lift over NW Iberia, confined to the surface cold front. Combined with the lift from orography, scattered to widespread storms are forecast to form. The most likely area of initiation is within the Lvl 2. Here, steep lapse rates will overlap with 0-6 km bulk shear exceeding 15 m/s, resulting in an enhanced threat of large and potentially even very large hail. Besides the hail, severe wind gust risk will be present given the steep lapse rates. Lvl 1 area will also see the hail and wind risk, albeit with lesser coverage. Storms are expected to cluster towards the late evening hours.

A strong lift is forecast ahead of the trough and widespread storms are forecast to form over the area, especially within the Lvl 2 area. On the Turkish side of Lvl 2, 0-6 km bulk shear of over 15 m/s is forecast to combine with high LCLs and substantial CAPE below the -10 deg temperature zone. Any supercell with thus bear a high threat of large and very large hail. Severe wind gusts are also possible given steep lapse rates, especially further inland. Towards Greece, less shear is expected and slower storm motions will support a transition to the heavy rainfall threat.

A broad Lvl 1 is issued mainly for heavy rainfall due to the slow-moving storms, shear below 10 m/s, and moist profiles. It should be pointed out that a large discrepancy exists between individual models concerning the exact location of storms in the afternoon hours. This will be influenced by the position of a diffuse frontal boundary, orography, and also the extent of overnight and early morning convection. Forecasters thus need to re-evaluate their expectations in the morning hours.

Surface cyclogenesis is forecast across the area with a strong lift on the warm wave of the frontal boundary. Towards the warm front, 0-3 km shear up to 15 m/s is forecast with 0-3 km SRH up to 150 m2/s2. A mix of supercells and linear segments is forecast across the area. Depending on the precise convective mode, the threat of large hail and severe wind gusts will be present. Along the warm front, a tornado is not ruled out given 0-1 km SRH above 100 m2/s2 and low LCLs, given that isolated supercell tracks on the boundary, where enhanced vorticity will be present.