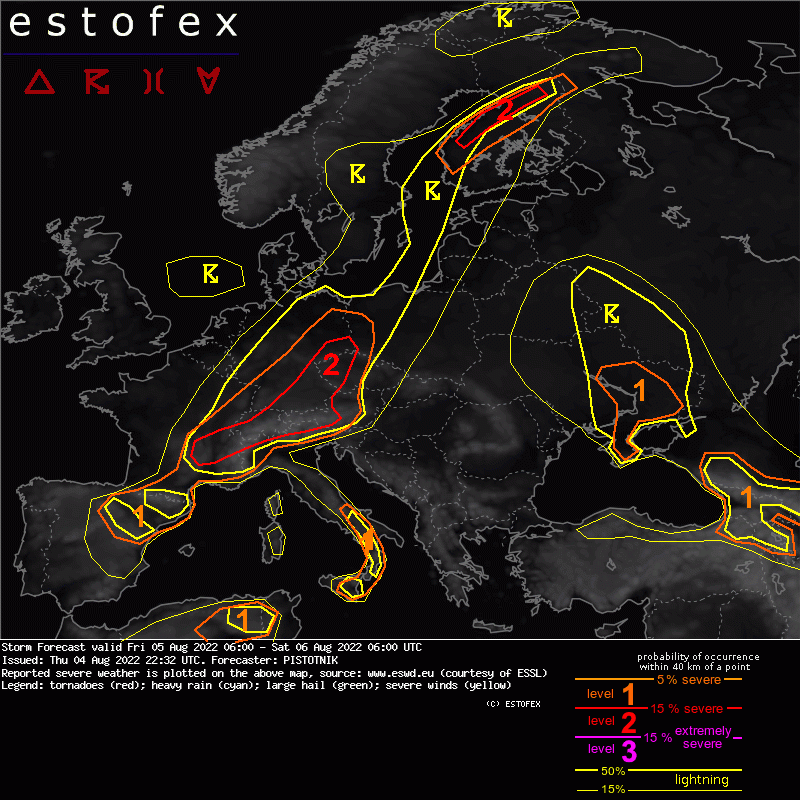 A level 1 and level 2 are issued for parts of Germany and the Czech Republic for excessive convective precipitation, large hail and severe convective wind gusts.

A level 1 is issued for SW Poland mainly for excessive convective precipitation.

A level 1 and level 2 are issued for parts of Finland mainly for severe convective wind gusts and to a lesser extent for tornadoes, large hail and excessive convective precipitation.

Level 1 and level 2 areas are issued for NE Spain, S France, Switzerland, Austria, parts of Italy, parts of Algeria and Tunisia, and parts of the Ukraine mainly for excvessive convective precipitation and to a lesser degree for large hail and severe convective wind gusts.

A pronounced mid-level trough stretches from the Norwegian Sea to France at Fri 06 UTC and slowly translates eastward, crossing much of Scandinavia and Germany until Sat 06 UTC. It is associated with a well-marked cold front in the lower troposphere that spills cool maritime air into the affected regions.
The big rest of Europe is covered by very warm to hot air under high 500 hPa geopotential and calm synoptic conditions. Two large blocking anticyclones over the central North Atlantic and Russia form a bridge of high pressure, which is opposed by slightly lower geopotential over the Ukraine and the Black Sea.

The pronounced cold front continues to slowly track SE-ward, modulated by shallow surges of westerly surface winds resulting from overnight's outflow boundaries and/or heating gradients. While deep and intense daytime mixing allows only very little CAPE in the hot prefrontal air (as Thursday's observations indicated), moisture can accumulate in the temporary "loaded gun" situation of the slightly cooler westerly surface winds. By afternoon, CAPE up to 1000 J/kg - or locally more - is expected to build in this corridor.
Scattered, probably elevated and non-severe storms are likely ongoing along the cold front across N Germany in the morning. The largest uncertainty is connected to the question where and when convection will manage to become surface-based. It is worth mentioning that AROME predicts a quick transition already in the late morning, which would send a possibly severe storm system already into E Germany already around noon. This scenario is reflected by the northward extension of the level 1 area but otherwise deemed unlikely, since the majority of the model pool lets the morning convection fade into a calm period around noon. Given the lack of synoptic lift (positive vorticity advection is largely cancelled by beginning cold air advection) and the dry prefrontal air, it appears quite likely that new initiation of surface-based storms will be delayed to the mid- or even late afternoon. The strongest signals for the first initiation are present over and around the low mountain ranges along the bordering regions between Germany and the Czech Republic, probably followed by a second round over S Germany in the evening as the wind shift line of the cold front and/or outflow boundaries keeps pushing SE-ward.
With moderate CAPE and moderate deep-layer shear mostly between 15 and 20 m/s, storms can organize into multicells and perhaps a few supercells or bowing line segments. Late upscale growth into one or two large clusters is also an option. Depending on the storm mode, large hail (in particular in case of supercells) and severe wind gusts are expected during maturing stages, and especially the dry air and associated large T-Td depression could even promote one or two larger or locally extreme wind events. Later on, heavy rainfall becomes the main hazard, also in the course of the night while the slowly weakening storms spread into Poland and possibly across the Baltic Sea.

Further downstream along the same cold front, the prefrontal airmass is less hot but still warm and rather moist with expected maximum temperatures in the mid-twenties and 2m dewpoints between 16 and 19C. Forecast models agree on a remarkable overlap of low to moderate CAPE (up to 500 J/kg) with even stronger deep-layer shear on the order of 20-25 m/s, thanks to the mid-level jet that surrounds the arriving trough. Wind profiles are predicted to be straight right along the cold front, but could become notably curved ahead of it, the more the stronger a temporary surge of pre-frontal warm-air advection can develop.
Aided by synoptic lift ahead of the mid-level trough and mesoscale ascent along the cold front, at least scattered storms appear quite likely in the afternoon to evening and can quickly organize as soon as they propagate away from the front line. The CAPE-and-shear space would allow bowing lines with a pronounced hazard of severe wind, but also supercells with an enhanced tornado hazard (courtesy to low cloud bases and strong 0-1 km shear often exceeding 10 m/s) next to a possibility of large hail.
In the "failure scenario" that storms cannot detach from the cold front or are undercut by it, at least a period of heavy rain is possible with training convection that is packed into the frontal rainband.

In the very warm to hot air across the SE half of Europe, scattered afternoon storms are expected over various mountain chains, as well as in the range of the faint cut-off low over the Ukraine. CAPE is highly variable, but may at least locally to regionally reach or exceed 1000 J/kg where either moist sea breezes are advected far enough inland to be strongly heated, or otherwise pockets of enhanced moisture can survive the strong daytime mixing. Weak vertical wind shear keeps convection disorganized. A few flash floods are possible, and thanks to steep lapse rates in the hot airmass, also isolated hail or downburst events cannot be completely discarded.
Two areas deserve somewhat more attention:
(1) Over far-SW Russia, Georgia, Azerbaijan and NE Turkey, stronger SW-erly mid-level winds can enhance deep-layer shear to values up to 25 m/s, hence better storm organization is possible and the main hazards shift more towards hail and wind. Capping over the lowlands is pretty strong, though, and it is therefore questionable if storms can detach from the mountains and consume the air with the highest CAPE and the strongest vertical wind shear.
(2) Storm coverage from the Massif Central to the Alps is expected to become quite high, and this belt is therefore upgraded to a level 2. Once more it is worth mentioning that the hot airmass can allow unusually strong convection also over the main Alpine crest, which poses a distinct hazard of damaging flash floods, mudslides and debris flows in these sparsely vegetated altitudes.