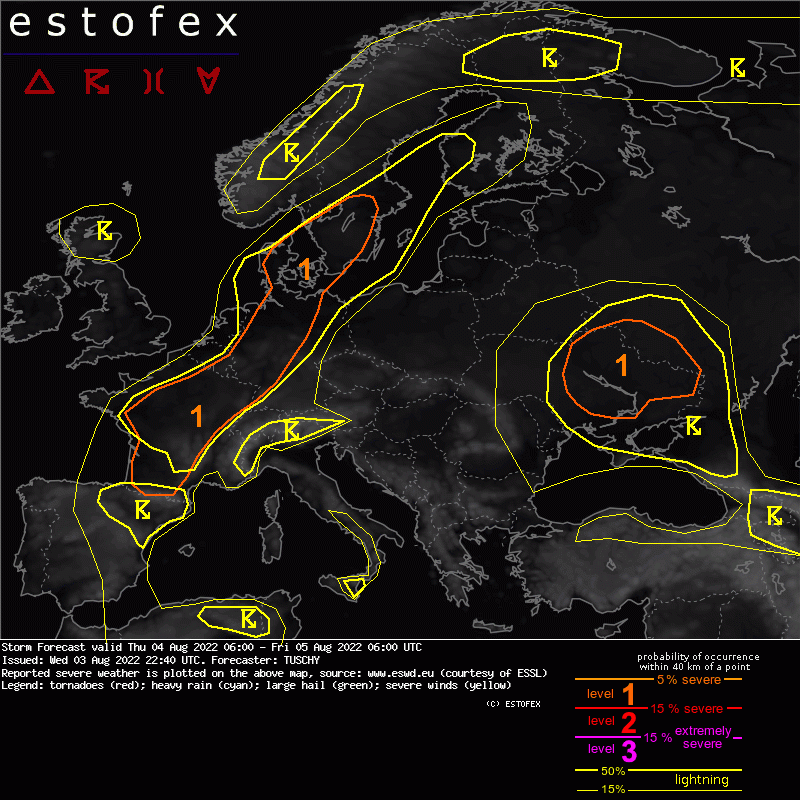 A level 1 was issued across a belt from SW France to S Sweden mainly for large hail, severe wind gusts and heavy rain. A few very large hail events are possible from W-CNTRL to E-CNTRL France.

A level 1 was issued across parts of the CNTRL/E Ukraine mainly for heavy rain.

A slowly eastward progressing wave train over N Europe features a strong ridge from CNTRL Europe to NW Russia and a positively to neutrally tilted upper trough over NW Europe, which approaches the North Sea during the night.

At the surface a leisurely eastbound moving cold front crosses far N France and Benelux during the daytime hours before crawling into far NW Germany during the night.

IFS-ENS indicates a tightly clustered cold front passage with high confidence regarding timing and placement. IFS however remains a bit faster than ICON/GFS and UK10. Overall there is a good NWP handling in this synoptic setup.

A progressive short-wave moves from the North Sea to SW Norway until 18Z and pushes the cold front more briskly to the E over Denmark and into S Sweden during the night. Otherwise a rather smooth SW-erly mid/upper flow regime with no identifiable synoptic-scale lift affects the area during the forecast.

Given the diffuse nature of mesoscale and synoptic-scale lift, we expect more discrete CI over Denmark from noon onwards with convection moving rapidly towards S Sweden.

This activity crosses an unstable and weakly (S-Sweden) to moderately (Denmark) capped warm sector with MUCAPE in the 500-1000 J/kg range. ICON remains a bit more bullish compared to IFS, but even the IFS-EFI CAPE/shear highlights the rather unstable warm sector air mass that far north with patchy positive SOTs. In addition, this warm conveyor belt and attendant warm jet both push EFI water vapour flux in this area up to 0.9 (EFI) with positive SOTs.

Shear is rather impressive next to the frontal zone with 20-25 m/s DLS, 15 to 20 m/s 0-3 km shear and a few point source forecast soundings indicate SRH-3 in excess of 200 m^2/s^2. Hence the risk for a few well organized multicells and supercells is present with large hail and severe wind gusts. Due to the unusual nature of this event with respect to the model climatology, we stay more aggressive than the latest AR-CHaMo output and include the chance for a few large hail events that far north, next to severe wind gusts. The rather high LCLs and well mixed subcloud layers should suppress any tornado risk.
The severe risk vanishes during the night from W to E with the passing cold front.

Over France a cyclonic mid/upper flow regime overspreads modest BL moisture. Some higher BL moisture values are possible over W-CNTRL France with some prefrontal advection of deeper moisture from far SW France. MUCAPE in excess of 2000 J/kg is forecast over far SW France decreasing to 500-1000 J/kg towards CNTRL France.

For most parts of S-France CI remains diffuse with no mesoscale forcing and a rather smooth SW-erly flow regime atop. We stick with ensemble data which highlight the area around the Massif Central and the Maritime Alps with enhanced probabilities for CI due to weak upslope flow. DLS oscillates around 10-15 m/s so a few large hail events and strong to severe downburst events are possible. Cetainly local flash flooding will be the main issue for this event with TPWs between 30-35 mm.

Over far SW France, CI depends on the final cap strength with some NWP guidance like IFS indicating a breakable cap around peak heating. Entrainment could become an issue but any maturing updraft would see 2000 J/kg MUCAPE and less than 10 m/s DLS. Severe pulsating storms with large hail, severe downbursts and heavy rain would be the main issue. We expanded the level 1 into this area to highlight the non-zero chance for CI.

Over CNTRL France into NE France, the main CI probably awaits the approaching cold front and a tightening thermal gradient during the late afternoon into the evening hours. It remains unclear if upscale growing convection from the Massif Central or new development further to the NW becomes the dominant cluster, but most models indicate a nocturnal cluster, which moves NE towards W Germany and Belgium. DLS up to 20 m/s and 15 m/s 0-3 km shear support severe wind gusts and large hail with a few very large hail events during the initiation stage over W-CNTRL into E-CNTRL France (next to a few supercells which traverse the region from the Massif Central to E-France). The severe risk gradually diminishes during the night with a decoupling nocturnal BL and weakening MUCAPE. Heavy rain remains a local issue all night long and becomes focused towards NE France during the end of the forcast.

CNTRL-France could become a borderline level 2 situation (hail and gusts) but current data/uncertainties keep this in the high-end level 1 category for now.

The main chances for CI reside in the vicinity of the slowly eastward propagating cold front and the immediate prefrontal sector which is accompanied by 2m dewpoints up to 15 C and even higher values along the front itself. NWP guidance has major issues where and when to place the CI and overall the models remain rather reluctant. However GFS indicates some LL frontogenesis over NW Germany in a weakly capped environment, which is probably borderline for CI due to the deeply mixed BL and with ongoing background subsidence on a synoptic scale (although weak waves could traverse the area as highlightd by some Q-vector convergence).
Overall confidence in scattered CI is still augmented during the late afternoon over NW Germany into N-CNTRL Germany with up to 1000 J/kg weakly capped MUCAPE forecast. Effective shear is on the weaker side ahead and along the frontal zone (10 m/s DLS) but increases rapidly to 20 m/s in the postfrontal BL NW-erly flow regime behind the front. A mix of elevated convection (to the S) and near surface based convection with rotating updrafts (transient supercells) along and to the N of the front is forecast and large hail/severe wind gusts will be the main issue. Clustering convection enters N-CNTRL Germany during the night before shifting E/NE while weakening (BL stabilization).

The next round will be the approaching French cluster during the overnight hours, which affects W to CNTRL Germany with heavy rain, isolated hail and strong gusts. Although a growing nocturnal BL works against the severe risk, models like ICON D2 indicate a chance for a few rotating updrafts due to rather strong mid-level veering. Large hail remains an issue next to heavy rain (S Belgium, Luxembourg into W-CNTRL Germany). Temporal training is possible as numerous thunderstorms could cross the same area beneath increasing upper divergence next to the right entrance of a strong upper jet to the north. The highest risk extends from NE France into S Belgium and far W Germany beyond midnight.

In the vicinity of a quasi-stationary upper low, a plume of high moisture with TPWs in the 30-40 mm range circles the vortex and gets activated early in the day. Scattered to widespread thunderstorms evolve with slow motion and rapid clustering. Heavy to excessive rain becomes the main hazard next to isolated hail with more robust updrafts (MUCAPE locally up to 1000 J/kg).