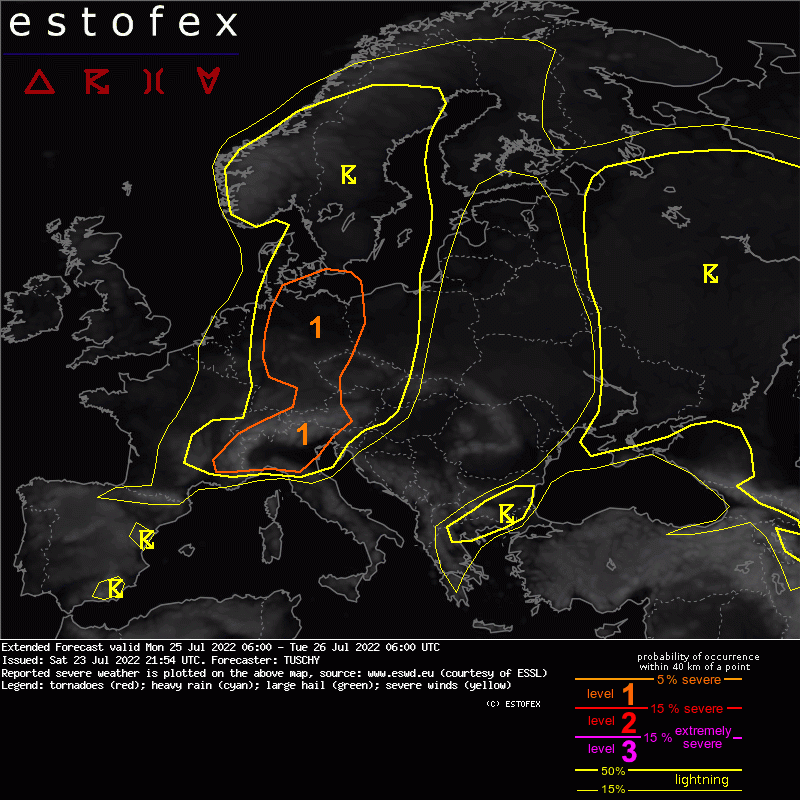 The progressive wave pattern keeps going over N into CNTRL Europe with another wave crossing UK until 18Z before affecting Denmark / N Germany during the overnight hours. Subtropical ridging covers the CNTRL Mediterranean although gradual thickness decrease occurs over W-CNTRL Europe and a more noticeable drop of 850 hPa temperatures is forecast ins this area.

A 995 hPa depression in GFS (also tightly clustered between 995-1000 hPa in IFS-ENS) crosses the sea area Fair Isle into Viking/Utsire while weakening before re-forming in the lee of the Scandinavian Mountains. This low pushes a warm front E over Germany into Poland before multiple cold fronts follow from the NW. In addition, a pronounced convergence zone takes shape in the warm sector so no surprise: the main reason for ongoing uncertainties of this setup emerges of this amount of boundaries. Additionally, there remains a zonal spread regarding the cold frontal placement (e.g. at 12Z) in numerous models with GFS a tad slower than ICON/IFS. IFS-ENS spread is reasonable for this time-frame (covering Benelux) with similar magnitude in CMC-GEPS but much less compared to NCEP-GEPS (which has more than 2K uncertainties along the cold front). So despite an overall good handling of the leading cold front, lingering placement and timing issues keep uncertainties enhanced that far out.

The 500 hPa geopotential height field is stable in all models with just a slight decrease in amplitude of the approaching trough during the past few runs. GFS/GEM have some subtle indications for lifting leading short waves ahead of the main trough, which could also play some role in CI.

There are weak signals of an evolving LL depression over NE Germany next to the convergence zone but large ensemble spread keeps this scenario uncertain for now.

Overall the NWP guidance is rather stable but adequate uncertainties remain which will hopefully be solved by tomorrow.

In Denmark/Sweden, a rapidly thinning warm sector grazes the S/E parts of Denmark and S Sweden. All models show at least some MLCAPE build-up with GFS on the lower end side while ICON/IFS remaining more bullish with locally 400-800 J/kg towards the German border. This CAPE plume sneaks into a strong frontal zone/thermal gradient with rather impressive shear values (next to a surge of anomalously moist air with PWATs in the 2-3 sigma range with prepect to the 79-09 CFSR climatology). 0-6 km shear hovers around 25 m/s with 20 m/s in the 0-3 km layer and long/straight hodographs (although in case of a more defined LL depression over NE Germany, enhanced SRH would come in play). The weak pre/post frontal wind shift and a prolonged period of synoptic-scale lift atop the frontal boundary point to rapid clustering and upscale growing convection. LL lapse rates of 7-8K in the lowest 2 km AGL over SE Denmark into S Sweden would support a strong / severe wind gust threat but right now it looks like most favorable LL lapse rates remain displaced E of the frontal boundary so heavy rain could become the main issue. Nevertheless, mesoscale dictates a temporal severe risk and a regional upgrade to a level 1 may become necessary later-on.

For N into E-Germany it seems like we can see a progressive dry prefrontal convergence zone with a moisture surge behind this wind shift and ahead of the approaching cold front. ID2 however indicates isolated CI along this convergence zone which is certainly possible. Any cell in this regime would see impressive convective boundary layer mixing up to 700 hPa with 10 C/km 0-3 km lapse rates and LCLs aoa 2.5 km AGL, so damaging gusts would be the main issue next to hail (with 15-20 m/s DLS). Any line-up would mean potential swaths of gust peaks in excess of 65kn, which seems possible for NE Germany into the S Baltic Sea right now (low-end support in EPS for this gust magnitude).

Further W and S, scattered CI along the cold front is possible during the afternoon hours within a CAPE/shear space of 20 m/s DLS and 15 m/s 0-3 km shear with elongated/straight hodographs. However there remains some model spread regarding the magnitude of CI as some show strong thickness decrease/LL CAA overspreading the surface front which would supress CI somewhat.
However, initiating convection is forecast to intensify rapidly with deviating storm motion as dynamic pressure perturbations evolve, so a mixture of multicells/supercells is forecast. Betimes this convection tends to line-up and with increasing (cold pool/RIJ driven) speed, this convection may outrun LL moisture and enter the better mixed air mass to the E. Hence severe/damaging wind gusts next to hail would become the main issues along bow echo tracks mainly over CNTRL/N/E Germany. In case of currently anticipated better LL moisture over N-Germany, isolated hail in excess of 5 cm is possible. Finally, if we get enough backing of the LL wind field ahead of the cold front, an isolated tornado event is also possible as LCLs drop to 500-800 m AGL .

CI over S Germany awaits the cold front, which crosses the area during the overnight hours. 850 hPa temperatures of 20 to 23 C until 18Z should cap everything (beside the bone dry airmass and no stronger synoptic- or mesoscale forcing mechanism). During the night, the passing trough should spark a cluster of storms with main issues being isolated hail and rain (DLS around 15 m/s).

For now we kept most of Germany in a broad brushed level 1 because of ongoing uncertainties. If either the convergence zone or the cold front or both become ready for CI, a corridor of level 2 conditions (wind/hail) over parts of CNTRL/N Germany into E Germany seems possible.

With a slight positive tilt of the upper trough, CI in this area is delayed until the late afternoon into the overnight hours. DLS is in the 10 to 15 m/s range over N Italy and increases to 20 m/s next to the frontal zone (SE France, where 0-3 km shear increases to 15 m/s). CAPE remains in the 500-1000 J/kg range with a tongue of up to 2000 J/kg over NW Italy.
Initiating convection (mixture of multicells/isolated supercells) poses a hail/severe wind gust threat and a few very large hail events cannot be ruled out (especially between Turin and Milan).
For N-Italy CI remains more diffuse as the cold front becomes blocked by the Alps and probably focused to the passing upper/thermal trough. Expect level 1 conditions with scattered thunderstorms moving E, probably part of a large cluster of showers/thunderstorms, which affects the Alps from W to E. Convection may line-up temporarily over NE Italy, but there could be some capping issues next to borderline DLS of 15 m/s for organized convection.