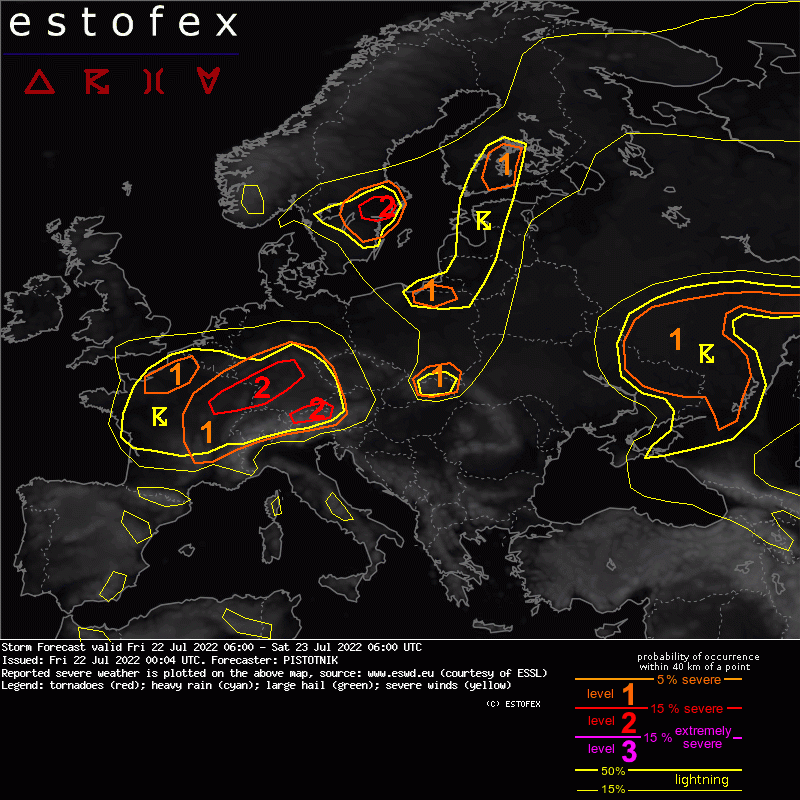 A level 1 and level 2 are issued for parts of Austria and far-south Germany for large hail, excessive convective precipitation and to a lesser degree for severe convective wind gusts.

A level 1 is issued for parts of Slovakia and for S Poland for large hail, excessive convective precipitation and to a lesser degree for severe convective wind gusts.

A level 1 and level 2 are issued for central, S and E France, Luxemburg, central Germany and Switzerland mainly for severe convective wind gusts, large hail and to a lesser degree for tornadoes.

A mid-summer pattern is in place with a rather weak frontal zone that runs from the Celtic Sea to France and Germany before it curves northward into Scandinavia. Two short-wave troughs are embedded in the flow, the western one shifts from England and France across BeNeLux into Germany, the eastern one crosses Poland and the Baltic Sea. The frontal zone seperates temperate maritime air to its northwest from hot air that stretches from Spain across the Alpine region into the Baltic States and Finland.
Very hot air under quiescent weather conditions covers also the entire Mediterranean region. Eastern Europe is largely influenced by a quasi-batrotropic cut-off low centered near the Russian-Ukrainian border that brings cool to moderately warm, unsettled conditions.

The stationary, diffuse frontal zone and a return of warm air advection aloft create a prime environment for moisture accumulation at low levels, which will likely support 2m dewpoints in the upper tens and CAPE in the 500-1500 J/kg range in a rather narrow belt on the immediate warm side of the frontal zone. Along the north Alpine foothills in Austria and far-south Germany, where moist northeasterly upvalley circulations ideally undercut the steep lapse rates of the hot airmass, even 2m dewpoints around 20C and CAPE up to 3000 J/kg appear likely by late afternoon. This belt of moderately to strongly unstable air is overspread by deep-layer shear around 15 m/s beneath the fringes of the jet stream.
In the absence of synoptic lift, primary convective initiation is expected to happen rather late and isolated, and will strictly be tied to the mountains. Forecast models agree on two hot spots over the Tatra mountains along the Polish-Slovakian border and in W to central Austria, whereas the lowlands separating the Tatras and the Alps will likely stay devoid of convection. Storms can organize into strong multicells or temporary supercells and may propagate some tens of kilometers into adjacent forelands in the evening, reinforced by secondary initiation at outflow boundaries. Curved wind profiles in the warm air advection regime favor right-moving storms, but these will stick to the mountains and face increasing competition as the evening proceeds, whereas the odd left-movers have better chances of feeding on the rich moisture reservoir and attaining supercell structures. The main hazards are excessive rain and large hail, plus perhaps isolated severe downbursts. A brief window for a few possible very large hail events opens up when left-moving storms detach from the Austrian Alps and enter the forelands. It is worth mentioning that - contrary to climatology - also the high elevations of the main Alpine crest face an unusually high hazard of severe, well-organized storms in such a hot airmass, which can import enough moisture also into the otherwise dry intra-Alpine valleys.

While moisture recovery and CAPE buildup are more sluggish than further east, both synoptic lift and vertical wind shear steadily increase as the western short-wave trough overspreads this region. In the evening and overnight, CAPE between a few hundred and around 1000 J/kg and deep-layer shear between 15 and 20 m/s, locally even more, should be in place in the warm sector of a subtle frontal wave that is nudged by the increasing synoptic lift. At least partial decoupling of near-surface air in conjunction with the tightening wind field in the free atmosphere also enhance the 0-1 km shear, regionally exceeding 10 m/s.
Scattered storms are expected to form near the frontal zone in central France around noon or in the afternoon. With the arrival of synoptic lift, storms should quickly move eastward into Luxemburg and Germany and increase in coverage in the evening and in the first half of the night, and at least some of them should manage to stay based at the surface or root down to it. Depending on the storm mode (linear vs. discrete), severe wind and/or large hail are the main hazards. The output of high-resolution forecast models leans towards a few bowing line segments rather than discrete multi- and supercells, hence the wind hazard is emphasized and also a few swaths of concentrated severe winds are not ruled out. In addition, low cloud bases and enhanced 0-1 km shear point to the possibility of one or two tornadoes, either with supercells or at the flank of bowing line segments. A level 2 is issued for those areas where the highest storm coverage and the best chances for surface-based convection are expected.
Signals are more mixed for S and E France and Switzerland, where both a round of orographic afternoon storms or overnight initiation with the late arrival of the mid-level trough are possible, but none of them is certain. It is also unclear how far eastward the convection in Germany will move until the end of this forecast period, Sat 06 UTC. These uncertainties are covered by a level 1.

... S Finland across the Baltic States into E Poland ...

In this belt, the frontal zone acts as a cold front and moves slowly eastward. Moisture accumulation ahead of it allows CAPE up to 1000 J/kg, but low-level cold air advection also creates a strong cap that is difficult to overcome. While isolated to scattered storms are possible throughout the forecast period, their bulk will likely be delayed to its second half when synoptic lift starts to overspread the cold front. Under 10-15 m/s deep-layer shear, multicells are the most likely storm mode. The main risk is heavy to locally excessive rain, most notably in S Finland. Otherwise, isolated large hail and severe events are possible in case convection roots down to the surface.

On the cyclonic flanks of both mid-level troughs as well as under the Russian cut-off low, moist air with CAPE mostly on the order of some hundred J/kg is exposed to strong synoptic lift. Under weak vertical wind shear, scattered to widespread, mostly daytime-driven storms are expected. The main hazard is excessive rain.
A small part in SE Sweden, where the inflow of plentiful low-level moisture from the warm Baltic Sea is maximized, is ugraded to a level 2, while the other regions are covered by level 1 areas.
In addition to the flooding hazard, a few waterspouts might spin up in coastal areas.

Only isolated (if any) storms are expected over orographic features in inland areas in the hot, deeply mixed airmass. Most of the falling precipitation will evaporate before it reaches the ground. The main hazard (not explicitly covered by ESTOFEX) are new bush or forest fires triggered by lightning strikes. Localized strong to severe, possibly dry downbursts are not ruled out, either.