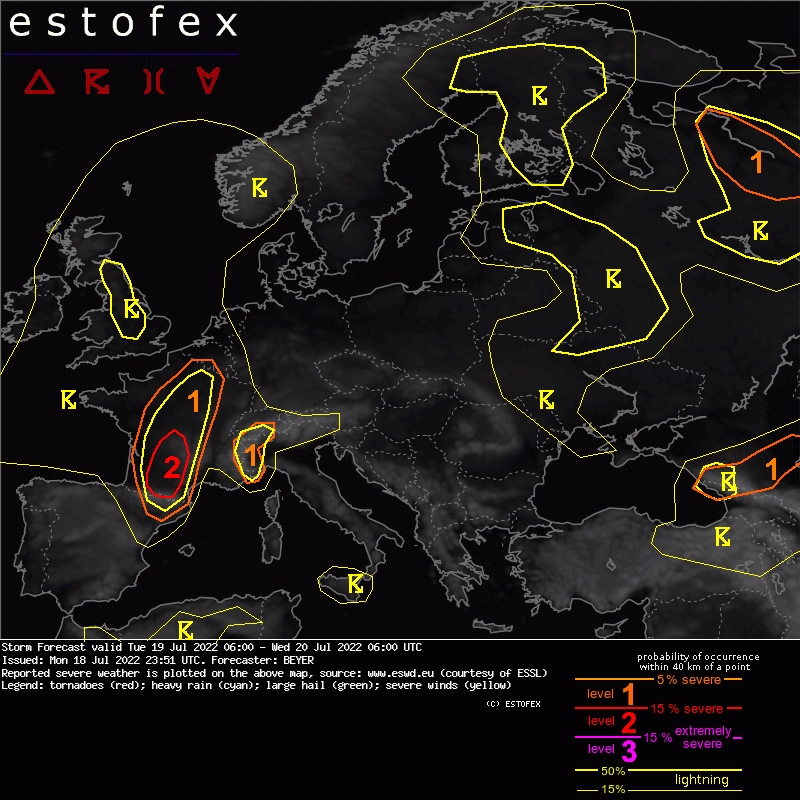 A level 2 was issued for S to C France for large to very large hail, severe wind gusts, and excessive precipitation.

A level 1 was issued for parts of Spain and France into far S Belgium extending the level 2 for overnight activity mainly for excessive precipitation and to a lesser extent for large hail.

A level 1 was issued for the W Alps and the Sea Alps mainly for excessive precipitation and to a lesser extent for severe wind gusts.

A level 1 was issued for parts of W Russia mainly for excessive precipitation and to a lesser extent for tornadoes.

A level 1 was issued for S Russia adjacent to the Caucasus Mountains mainly for excessive precipitation and to a lesser extent for tornadoes.

An unusual strong long-wave ridge is present over C Europe and moves slowly eastward during the forecast period. At the same time, a cut-off upper-level low is present over the Bay of Biscay moving to the English Channel during the night to Wednesday. On its forward flank, a hot airmass is advected far to the North. This record-breaking heat will bring new temperature records to many parts of W and C Europe.

This hot airmass is also characterized by a strong elevated mixed layer with steep lapse rates (1 to 4 km) but a very dry BL. A dry surface trough with strong cold air advection is passing France during the forecast period from W to E and reaches Germany during the night.

Further to the east, an upper-level trough influences W Russia and parts of E Europe with rather cool and unstable airmasses. Several short wave features can be found along the flanks of the UL low. A pronounced short wave trough is moving southward on the W flank of the trough during the night hours.

As already mentioned in the synopsis the hot and record-breaking airmass is characterized by a deep elevated mixed layer but also very dry BL with low dewpoints and values of specific humidity. The forming surface trough that extends from Great Britain to N France and is moving eastward, will thus pass completely dry with a sharp shift of LL winds and a strong pressure rise further upstream that may bring a few strong wind gusts but no convection.

At the same time, mid-level and deep layer shear is strengthening from the west. Low-level wind profiles show a nice veering and up to 200 m^2/s^2 of SRH0-3 is forecasted. As a result, the initiated storm may rapidly develop into rotating supercells.

These mesocyclonic storms may bring large to very large hail taking into account the steep mid-level lapse rates and MUCAPE values of 2000 to 3000 J/kg.

At the same time, DCAPE values of around 500 J/kg are present having an inverted-V low-level profile. Thus also severe wind gusts are possible. LAMs point to wind gusts of well above 25 m/s with those initiated storms.

During the late evening and night hours, the convection is forecasted to move further north related to the synoptic scale forcing of the trough. Having rather parallel shear vectors (pointing S to N) along the organizing feature convection is forecasted to cluster into a linear MCS. Precipitable water has values of up to 40 mm and convection may repeatedly move over the same region. As a result, there is an enhanced threat of excessive precipitation while the chance for large hail is decreasing during the night hours.

At the end of the outlook period, convection should reach NE France and S Belgium but the threat of severe weather is decreasing.

Synoptic scale forcing in this region is rather weak but thanks to the orography somewhat enhanced LL moisture (advected with S winds from the Mediterranean) can overlap with the steep lapse rates. As a result CAPE values of up to 1000 J/kg are forecasted to develop.

Given very weak wind shear clustering convection along the orography is forecasted to develop in the afternoon hours. Storms are forecasted to be only slow-moving and therefore excessive precipitation is a prominent threat in this region. In addition, low levels are dry with inverted-V profiles. Thus, especially at the beginning, also strong to severe wind gusts cannot be excluded.

A lot of convective activity due to the UL trough is forecasted over W Russia. Strong and persistent convergence is predicted in the region of the surface low that is situated perpendicular below the mid to upper-level low. Precipitable water is forecasted to have values well above 30 mm. Repeated convection enhances the threat of excessive precipitation in the LVL 1 area.

In addition, there is a chance for one or two type-II tornadoes having weak low to upper-level converging winds around the low-level center as well as very low LCLs.

Low-level winds are forecasted to be rather weak and LCLs are close to the surface. As a result, we would not exclude waterspouts from these storms.

Further inland almost no CAPE is forecasted. However persistent and strong precipitation can be found in some of the models. These precipitations may be convectively enhanced. Thus the LVL1 was extended further inland to account for an enhanced threat of excessive precipitation also having in mind the high values of precipitable water (40 to 45 mm).