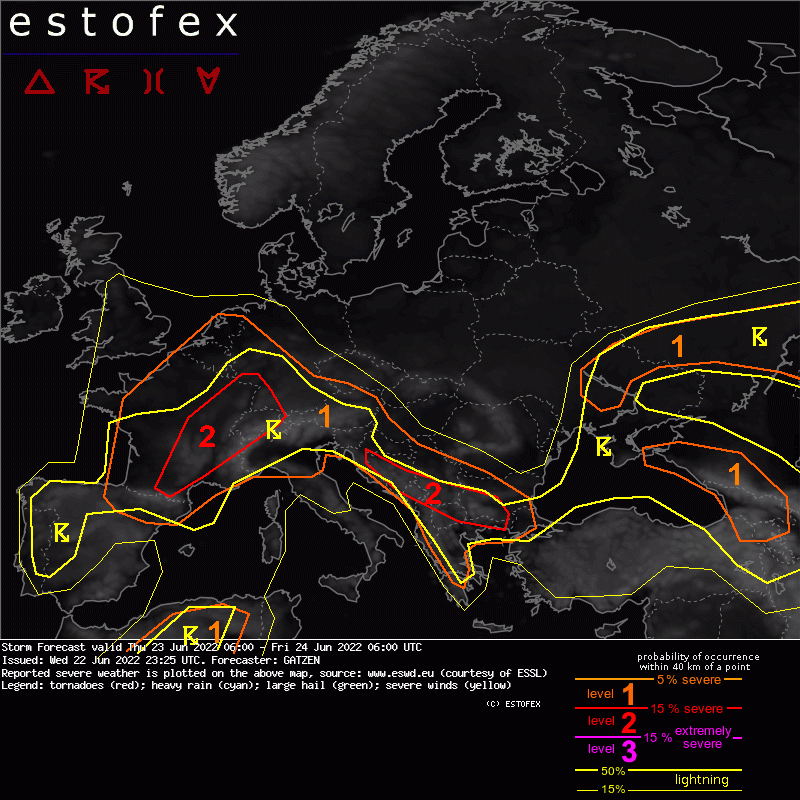 A level 2 was issued across southern and eastern France, western Switzerland, and south-western Germany for hail and wind gusts.

A level 2 was issued for the Balkans for large hail and severe wind gusts.

A level 1 was issued across central Ukraine to southern Russia and across the east Black Sea area for heavy rain.

A level 1 was issued across northern Algeria for large hail and severe wind gusts.

Anticyclonic wave breaking will lead to a blocking high over northern Europe. Regions of low geopotential frame the building ridge, with centers across the Black Sea and Iberia. A jet curves around these troughs and features a central Mediterranean ridge. Both flanks of the ridge will anticipate some QG forcing due to mid-level vort-maxima travelling with the strong jet.

A moist air mass will become unstable in response to low-level heating. Convection initiation is likely across southern and eastern France in an uncapped air mass ahead of an approaching cold front over western France. Widespread storms are forecast that will quickly organize in 20 m/s deep-layer shear. Large hail is forecast initially, but storms are expected to rapidly merge to an MSC thanks to increasing 0-3 km southerly shear. Severe wind gusts will become the major threat while the MCS moves north-east before it slowly decays in weaker CAPE - shear environment over Germany. Together with the wind threat, heavy precip can affect the region.

Scattered thunderstorms are forecast over the mountains that move with the westerly to northerly flow. Strong vertical wind shear will allow for supercells capable of large hail and severe wind gusts. Threat spreads south with a vort-max travelling into the Balkans.

Moist air wraps around the east-European trough, with strong convergence and storm movement parallel to the area of strongest lift. Moist profiles and skinny CAPE indicate the heavy rain threat.

isolated storms over the mountains will organize in strong deep-layer shear, with large hail expected. Inverted-v proviles support severe wind gusts as ell, especially in the eastern part of the level 1.