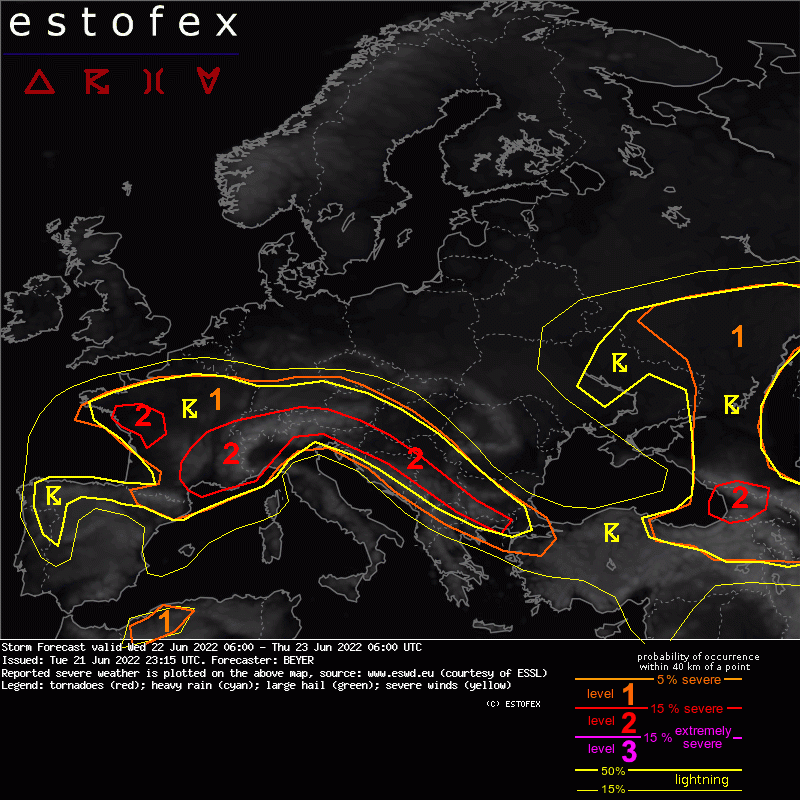 A level 2 was issued for NW France mainly for excessive precipitation.

A level 2 was issued for SE France, the Alpine region (including parts of Italy, Switzerland, Austria, and Germany mainly for severe wind gusts, large hail as well as excessive precipitation.

A level 2 was issued for N parts of the Balkan mainly for severe wind gusts and large hail and to a lesser extent for excessive precipitation.

A level 2 was issued across West Georgia mainly for very excessive precipitation.

A level 1 surrounds the LVL 2 and extents further north into Russia mainly for excessive precipitation.

A level 1 was issued for parts of Algeria mainly for large hail, severe wind gusts, and to a lesser extent for heavy precipitation.

A rather persistent general weather pattern influences the forecast area that had not changed a lot compared to Tuesday.

An upper-level low is situated over N Spain and the Bay of Biscay. Its diffluent forward flank influences France and the Alpine region with moist and unstable air masses that provide moderate MLCAPE values of several hundred up to 1500 J/kg. As the days before this can overlap with ample DLS.

Further downstream a weak ridge is present but the airmass in interplay with the orography is still capable of convective activity during the day.

For the region extending from the Alps to the N Balkans a ML short wave trough is forecasted to move southeastward during the forecast period. It is for instance visible in the Q vector field at 700 hPa.

Another UL low is situated north of the Black Sea its diffluent forward flank influences the Caucasus and parts of Russia. Again humid and unstable airmasses are present.

This area is influenced by moist airmasses with specific humidity that has values of up to 13 g/kg. In addition, precipitable water is high with values of 35 to locally 40 mm. Embedded in a surface trough extending from the low-pressure center over C France northwestward strong and persistent convergent flow is forecasted. That should lead to heavy and long-lasting precipitation. With the given CAPE of a few hundred J/kg this precipitation is convectively enhanced. Even global models forecast high amounts of rainfall.
In the LVL2 area, there is a high probability of heavy rain and subsequent flooding.

Convection is still ongoing from nighttime activity when the outlook period starts. After a certain minimum new convective development is forecasted for the second half of the day.
As on the days before CAPE of a few hundred J/kg up to 1500 J/kg is present and can overlap with DLS value of 15 to 25 m/s. Developing storms, therefore, have a high chance of becoming supercells that may bring large to very large hail, and severe to damaging wind gusts.

Hodographs in most areas again look mostly linear which enhances the possibility for storm splitting.

The initially discrete storms are forecasted to cluster later on. Mesoscale clusters and even one or two MCSs are possible that may develop bowing segments with widespread damaging winds. Also, the threat of excessive precipitation is enhanced with those systems.

The activity will last well into the night hours.

Moist and unstable airmasses are present but shear and storm motion are much weaker than further south. In addition, convergent surface flow is present and precipitable water reaches values of up to 40 mm. Therefore, in the LVL 1 area north of LVL 2 the main threat is excessive precipitation that may lead to local flooding.

The airmass in that region is comparable to that over the Alps. MLCAPE of several hundred to 1500 J/kg and DLS of 15 to 25 m/s are present. A short wave feature, best visible in 700 hPa should provide additional lift besides mesoscale and orographic lift mechanisms.

Several storms are forecasted that move southeastward and
may also organize in a larger system. Some high-resolution models give hints for severe to damaging wind gusts that may extend to NW Greece and NW Turkey. With discrete storms also large to very large hail is possible.

Very moist airmasses with up to 14 g/kg of specific humidity are present and precipitable water has values of 35 to locally more than 40 mm. A few hundred J/kg of MLCAPE are present and models suggest repeated and convectively enhanced precipitation that may bring large amounts of rain and subsequently lead to flash floods and larger flooding events. A weak mid-level flow and LL convergence support the forecast

A few hundred J/kg of MLCAPE can overlap with DLS of up to 25 m/s and SRH0.3 values of more than 300 m2/s2. Initiation is though a bit questionable. Storms that develop may produce large hail and severe wind gusts.