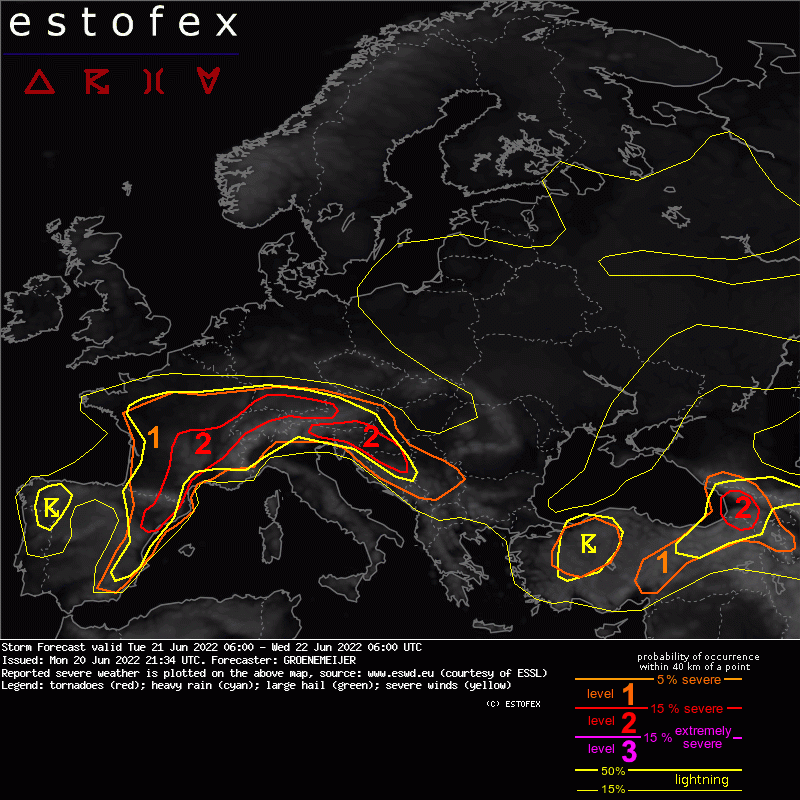 A level 2 was issued across Eastern Spain, France, parts of Switzerland, southern Germany, and northwestern Austria for (very) large hail, damaging winds, and to a lesser extent for heavy rainfall.

A level 2 was issued across West Georgia primarily for very heavy rainfall.

A level 1 was issued across West Turkey for large amounts of hail and very heavy rainfall accumulations.

A mid/upper-level low over Northwest Iberia remains more or less stationary, while a weak upper-level shortwave trough moves northeastward across Iberia into South France. At lower levels, a baroclinic zone that forms the northern boundary of an elevated mixed layer extends across Iberia to south France and across the northern Alpine forelands into the Northwest and West Balkans. Ample shear and moderate CAPE are generally in place or will form during the day, setting the stage for another day of severe weather with large to very large hail and locally damaging gusts the most prominent hazards. Much further downstream, across Georgia, a moist upslope flow of unstable air aided by an upper-level trough should create the setting for a potentially significant (partly) convective heavy rainfall event. Further north, across Northeast Poland, Southeast Lithuania, and North Belarus an almost stationary occluded front or 'trough of warm air aloft' could create a somewhat impactful non-convective heavy rainfall event.

Ample low-level humidity with dew points of 18-20 C across lower and 14-18 across higher terrain is expected across the level 2 axis. Within this axis, 1500-2000 J/kg of MLCAPE and locally higher courtesy of steep lapse rates above the boundary layer that extend to 600 - 500 hPa. Convective initiation is expected across the mountains of East Spain and Central France. As 20-25 m/s of rather unidirectional deep-layer shear is in place, splitting storms are expected with a threat of very large (> 5 cm) hail and locally damaging winds. It is possible that some storms will develop into bow segments with a more widespread damaging wind gust risk. The centre of convective activity should move from East France to Switzerland into South Germany during the afternoon and evening. During the evening, storm coverage is forecast to increase over far northern Spain and south-central France in response to the upper-level trough. These storms may initially also produce (very) large hail. North of the level 2 axis across France, CAPE and wind shear are lower, but they should be sufficient for sustaining more isolated to scattered severe storms.

Much like further upstream, strong shear with about 25 m/s between 0 and 6 km will also be in place across this region along with considerable instability and low-level humidity yielding 1500-2000 J/kg of MLCAPE. The resulting convective types will likely include supercells capable of very large (> 5 cm) hail and bowing segments. Convection-permitting models suggest that a rather widespread convective wind even may develop as a bowing system develops in the early afternoon across Slovenia, which moves across Central Croatia and Bosnia-Hercegovina during the late afternoon and evening. More isolated severe (supercell) storms with hail as the primary threat are possible across the southern Alps of Northern Italy, across eastern Austria, adjacent regions in Hungary, and across much of Serbia.

In the vicinity of a mid/upper-level low, widespread storms are forecast across western Turkey. Because of the slow movement, these storms may produce locally high accumulations of marginally severe hail as well as high rainfall amounts.

Ahead of the mid/upper-level low, storms benefit from stronger shear across parts of South and East Turkey which suggests that some larger hail may occur with better-organized convection compared to West Turkey. Across Georgia, shear is weaker, but the combination of synoptic-scale upward motion and eastward, an upslope low-level flow of very humid air will produce very high rainfall amounts, locally of 100-200 mm in 24 hours. The rainfall event that will gradually become less convective in nature will continue until after the forecast period.