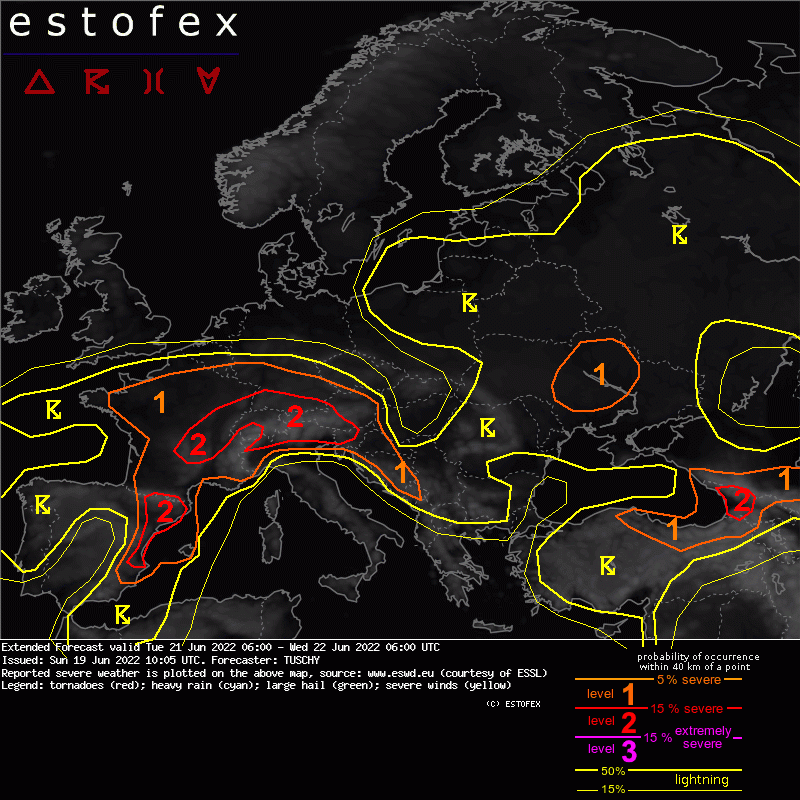 A level 2 was issued across parts of E/NE Spain mainly for large to very large hail and severe wind gusts. A few extreme events are possible.

A level 2 was issued across parts of SE/E France into S Germany, Switzerland, N-Italy and parts of Austria mainly for large to very large hail and severe wind gusts. A few extreme events are possible.

A level 2 was issued for parts of Georgia mainly for excessive rain.

A level 1 was issued for parts of the Ukraine mainly for a few severe wind gusts. Isolated hail is possible.

A broad ridge over S-CNTRL Europe remains entreched between a strong upper trough over far SW Europe and another longwave trough over SE Europe. Additionally a potent upper low (with an imprint in the low tropospheric pressure field) circles the eastern fringe of the ridge while crossing Poland, Belarus and the Ukraine.
Starting from this cut off/broad surface low, a cold front extends to the Balkan States, bending towards the Alps while transforming into a warm front and finally merging with another diffuse and partial diabatically driven surface low over France. Embedded in this meridionally aligned surface low runs a wavy frontal boundary from W-CNTRL France to E Spain.

The trend in NWP guidance is to increase the amplitude of the trough over the Iberian Peninsula from run to run as more energy arrives from the NW out of an anticyclonically curved supergeostrophic jet over the NE Atlantic. No real energy release in form of a lifting short wave is expected and seen in such a configuration along the E fringe of this trough. In addition, slight run-to-run thickness increase is forecast (e.g. over SE France). Otherwise no major discrepancies in the model guidance exist.

Overall an impressive CAPE-shear space evolves in the warm sector, framed by the aforementioned synoptic-scale fronts and covering the highlighted area.

It seems reasonable to have a reservoir of rich BL moisture over SW/W France (albeit worked over by frequent thunderstorm activity during the previous days), which pushes E during the day in tandem with a diurnal increase of the diffuse and zonally aligned surface low over N France. Mid-level lapse rates remain neutral due to the displacement of the LL thermal ridge to the E. This eastbound pushing moist air advects beneath a strong EML over SE France, the Alps and S Germany/N-Italy. An extensive corridor with 1500-2500 J/kg MLCAPE emerges from this set-up with lower readings over SW/W France.

A NE-ward spreading (ejecting) mid-level speed maximum weakens betimes, but keeps DLS in the 20-30 m/s range for most of the period over the unstable warm sector. 0-3 km shear is also enhanced with 15-20 m/s, although a gradual weakening trend is forecast until the overnight hours. Hodographs are long and rather straight but offer better curvature from SE France to Switzerland with more backed low-tropospheric flow.

Weakening residual convection from the previous night impacts CNTRL/N France before noon. Models let the convection die, which is already dubious given ongoing WAA regime where activity is embedded in. Beside that, there is a chance for a weak MCV event emerging out of this activity, which may also push activity futher NE than currently anticipated. Either surviving convection or MCV driven activity may re-intensify over NE France into W Germany during the afternoon/evening hours as activity rides along the lifting warm front to the SE into the CAPE rich air mass. The result would be an augmented risk for an MCS event from NE France into CNTRL Germany if this activity manages to build SE-wards (also dependant on how fast any potential MCV outrides the warm front to the NE). This activiy is still highly uncertain.

The other uncertainty remains the diffuse forcing with not much input from the synoptics and the mesoscale (at least that's what is currently indicated in 850/700 hPa frontogenesis forecasts). However a corridor of enhanced BL convergence between southerlies and westerlies evolves over S-CNTR France, where orographic support should aid in CI. This corridor is also highlighted in ensemble fields by enhanced probabilities for heavy rain. This aligns also nicely with the highest CAPE/shear EFI/SOT values including the most impressive moisture flux values. Elsewhere CI is uncertain and probably isolated during the daytime hours, pobably awaiting somewhat better background conditions during the overnight hours or convection from NE Spain (e.g. SW France).

Hence a confined level 2 was issued, where confidence in robust CI is the highest. Firing convection with mentioned background shear support organized multicells/supercells with large to very large hail, severe wind gust and locally excessive rain. Betimes, upscale growth is forecast while approaching the Jura/Vosges Mountain and SW Germany/NW Switzerland later-on and a forward propagating severe MCS may cross the level 2 from W to E.

Adjustments to the level 2 are probable with ongoing uncertainties including a potential upgrade to a level 2 for parts of SW France (connection to the Spanish level 2). Also level 1/2 areas over SW/CNTRL Germany may need adjustments to the north in case of the first scenario, described above.


Further foci for DMC activity along the periphery of the ridge include:

Ahead of the gradually estward mixing wavy front, rich BL moisture (partially due to onshore flow) beneath steep mid-level lapse rates offer capped 2-3 kJ/kg MUCAPE, although cap erodes from W to E. This front and the orography spark scattered thunderstorms, which organize rapidly in a 20-30 m/s DLS environment with fat mid-level CAPE profiles. Large to very large hail (hail diameter in excess of 5 cm) is the main threat next to severe downbursts and locally excessive rain. Despite mixed signals in ensemble data regarding CI, confidence is adequate for a small level 2 area. This activity may push into SW France later-on and may cause the aforementioned level 2 upgrade for this area.

We expanded the level 1 far E to the Balearic Islands for isolated to scattered overnight storms. Despite ongoing capping issues, MUCAPE in excess of 2kJ/kg with intense speed/directional shear atop the cap support large/very large hail and heavy rain issues.

BL moisture in excess of 15 g/kg mixing ratios beneath an EML pushes MLCAPE in excess of 2000 J/kg just S of the Alpine foothills within a 20 m/s DLS and 10-15 m/s 0-3 km shear environment. Steep LL lapse rates and dry/deep subcloud layers with LCLs aoa 1km point to a severe/damaging wind gust threat with large to very large hail. Weak background forcing and isolated/scattered CI may support discrete to semi discrete supercells for a prolonged period of time before upscale growth occurs. Ensemble support is adequate for upgrading to another level 2 area. This activity may push into Slovenia during the night with an ongoing severe risk.

... Slovenia into Bosnia and Herzegovina ...

Yet another corridor with enhanced severe probabilities evolves along the NW-SE aligned warm front with a similar CAPE-shear space copmared to N Italy (MUCAPE aoa 2kJ/kg with 20 m/s DLS). Initiating convection over SE Austria into Slovenia organizes rapidly into multicells/supercells with large/very large hail and severe wind gusts. Right now the main uncertainty is how widespread CI will be and if upscale growth into a forward propagating MCS towards Bosnia and Herzegovina is possible. In that case, swaths of severe wind gusts including large hail would make an upgrade to a level 2 necessary later-on. Right now a broad level 1 was issued to highlight the main area of interest. Parts of far SE Austria and Slovenia may see multiple rounds of severe (including overnight convection from N Italy).

Ahead of an approaching upper low, strong/persistent low-tropospheric onshore flow occurs towards Georgia with BL mixing ratios in excess of 15 g/kg. Neutral lapse rates aloft still offer 1-1.5 kJ/kg MLCAPE with 20-25 m/s DLS. Large hail and a few severe wind gust reports will become the first issue. Betimes however, rapid upscale growth is forecast within a very favorable excessive rainfall environment during the overnight hours: PPWs in excess of 40 mm with 300-600 J/kg MUCAPE beneath the left exit region of a powerful upper jet and ahead of a sharp upper trough. Global models already indicate 12-h rainfall amounts in the 60-160 l/qm range and excessive rain including flash flooding is likely.

Along the periphery of the upper low, conditions improve for a regional overlap of enhanced 0-3 km CAPE with stronger flow, (e.g. far NE Poland), but run-to-run inconsistency including variable CAPE/shear spaces in other models preclude any level 1 area for now. An isolated tornado risk next to hail could be an issue.

A passing cold front with a mixture of ordinary/multicells (5-15 m/s DLS) poses mainly a wind threat due to very dry prefrontal conditions wthin the lower troposphere. Isolated hail is possible, too, in strongest storms. A confined wind driven level 1 was added where all models indicate CI and lines of convection.