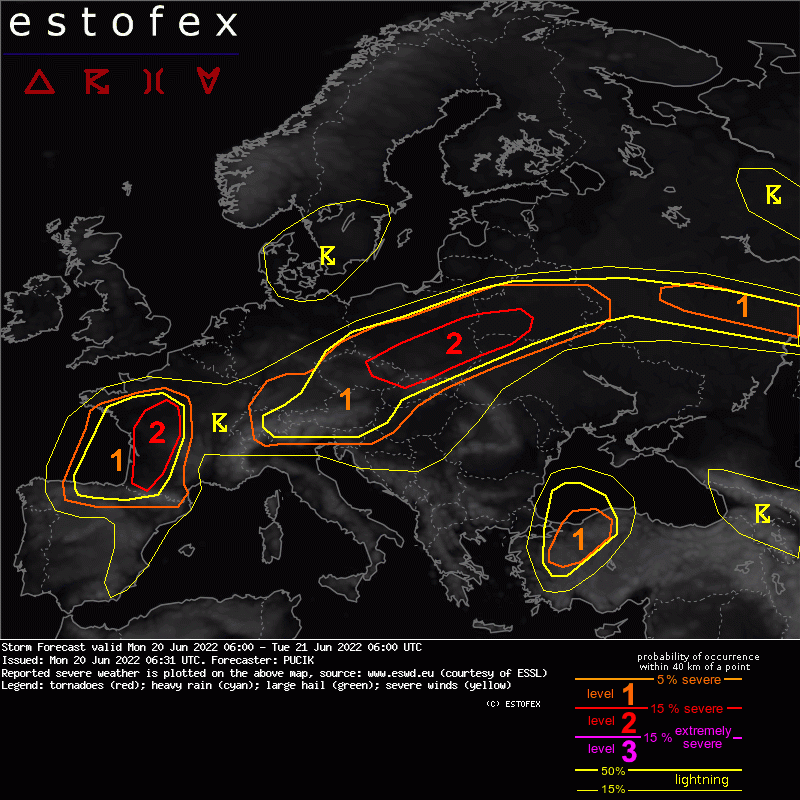 A level x was issued across W France mainly for very large hail, severe wind gusts and to the lesser extent for tornadoes.

A level 2 was issued across NE Czechia, S to E Poland, NW Ukraine and SW Belarus mainly for large hail, severe wind gusts and to the lesser extent for tornadoes.

A level 1 was issued across Russia mainly for severe wind gusts and to the lesser extent for tornadoes.

A level 1 was issued for NW Turkey mainly for large hail.

Three main features in the mid-troposphere are a deep low over NW Iberia, a trough moving from Denmark towards Poland and a low over the Black and the Ionian Sea that will merge over the Black Sea and deepen. Closer to the surface, a wavy frontal boundary is running from western France through northern part of the country, central Germany into northern Poland and further into Russia. The front will advance east as a separate low develops over it across northern Poland. Surface dewpoints up to 18 deg C are observed across the front. As of 06 UTC, isolated to scattered storms are ongoing across eastern Germany and western Czechia. One of the storms over western Czechia has become intense and may already be capable of large hail.

As of 05 UTC, abundant low-level clouds are covering the area of interest with scattered elevated showers ongoing. Surface observations show dewpoints up to 18 deg C. Towards the afternoon, a plume of steep mid-tropospheric lapse rates exceeding 7 K/km will advect over the moist airmass, resulting in MLCAPE values between 1 and 3 kJ/kg. Kinematic environment will become extremely favorable for well-organised storms given large and curved hodographs with 0-6 km bulk shear over 25 m/s, 0-3 km shear over 20 m/s and 0-3 km SRH over 300 m2/s2. Storms are forecast to develop along and to the west of the surface convergence zone or will move over the area from the higher terrain of Iberia and Pyrenees. A high-end severe weather event is possible with a mix of intense supercells and bow-echoes capable of very large hail and severe wind gusts or tornadoes. Lvl 3 was considered, but some uncertainty remains concerning the coverage of storm and their timing with respect to the boundary layer stabilizing conditions in the late evening and early night hours that may render much of the storms elevated.

... Alps through Czechia into Poland ...

Well-organized storms are forecast to develop along the cold front in the environment of 0-6 km bulk shear between 15 and 25 m/s. The storms will be capable of large to very large hail and severe wind gusts. The strongest forcing for storms and also the strongest vertical wind shear in the lower troposphere is forecast across central to eastern Poland, where surface pressure falls in response to the approaching trough from the west. Here, a tornado may also occur with more isolated supercells. There is some uncertainty concerning the coverage and the precise location of the frontal zone, which will concentrate much of the DMC activity. Lvl 2 is issued for the region of the highest expected storm coverage, but a marked severe threat will exist with any storms within a highlighted Lvl 1 area.

Despite relatively marginal CAPE, very strongly sheared environment with mean wind up to 25 m/s will support severe wind gust with any storm that develops over the area. While the lower tropospheric shear is strong, rather straight hodographs reduce the tornado risk.

Strong deep-layer shear will organize storms into a mix of multi- and supercells capable of large hail.