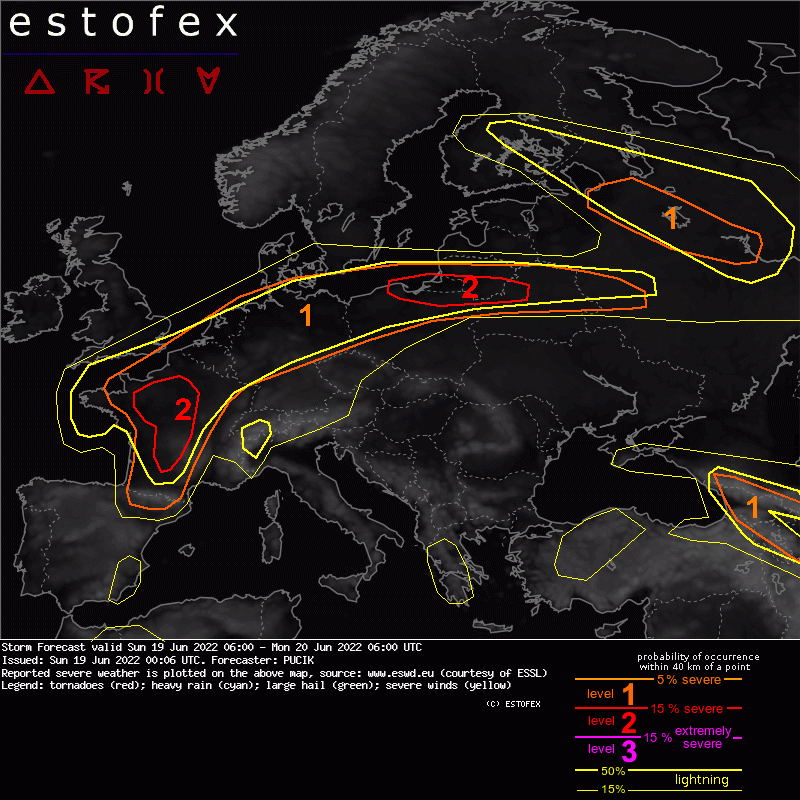 A level 2 was issued across France mainly for severe wind gusts, large to very large hail and heavy rainfall.

A level 2 was issued across N Poland, S Lithuania and NW Belarus mainly for large to very large hail, severe wind gusts and to the lesser degree for tornadoes and heavy rainfall.

A level 1 was issued across NW France, BENELUX, W and N Germany and W Poland mainly for large hail, heavy rainfall and to the lesser degree for severe wind gusts.

An unseasonably strong mid-tropospheric flow with 500 hPa windspeeds up to 45 m/s will develop between a pronounced ridge covering central Europe and two lows over Scandinavia and the Northern Sea. Strong flow also surrounds the low over the Bay of Biscay that will remain quasistationary. Two lows will also remain over the Black Sea and the Ionian Sea respectively.

An intense frontal zone is forecast to run from W France through BENELUX into N Germany and N Poland. Steep mid-level lapse rates have advected from Sahara and Iberia along with the tropical airmass south and east of the frontal zone. The frontal zone will be the main focus of thunderstorm activity during the forecast period.

Supercells and linear segments are forecast to develop in the afternoon and evening hours in the environment of strong vertical wind shear with 0-6 km bulk shear exceeding 25 and 0-3 km shear exceeding 15 m/s. Primary threats will be large to very large hail and severe wind gusts. An extremely severe wind gust is not ruled if a bow-echo manages to develop in the evening as the 0-3 km shear increases to 25 m/s. While the storms move north, the cold front will progress east, which may result in storms being undercut and becoming elevated with time. At that stage, a transition from severe wind gusts to heavy rainfall threat may occur.

Two rounds of storms (both elevated) are forecast across the region. Storms will be initiated by warm air advection on the cool side of the boundary. The first one will cover the northern half of Lvl 1 and will feature storms already in the morning hours. Storms will move very fast in strong mid-tropospheric flow. At the same time, enough shear will be present above the stable layer, enabling for organisation into supercells or linear segments. The second round of storms is expect to arrive in the night from France. Large (and perhaps even very large) hail will be the dominant threat but severe wind gusts or heavy rainfall are not completely ruled out. Severe wind gust risk will be reduced by the presence of a stable boundary layer at the time of the storms.

Well organised elevated storms, forming in the environment of high MUCAPE, will form north of the front. These storms will be capable of large to very large hail. An increase in the activity is forecast in the afternoon to evening hours as the warm air advection ramps up over the frontal zone. Some models suggest that isolated storms can form further south along the front where SBCAPE > 0 J/kg. Given 0-3 km shear over 25 m/s, considerable wind gust risk will exist with any storm that becomes surface-based. Tornado risk will also be present given the SRH up to 200 m2/s2 in the 0-1 km layer, but will be limited by high LCLs south of the front and stable low-levels along and north of the front.

Scattered storms will form along the cold front and may be capable of severe wind gusts given strong mean flow and 0-3 km shear exceeding 15 m/s.

While the storms will remain rather low-topped, strong vertical wind shear may allow for a couple of supercells capable of large hail.