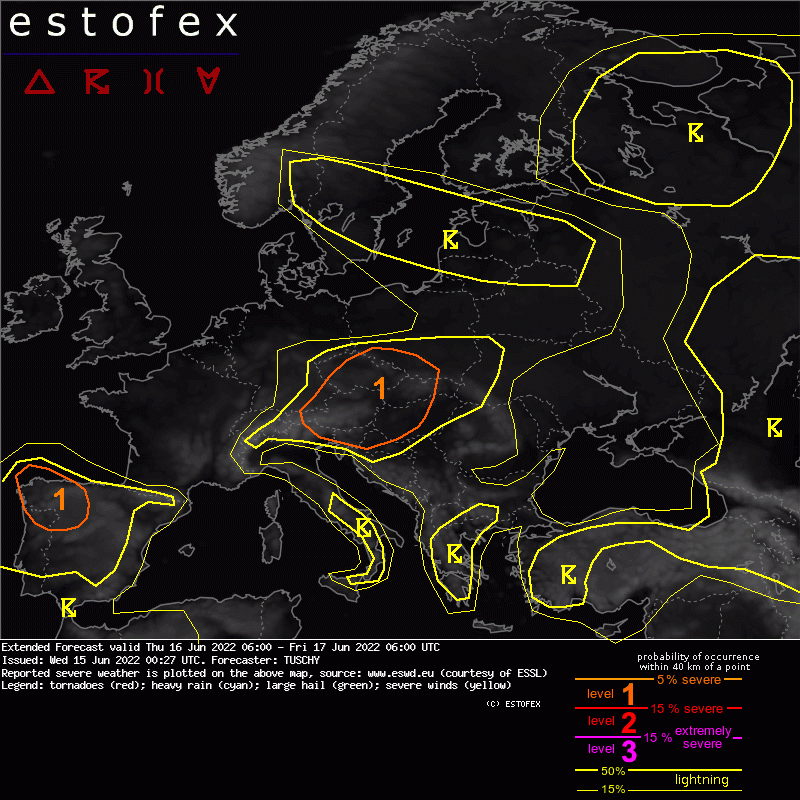 A level 1 was issued for parts of CNTRL Europe mainly for large hail and severe wind gusts. An isolated tornado event is possible.

A level 1 was issued for parts of Portugal and NW Spain mainly for large hail and severe wind gusts.

Zonal flow over Europe weakens and transforms more into an "omega block-ish" pattern with an impressive ridge centered over W/SW Europe (500 hPa height percentils in the 99% range with similar to record precentil readings for the 850 hPa temperatur over far SW France). This ridge gets framed by a pronounced and gradually northward lifting upper low just off the W coast of Portugal and another broad and ill defined upper trough over SE Europe. Elsewhere in N/NE Europe rather usual conditions are forecast with respect to temperature and thickness (despite some negative anomalies over Finland).

Weak waves circle the ridge with the strongest one crossing NE Germany until noon before moving into Poland thereafter.

Despite a wavy synoptic-scale front over W Russia, no clear frontal signal is seen in NPW guidance over W Europe in the ongoing WAA pattern. Yesterday's cold front over Portugal transforms into a wavy E-W oscillating boundary.

Overall the models have a good handling on the anticipated pattern. The main focus will be the low-amplitude wave, which crosses CNTRL Europe and is forecast reasonably well with respect to speed and placement. Some issues exist regarding its curvature with GFS increasing this vorticity source, whereas ICON trending less amplified. IFS is between both models but trends more to the aggressive GFS solution- We favored GFS/IFS for now.

... E Germany, parts of Poland, Czechia into parts of Austria and Slovenia ...

As described in the last SWODY-1, we expect a gradual increase of morning convection over S/E-CNTRL Germany due to modest WAA along the tip of this wave. This activity is non-severe and isolated to scattered in coverage.

Beyond noon, this wave interacts with a plume of higher BL moisture and steeper mid-level lapse rates over SE Germany, Czechia into S Poland and Austria. MUCAPE increases into the .5-1.5 kJ/kg range with ICON showing more aggressive values. The wave gets accompanied by a 50kt mid-level speed maximum, which increases DLS in the 15-20 m/s range next to 0-3 km shear in the 10-15 m/s range. Forecast hodographs offer a rather straight appereance but given the degree of shear, multicells/a few supercells are well possible. With evolving vertical pressure perturbations during maturing thunderstorms, deviant motions could increase helical inflow into a few cell to such a degree that even an isolated long tracked supercell can't be excluded.
LCLs aoa 1000 m and mentioned CAPE/shear space should support large hail/severe wind gusts as the main hazard. We do not yet want to exclude an isolated tornado threat despite marginal BL conditions. Enhanced BL moisture from extreme SE Germany into E/NE Austria may be adequate for a tornado event as maturing storms enter from the NW.

A broad level 1 was issued to highlight the general risk. A regional upgrade may be justified later on in case of a corridor with augmented probabilities for supercell development and an attendant higher severe threat.

Focus for CI remains the stalling boundary and the orography within the highlighted area. CAPE-shear space improves from SE to NW with impressive readings over far NW Spain/extreme N Portugal like 30 m/s DLS, 25 m/s 0-3 km shear and 0-3 km SRH in the 200-300 m^2/s^2 range. Models diverge regarding the placement of the highest CAPE with GFS/IFS favoring extreme NW Spain (e.g.Galicia), where BL moisture increase is substantial (likewise MUCAPE aoa 1500-2500 J/kg). The placement of the synoptic front dictates this regional risk including potential shallow surface lows, which evolve along this boundary. If storms indeed enter the aforementioned CAPE shear space, very large hail and severe wind gusts would be possible. With ongoing uncertainties only a broad level 1 area was issued but an upgrade to a level 2 for far NW Spain is possible.