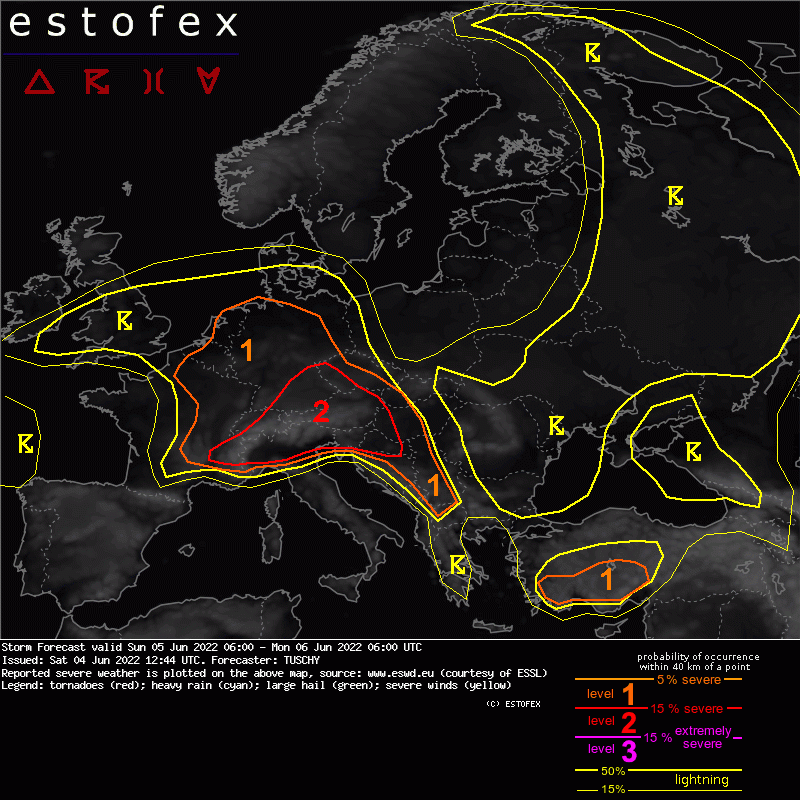 A level 2 was issued across parts of Switzerland, S/SE Germany, Austria, N Italy to Croatia mainly for severe/damaging wind gusts and large to very large hail.

A level 1 surrounds the level 2 for similar hazards but with less coverage. The level 1s over E France/Benelux and N Germany were issued mainly for heavy rain and a low-end tornado risk (Belgium/the Netherlands).

A level 1 was issued for W-Turkey mainly for heavy rain.

Ongoing blocking ridge over the CNTRL Mediterranean weakens during the day with its augmented positive height anomalies pushing S towards N-Africa. Along its northern periphery, a mobile ridge moves E over CNTRL Europe with its axis crossing Poland during the night.
A mid/upper cyclonic vortex jut W of the English Channel opens up while moving E with a resulting more zonally aligned flow regime affecting the NE Atlantic towards NW France.

At the surface, a frontal boundary runs from N France/Benelux towards Hungary and further E towards Romania. A diffuse/elongated LL depression evolves over Benelux and modulates this boundary into a gradually lifting warm front over SE Germany into Hungary and a structuring cold front over France.

ICON converged towards GFS/IFS with respect to placement and intensity of the passing short wave. The same for the evolving depression over Benelux/NW Germany with a more modest intensification rate even in most deterministic runs. IFS-ENS members are more tightly clustered compared to yesterday and show a track towards the Netherlands (with a few stronger members more deflected towards the NW). Overall there is good agreement in the geopotential height and MSLP fields.

... Switzerland into S/SE Germany and Austria ...

Main uncertainties with today's setup remain how (probably residual nocturnal) MCS activity behaves over S Germany as activity rolls E along a structuring warm front during the morning hours. Wouldn't be surprised to see this convection entering N Austria before noon or passing on a more northerly track than some models indicate. However it makes sense to build this activity into the CAPE-rich airmass over S Germany and hence we converged to the solution to expect a passing and slowly weakening morning/forenoon MCS passage through parts of the level 2.

Behind that line, temporal clearing should assist in some diabatic heating, which should be enough for CI and worked-over mid-levels (weaker mid-level lapse rates) by latent heat release of the mentioned MCS activity should recover rapidly with EML fanning NE from the Alpine rim.

ICON had a good BL moisture handling in the past and hence we still can't deny MLCAPE forecasts of 3 kJ/kg over far SE Bavaria into N Austria but even 1-2 kJ/kg MLCAPE (GFS/IFS) would be enough for long-lived updrafts.
DLS resides in the 15-20 m/s range and area averaged forecast soundings over far SE Germany point to 800-1000 J/kg DCAPE and in excess of 8K/km 0-3km lapse rates.

Betimes, rapid upscale growth is anticipated over S Germany, pushed E by strong pressure rise, which emanates E/NE from Switzerland. Models show a developing cold pool with more than 10K cross thermal gradient and given a well mixed LL air mass, swaths of severe/damaging wind gusts with large hail push E towards N Austria and SW Czechia before entering a more stable air mass (especially over Czechia). We broadened up the level 2 over E Austria as there are no real indications for a mature MCS to not race that far E before weakening.

Thought about adding a level 3 area to SE Bavaria into Austria, but lingering uncertainties with morning convection and weak 0-3km shear keep confidence just below this threshold.

With ICON now also pointing to a healthy short wave passage and active CI along the W-Alps, not much is seen in the way to prevent this activity to build into the very unstable air mass over N Italy. There, 2-3 kJ/kg weakly capped air mass with 10-15 m/s 0-3 km shear and well mixed lower tropospheric layers pave the way for a long-lived severe MCS event with damaging wind gusts and large/very large hail. Mesoscale/storm interaction dictates if an isolated tornado event is still possible despite the otherwise not so favorable LL stratification.
Many models want to decay this MCS over Slovenia during the night, but we think again that any mature MCS keeps going while rounding the ridge axis and hence we broadened all level areas well to the E/SE.

The level 1 was expanded N to cover the risk of slow moving thunderstorms with heavy rain and isolated hail as DLS is forecast in the 10-15 m/s range. Over Belgium/the Netherlands an isolated tornado event is possible along the periphery of the N-ward moving LL depression.

Once again another round of slow moving convection is forecast with a heavy rainfall threat (local flooding issues).