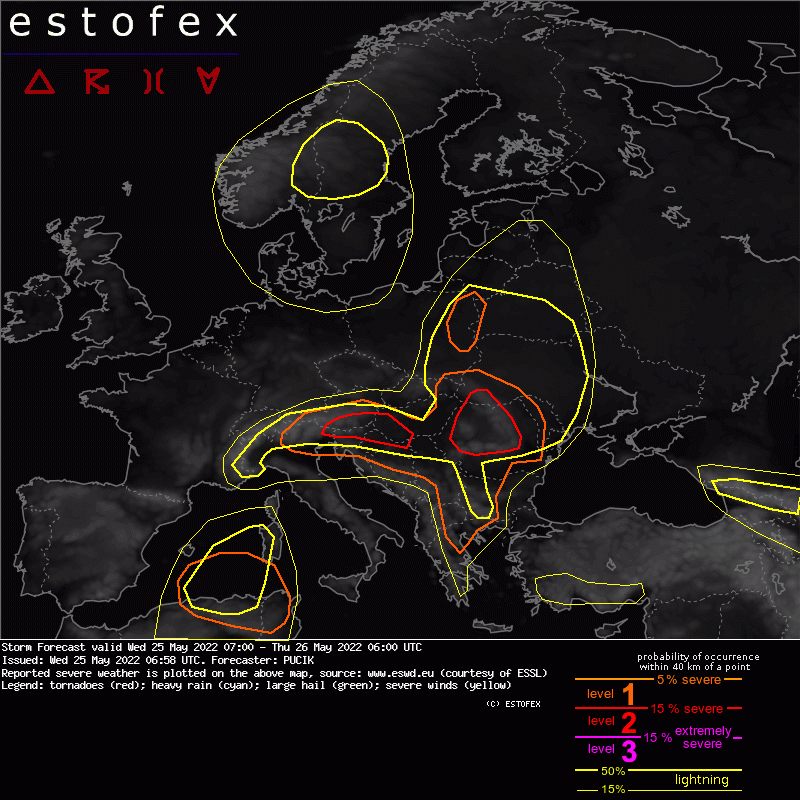 A level 2 was issued across Romania mainly for large to very large hail and damaging wind gusts.

A level 1 was issued across Algeria and Tunisia mainly for excessive rainfall, large hail and severe wind gusts.

A level 1 was issued across E Poland mainly for heavy rainfall.

A level 1 was issued across Bosnia, Serbia, Northern Macedonia and Bulgaria mainly for large hail and severe wind gusts.

A complex forecast scenario is evolving across Europe with numerous synoptic-scale features that influence the pattern. Strengthening of the zonal flow across the Atlantic pushes the trough eastward across northern and central Europe. Towards the south, a deep low at the mid to upper troposphere will stagnate south of the Balearic islands. Towards the east, another deep low stagnates over Russia with northwesterly flow extending all the way to Turkey. Near-surface, a wavy frontal boundary stretches from Algeria through the southern Alps into Hungary, Slovakia, and Poland. As the Atlantic trough ejects east, the northern part of the boundary will also start moving east, accelerating towards the latter part of the forecast period. The highest risk of severe weather is forecast to east and southeast of the frontal boundary, where moist air overlaps with steeper mid-tropospheric lapse rates.

Models agree on high coverage of storms in the center of the low in rather moist conditions and with weak storm motions, these may result in locally heavy rainfall. More questionable is development ahead of the frontal boundary, where very steep lapse rates combine with strong vertical wind shear, high LCLs, and of course, also high CIN. Convective initiation is highly uncertain, but any surface-based storm sustained in such an environment will be capable of damaging gusts and large to very large hail. ECMWF was more aggressive with pre-frontal development than ICON and GFS and uncertainty remains quite high. Nevertheless, both regimes are now given Lvl 1.

Compared to yesterday, which already brought a swath of severe weather to the area, even stronger vertical wind shear is forecast today, exceeding 20 m/s in the 0-6 km layer. As of 06 UTC, surface observations show dewpoints up to 16 deg C, southeasterly surface winds, and gradual clearing of low-level clouds over Austria. Orography and a cold front will serve as initiation mechanisms. Storms will quickly organize into supercells and linear segments with threats of large to very large hail, excessive rainfall, and also severe wind gusts. Some reduction in the storm intensity can happen as the storms are undercut by the southward moving cold front, while the majority of storms move east - southeast.

An airmass recovery is forecast over Romania towards the late afternoon hours with an increase in the surface dewpoints up to 16 deg C. The cold front will first initiate storms over the mountainous regions of central and northern Slovakia. These storms will propagate southeast and will increase in intensity as they encounter higher CAPE values over Romania and eastern Hungary. Strong vertical wind shear will sustain a high degree of storm organisation into supercells and linear segments. Large hail will be the initial threat, but quickly give way to severe wind gusts as storms congeal into a large system. With 0-3 km bulk shear between 15 and 20 m/s, a bow-echo may develop across Romania with long swaths of severe wind gusts.

The environment, characterized by moderate vertical wind shear, abundant CAPE, and high LCLs will be conducive to storms capable of large hail and severe wind gusts. That said, these areas will not be directly impacted by the frontal boundary and the initiation is questionable. The highest chances are anticipated over the mountainous regions of Bulgaria.

Slow-moving storms are forecast along the frontal boundary. Excessive rainfall is likely given the slow-moving storms form in the environment of abundant CAPE in the warm part of the cloud and low LCLs.