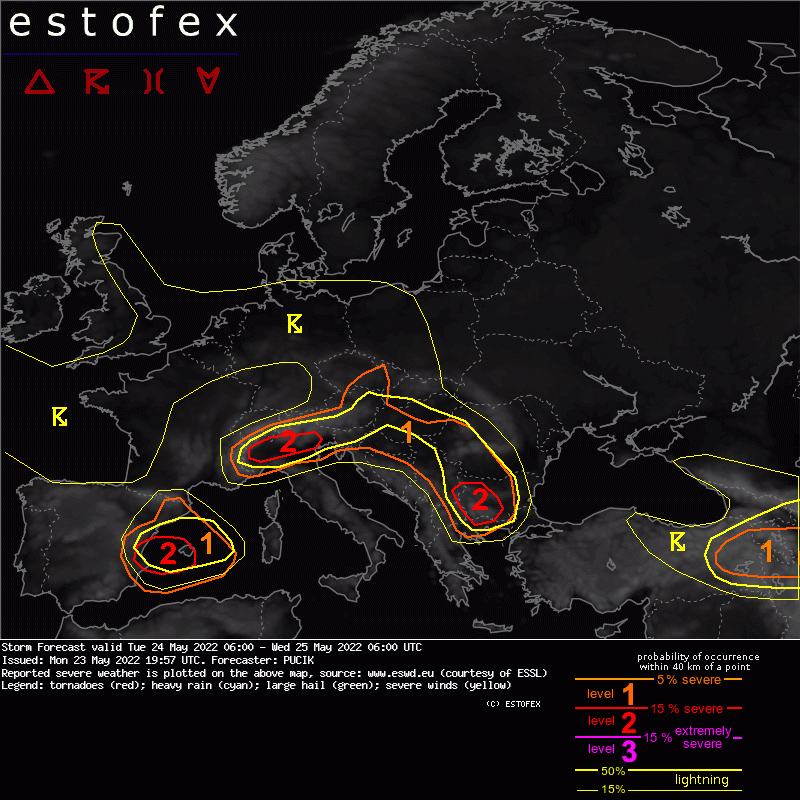 A level 2 was issued across E Spain into the Balearic Sea mainly for large to very large hail and severe wind gusts.

A level 1 was issued across NE Spain mainly for excessive rainfall.

A level 2 was issued across N Italy mainly for large to very large hail, severe wind gusts and heavy rainfall.

A level 1 was issued across Slovenia and S Austria mainly for large hail and heavy rainfall.

A level 1 was issued across N Austria and Czechia mainly for heavy rainfall.

A level 1 was issued from S Hungary towards N Greece mainly for large hail and severe wind gusts.

A level 1 was issued across Bulgaria mainly for large to very large hail and severe wind gusts.

A level 1 was issued for parts of the Middle-East mainly for severe wind gusts.

An amplified pattern is forecast across Europe with a large ridge extending from the central Mediterranean into the Baltic Sea. The ridge is bounded by deep troughs, one over the Atlantic and another one over Russia and N Turkey. Severe thunderstorm risk will be confined mainly to the belt from E Spain into N Italy and Bulgaria, on the outskirts of very warm airmass with a plume of steep mid-tropospheric lapse rates that have been advected from Sahara. A wavy frontal boundary will run from E Iberia through the Alps into Czechia and W Poland. A warm front will run across Hungary, W Romania, and E Bulgaria. Â

A pronounced overlap of CAPE and strong deep-layer shear is forecast across the area, yielding favorable conditions for supercells and linear segments capable of large to very large hail and severe wind gusts. The storm coverage is forecast to rapidly increase towards the evening hours as the upper-tropospheric trough approaches. A mesoscale lift will be provided at first by orography and then by the cold front that will spread fast across the Balearic Sea. Given still rather cool sea surface temperature, it is possible that as the storms move over the sea, these will be elevated, making the severe wind gust threat more questionable. Â

An overlap of seasonably moist airmass with dewpoints between 14 and 18 deg C with modest mid-tropospheric lapse rates will yield MLCAPE values between 500 and 2000 J/kg. A weak warm air advection regime will provide the lift on the synoptic scale while storms will be initiated mostly by the orography. The first storms are expected to form over NW Italy and spread eastwards towards Lago di Garda. Given strong vertical wind shear, storms will be well-organized. At first, the intensity of storms may be limited somewhat by weak winds below 3 km with the consequence of weaker inflow. Slight strengthening in the low-level shear is forecast in the afternoon hours. High res models initiate more isolated initiation with the primary convective mode being supercells, but some upscale growth will be possible towards the late afternoon and evening hours as storms spread E. Large to very large hail and severe wind gusts will be primary threats. The approach of the trough from the W will enhance the synoptic-scale lift and also storm coverage in the late evening to night hours. Storms may last well into the morning hours with the highest threat shifting towards the heavy rain. Weaker shear over Slovenia and Austria will lead to smaller severe weather risk but still warranting a Lvl 1.

Elevated instability will develop along the wavy frontal boundary, allowing for some storms to develop. These will be rather slow-moving and given low LCLs and moist profiles may be capable of heavy rainfall.

A warm front will stretch across the area with a plume of steep lapse rates yielding MLCAPE values over 1000 J/kg. W of the boundary a pronounced overlap of MLCAPE and 0-6 km bulk shear exceeding 15 m/s is forecast. However, convective initiation is questionable in the warm airmass. Higher chances of initiation are forecast on the cool side of the boundary, where some elevated storms may still produce large hail in the moderate shear. Surface-based storms capable of large to very large hail and severe wind gusts are forecast especially across Bulgaria, where orography will help the initiation even outside of the boundary and storms will rapidly organize in 15+ m/s of 0-3 km bulk shear.

Strong shear combined with steep low-level lapse rates will allow for an enhanced threat of severe wind gusts despite rather marginal buoyancy.