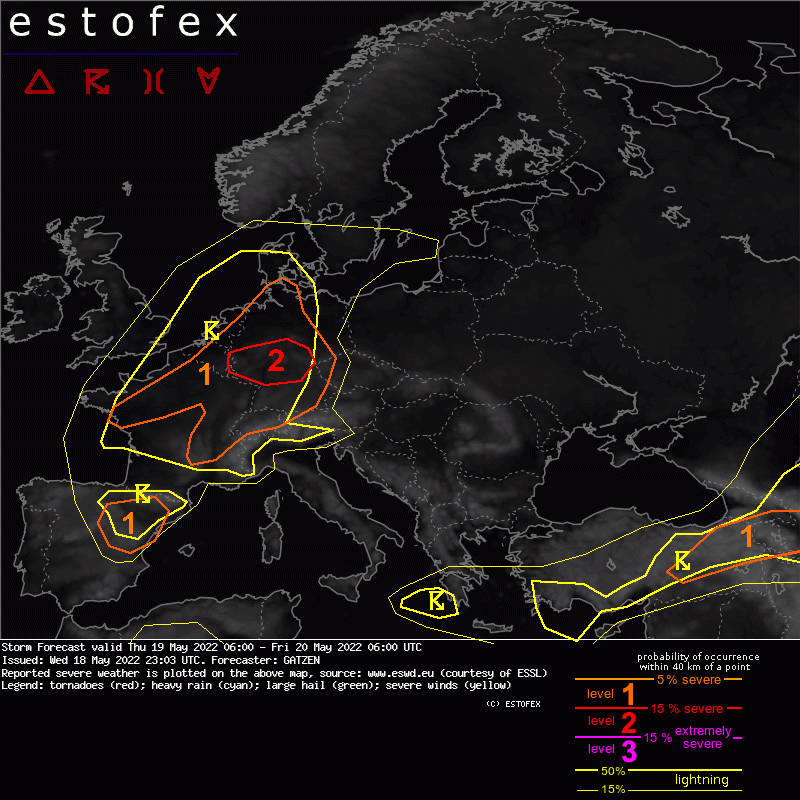 A level 2 was issued across central Germany mainly for severe wind gusts.

A level 1 a was issued across northern, central, and eastern France, western and central Germany, Benelux countries and southern Denmark, northern Alps mainly for severe wind gusts and large hail and locally for heavy rain.

A level 1 was issued across eastern Turkey for severe wind gusts.

Ahead of an Atlantic long-wave trough, a plume of unseasonably warm air spreads into France. A frontal boundary extends along the shores of the North Sea. Embedded in the south-westerly flow, a mid-level vort-max travels into Germany, supporting a frontal wave that moves east. It will be the focus of severe convective activity, but further storms are also expected within the warm air. South-eastern Europe is affected by a frontal boundary at the edge of an east-European trough.

Along the frontal boundary close to the North Sea, thunderstorms will go on in the morning hours. Althoug these storms are mostly elevated, some severe wind gusts are not ruled out due to strong vertical wind shear.

Later in the day, increasing MLCAPE will support surface-based storms, that will be well-organized given strong vertical wind shear especially in the lowest 3 km (about 10 m/s). Large hail, severe wind gusts, and a a few tornadoes are not ruled out. Coverage of storms will increase near the center of the developing frontal wave over Belgium. These storms are forecast to form a squall line that moves into Germany. Severe wind gusts will become quite likely along the bowing segments of the squall line, with the highest potential indicated by a low-end level 2.

Storms are forecast to weaken after sunset while moving east until the morning.

Another frontal wave is expected to develop late in the period across north-western France, where new storms will develop in the morning, capable of producing some severe wind gusts.

Within the warm air, storms are expected over the mountains. Deeply-mixed air masses will support a severe wind gust threat. Additionally, CAPE shear overlap points out to the potential of some large hail threat across France.