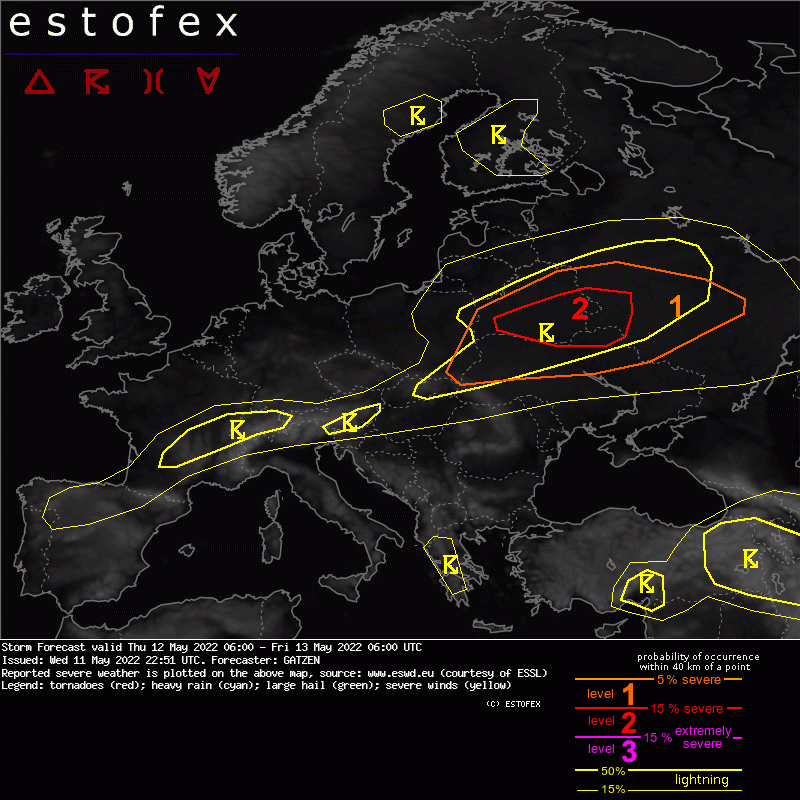 A level 1 was issued across western Russia and northern Belarus for severe wind gusts and tornadoes.

A level 1 was issued across northern Ukraine and western Russia for severe wind gusts.

An intense short-wave trough embedded in a strong westerly jet rapidly progresses across central Europe on Thursday. A cold front extends from the Channel towards Germany, northern Poland to the Baltic States and crosses Belarus and Ukraine towards western Russia. In the western portions, the cold front will become stationary across the Laps and southern France.

Ahead of the cold front, a high-shear, low-CAPE environment is expected across eastern Europe with a potential for severe wind gust producing storms. Farther south, ridging affects most of the Mediterranean except for the east where a mid-level trough is expected.

Current soundings indicate weak CAPE ahead of the progressing cold front across Germany, and convective storms have formed that move into Poland. This instability is the result of a plume of steeper lapse rates that is expected to advect north-east in the next hours, reaching Ukraine and southern Belarus. At the same time, some higher moisture is forecast ahead of the cold front. Chances of storms will weaken overnight, but diurnal heating will result in increasing instability from eastern Poland towards Belarus and Ukraine.

In the afternoon, a convective line is forecast to move south-east, where weaker low-level moisture and also weaker lapse rates are expected. This will be associated with weakening convection although strong QG forcing will spread east. However, strong to severe wind gusts are forecast to go on for quite a while across western Russia until CAPE becomes too low to support convective storms.

Ahead of the cold front, some frontal lift is expected to affect a rather moist and unstable air mass. Thunderstorms are forecast over hilly terrain and ahead of the cold front that move eastward. Vertical wind shear is weak and also CAPE is limited, so that severe storms are not likely. However, some large hail and severe wind reports are not ruled out, especially towards Slovakia. In the western parts, slow-moving storms can produce some local flooding.