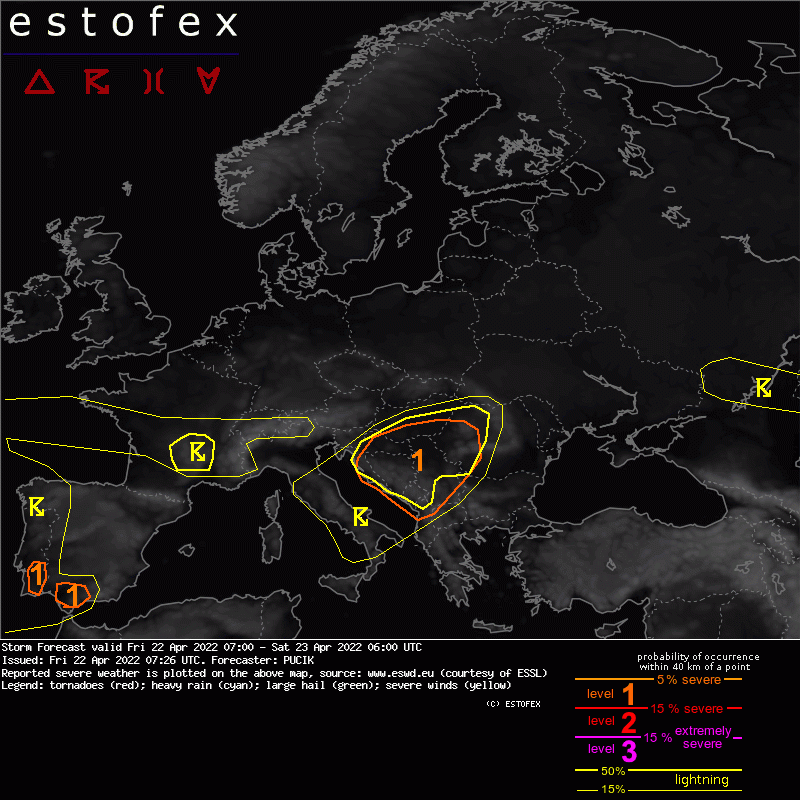 A level 1 was issued across SW Spain and S Portugal mainly for tornadoes and severe wind gusts.

A level 1 was issued for the E Adriatic coastline mainly for excessive rainfall and to the lesser degree for large hail.

A level 1 was issued for Bosnia and Herzegovina, Montenegro, Serbia, S Hungary and W Romania mainly for severe wind gusts and large hail.

Active weather is ongoing across Europe with numerous separate lows in the mid to upper troposphere. Concerning the severe weather, the two most important are a deep low over the Atlantic with the exit region of the associated jet streak over SW Iberia. The second one is a low located over central Italy as of 06 UTC and moving NE towards the Balkans. Closer to the surface, a WAA regime is ongoing over Serbia and S Hungary in the morning hours while a cold front will approach the area in the late afternoon to evening hours. The warm front is forecast to lift towards S Slovakia and S Ukraine. Strong lower-tropospheric flow is forecast across SW Iberia with 850 hPa wind speedsÂ exceeding 20 m/s.

Numerous rounds of low-topped storms are forecast during the day in the exit region of the cyclonically curved jet streak. The storms will move very fast in a strong mean flow exceeding 20 m/s. As the 850 hPa flow locally approaches 25 m/s, even weaker downdrafts may be capable of marginally severe wind gusts. This threat will be limited by the lack of surface heating and low LCLS. Low LCLs will enhance the tornado threat that will exist given the 0-1 km bulk shear around or above 10 m/s. The tornado threat will be the highest over the SW Spain, where curved hodographs are simulated by some models with 0-1 km SRH above 200 m2/s2. Â

Surface heating is currently ongoing over much of the area behind a thick stratiform cloud shield that is lifting NE. The heating may be limited to some degree due to the presence of the Saharan dust. Observations show dewpoints between 8 and 11 deg. C, which corresponds to the values also found in the NWP models. Current development raises confidence that at least marginal buoyancy will build up over the region with MLCAPE values mostly up to 500 J/kg.

Synoptic-scale lift is forecast to overspread the region with the approach of the mid to upper-tropospheric low from Italy. In response, a surface low will develop over N Bosnia/E Croatia and shift NEwards. Cyclogenesis will increase the lower-tropospheric wind field and also strengthen the lower-tropospheric vertical wind shear. The highest confidence for storms exists along with the WAA maximum that shifts from Bosnia through N half of Serbia towards NW Romania and S Hungary. Widespread storms are expected here. More isolated storms are forecast further south.

In the belt of N Bosnia - N Serbia - S Hungary - NW Romania, much of the shear will be combined to the bottom 3 km with bulk shear values exceeding 15 m/s in that layer. Combined with strong forcing, there is a high likelihood that a squall line forms with the primary threat of severe wind gusts. Storms will become more elevated as they move N across Hungary, reducing the threat to some degree. Further S, more elongated hodographs are simulated over S Serbia and SW Romania with 0-6 km bulk shear values around 25 m/s favoring supercells. With a more isolated convective mode, large hail should be the dominant threat. Very large hail threat will depend on how much CAPE can develop over the region and is uncertain at the moment.Â