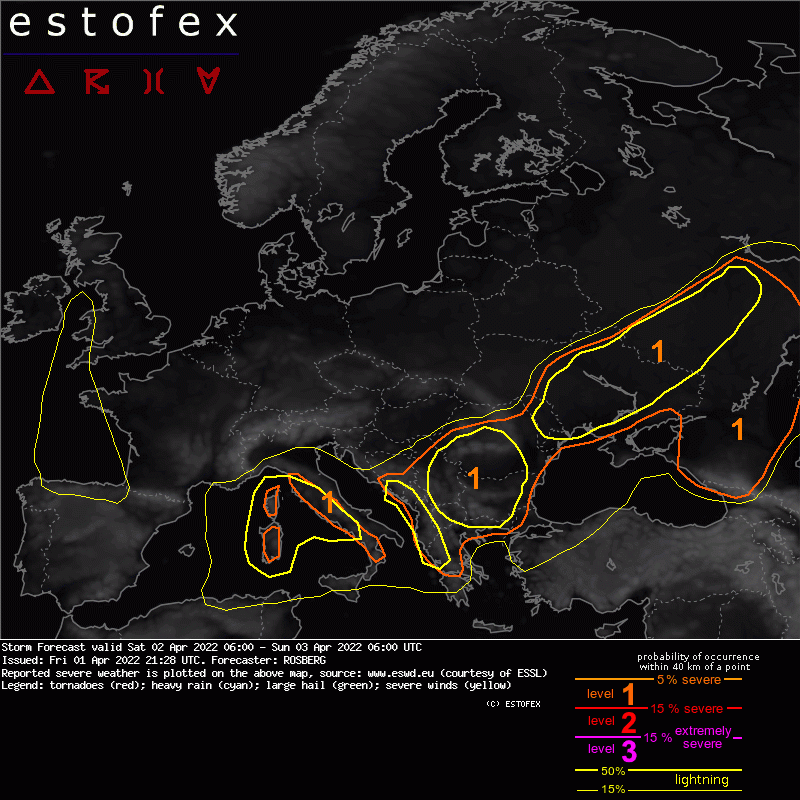 A level 1 was issued for Ukraine and western/southwestern Russia for severe wind gusts and large hail.

A level 1 was issued for eastern Balkans and Romania for severe wind gusts.

An extensive and almost stationary longwave trough is covering large parts of Europe, and is flanked by an upper level anticyclone that is located over northeastern Atlantic west of the British Isles. The longwave trough is associated with a strong mid-level jet that is located around the base of the trough from the Iberian Peninsula, across the Mediterrenean and further towards Turkey, the Black Sea region and western Russia.
Several shortwave troughs are expected to propagate cyclonically around the base of the longwave trough. One shortwave will move southward from the British Isles to the Bay of Biscay, while another will move from the Ligurian Sea towards the Balkans. A third shortwave will eject from the Black Sea region towards northeast to Ukraine and western Russia.

At the surface a low-pressure system is located over the Ligurian Sea and is moving slowly eastward. Another surface low over northern Ukraine is moving east- and northeastward into western Russia.
The lows form a sharp frontal boundary between a very cold polar airmass that is located over large parts of the northwestern half of Europe from warm and quite moist air that is moving up over the southeastern Mediterranean, Turkey, the Black Sea region, Ukraine and western Russia from west and southwest. This frontal boundary will be the main focus for the development of deep convection on the warm side. On the cold side some quite significant amounts of snow and sleet might occur over parts of central and eastern Europe.

Within the cold airmass across western Europe a surface trough is expected to move southward from the British Isles towards western France to the Bay of Biscay. This surface trough will trigger some shower activity across these areas. However, due to weak mid-level lapse rates and low EL-heights only a few lightning strikes are possible.

Ukraine and western and southwestern Russia

Saturday afternoon, solar heating combined with dewpoints up to 7-10 degrees will yield locally up to 300-800 J/kg MLCAPE across southeastern Ukraine and western Russia. Surface based storms will likely form along the cold front and might organize into line segments or perhaps a full squall line due to some 10-15 m/s DLS and locally up to 10-15 m/s 0-3km bulk shear. The main threat from these storms will be strong to severe wind gusts, but hail and heavy rain will be possible as well in stronger cells.

A few isolated showers or storms might perhaps also form ahead of the cold front over eastern Ukraine and western/southwestern Russia in the warm sector during peak heating. Models simulate an area of surface convergence just north of the Caucasus-region that could trigger some deep convection.
DLS will be very strong, in excess of 20 m/s, and across western Russia some impressive 0-1km storm relative helicity values of 200-300 m2/s2 can be found with curved hodographs. However, some dry low- and midlevel air will in general suppress any widespread convective activity over these areas. If isolated storms will manage to form then they could evolve into supercells with risk of large hail and severe wind gusts. Despite the favorable shear conditions over western Russia for tornadoes, the relatively dry low-level air combined with some low-level inversions in several places will prevent tornado formation or at least make the tornado potantial low. That being said, the dry boundary layer with high CB-bases could on the other hand contribute to the severe wind gust threat by precipitation evaporation.

Later in the day and during the night to Sunday the surface low and cold front are moving east- and northeastward into western Russia, and storms will gradually become elevated and weaken.


A cold front associated with the surface low over the Ligurian Sea is located across the western Balkans down to western Greece. Numerous showers and a couple of storms will be occurring along the frontal zone, and cells will also be triggered by the westerly flow being forced upwards over the hilly terrain near the coasts along western Balkans and western Greece. These training cells will be contributing to a flash flood threat over these areas.
Deep layer shear in the order of 10-15 m/s will occur over the Balkan coast where showers and storms could organize into lines and/or clusters with risk of strong wind gusts and hail. However, due to quite weak mid-level lapse rates and quite low EL-heights with only a few hundreds of MLCAPE, no widespread severe weather is expected.
DLS will increase to an impressive 25-35 m/s across Albania and western Greece. Also, here the EL-heights will be quite low, but stronger cells that will be deep enough could evolve into low-topped supercells with risk of hail and severe wind gusts.

Showers and perhaps a few storms are expected to occur and form along a wavy frontal zone over Romania and northern Balkans. Also, some showers and storms are expected to form in the afternoon in the warm sector across North Macedonia, northern Greece and Bulgaria by solar heating and over mountainous terrain.
Instability will be somewhat limited with roughly 100-500 J/Kg MLCAPE with quite weak mid-level lapse rates. Thus, no deep and vigorous convection is expected. Convection could also struggle to develop in some areas due to pockets of dry low- and mid-level air.

DLS is expected to be 10-15 m/s, meaning storms might organize into multicells with risk of strong to severe wind gusts and hail. Highest risk of strong to severe wind gusts will be in areas where the low-level air will be dry and evaporational cooling will enhance downdraft potential.
0-6 km bulkshear will increase to 20-30 m/s across northern Greece, Bulgaria and North Macedonia. Thus, convection that manage to form in these areas could evolve into low topped supercells with a threat of severe wind gusts and large hail. Hodographs across the region will be mostly straight favoring splitting storms which is unfavorable for tornadoes.

The convection will in general weaken and taper off after sunset, but a few elevated showers and perhaps a storm could still linger during the night.

Some higher values of storm relative helicity with some slightly curved hodographs can be found Saturday evening and night to Sunday across western Turkey. In these areas a weak cold front is expected cross the region from west with some elevated low topped convection. Despite the slightly curved hodographs, the tornado potential will be very low due to the elevated nature of the convection.


Widespread convective activity will be ongoing across the western and central Mediterranean Sea associated with the surface low across the Ligurian Sea. The convection will form as the cold air mass moves over the relatively warm waters of the Mediterranean in connection with convergence along small surface troughs and in vicinity of an occluded front around the surface low. The low El-heights within the cold air and minimal CAPE due to weak lapse rates will prevent deep and vigorous convection, and thus only a couple of thunderstorms will be possible. However, the strong westerly flow south of the surface low will contribute with training convection with convective cells repeatedly affecting the western parts of Italy, Corsica and Sardinia with a flash flood threat.

The strong westerly flow south of the low is a result of a tight pressure gradient, and there is a risk of strong non-convective wind gusts, especially over Sardinia.

Deep layer shear will be mostly light, under 10 m/s, favoring slow moving convection. Much stronger DLS in excess of 20 m/s will be found across southern Sardinia, Tyrrhenian Sea and southern Italy in connection with the mid-level jet. Here stronger cells that are deep enough could evolve into low topped supercells with risk of severe wind gusts and hail. The lapse rates will be weaker and EL-heights lower across Sicily, and despite strong shear convection will be too shallow to take advantage of the shear and barely generate lightning.

Near the surface low where the surface winds will be weak, a waterspout or two is possible where surface convergence will occur and where enough low-level CAPE will be present.