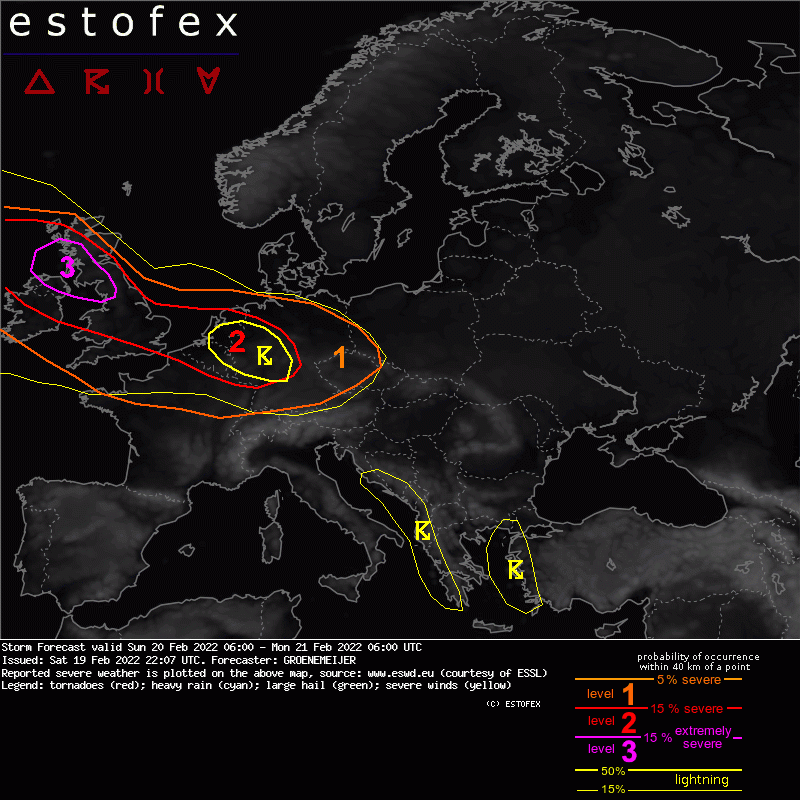 A level 3 was issued across western and south-western Scotland, northeastern England, and northern parts of the island of Ireland mainly for severe wind gusts.

A level 2 was issued across large parts of England, Wales, the island of Ireland, the Benelux, and across far northern France and western parts of Germany for severe wind gusts and to a lesser extent for tornadoes.

A strong WNW-ESE oriented jet streak with 150-200 kt wind speeds at 300 mb rapidly translates ESE-ward with its right exit quadrant about 600 km west of NW Ireland at 12 UTC, over the Irish Sea at 18 UTC, the southern North Sea at 00 UTC, and north-central France at 06 UTC. Strong quasi-geostrophic forcing for upward motion and resulting destabilization is expected to move in concert with it, which will force linear convection along and behind a cold front that will move southeastward from Western Scotland and Ireland southeastward across the British Isles and reach the Alps on Monday morning.

The front should become defined as a rainband as low-level convergence increases during the morning and the afternoon when it tracks southeastward across Wales and England. The strong background wind field of 30-35 m/s at 850 mb suggests that severe gusts should gradually become an increasing risk. Some very severe gusts of over 32 m/s may occur especially while crossing the North Sea and affecting the Benelux countries.

Convection allowing models suggest that some mesovortices may develop along the line in particular when it moves inland across the Benelux, northern France and western Germany where it encounters strongly helical low-level flow (>400 m2/s2 storm-relative helicity in the 0-1 km layer) This would suggest that an enhanced risk of very severe gusts > 32 to extend inland, as well as a risk of tornadoes.
Limiting factors to their development, however, are the moderate convergence and wind shift along the line, which in the ICON-D2 model yield, fortunately, values of vertical vorticity of about half to two-thirds of those that were predicted for the line that produced multiple tornadoes in Poland early on Friday. Some risk for tornadoes will nevertheless remain. The risk for severe weather overall is expected to slowly diminish as the forcing of the upper-level jet/vorticity maximum slowly weakens toward the morning.

The upper-level vorticity maximum on the polar side of the leading part of the jet streak is followed by a second one, which can better be described as a low-to mid-level vorticity maximum with a deep, but slowly filling surface low. This system causes destabilization that will invigorate a second area of convection approaching Scotland and Ireland between 21 and 00 UTC. Because it is embedded in a particularly strong flow and linear organisation is likely as it moves southward after midnight UTC, a level 3 was issued for the area that will be affected. Very severe gusts exceeding 32 m/s will be fairly widespread with the convection, also across areas somewhat further inland. That being said, the convection is not the only culprit: especially the coastal regions of western Scotland and in the north of Ireland will also experience such severe gusts outside of convective storms as a result of the very tight pressure gradient.