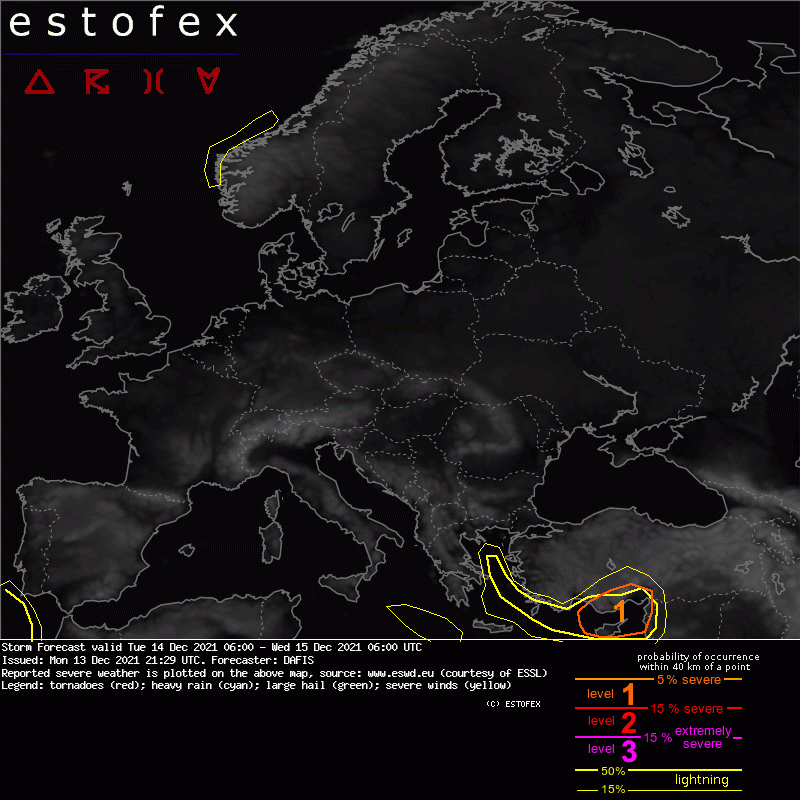 A level 1 was issued for parts of S Turkey and Cyprus for large hail, severe convective wind gusts and tornadoes.

The very active weather pattern over Europe continues with several shortwave troughs roaming around over northern parts, a developing ridge over western Mediterranean spreads north-northwest and a cut-off low destabilises eastern Mediterranean. Some of the best chances for DMC events until the end of this outlook exist southwest from Iberia but this area is slightly out of our domain. Another hot-spot will be eastern Mediterranean where all ingredients for storms will meet close to coastal areas of Turkey, Cyprus and Middle East. A few storms are also expected in the Aegean Sea, under the core of the cut-off low, where small hail and graupel cannot be ruled out.

With mixing ratios greater than 8 g/kg and steep low/mid-level lapse rates, the air mass that lies in the Levantine Sea has high latent energy values. The violent displacement of this air mass by the approaching colder air masses from the west will result in strong DLS, stronger than 30 m/s in places. The overlap of 200-300 J/kg MLCAPE and DLS in areas with strong synoptic lift suggest that any developing storm will be able to produce severe weather events. Large hail and severe convective wind gusts will be the main threats, but waterspouts and tornadoes near the coasts are also expected.