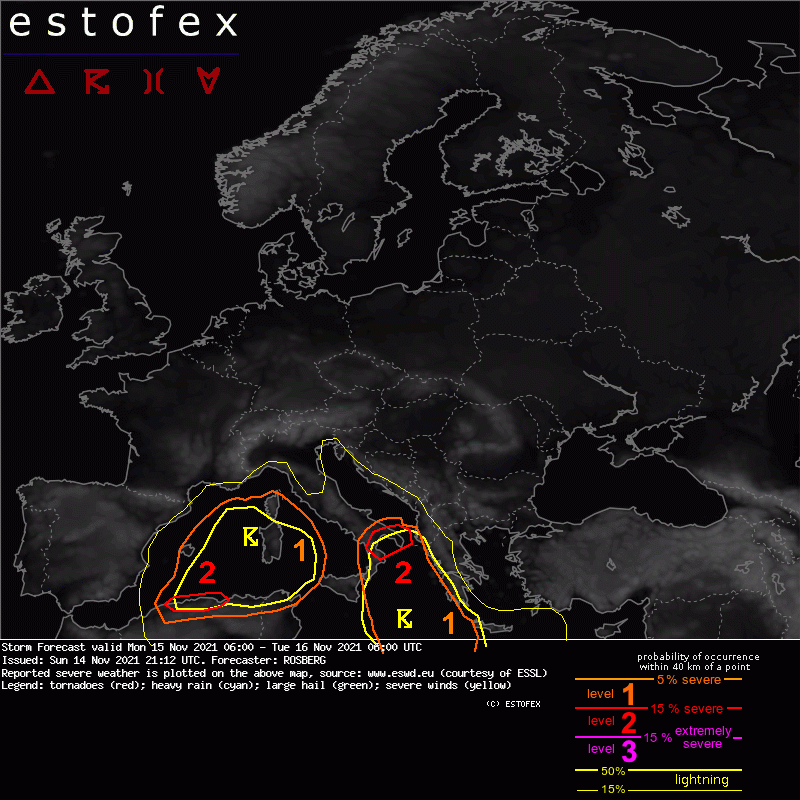 A level 2 was issued for northern Algeria and southern Italy for excessive convective precipitation.

A level 1 was issued surrounding the level 2 area with the same hazard but to a lower extent.

An upper level ridge/anticyclone over northern Europe is moving eastward, and this ridge is flanked by a mid-level trough over Russia that is moving eastward as well. At the surface a major high pressure over northeastern Europe and western Russia, with a ridge extending all the way to the British Isles, is moving southeastward. The high pressure, combined with a minor east moving surface low ahead of it over Russia, will generate a northerly flow of a cold airmass over Russia and down towards the Caucasus-region and northeastern Turkey.
The polar jet and polar front will be located across northeastern Atlantic and the Norwegian Sea, sending several frontal systems and surface lows northeastward towards the British Isles and northern Scandinavia.

The main focus for deep convection over Europe during the forecast period will be associated with an upper level cut-off low with a cool airmass over the western part of the Mediterranean Sea. This upper low is expected to move southward towards northern Algeria. At the surface a low just west of Corsica is moving slowly southward, and several surface troughs are located around this low over the western Mediterranean, triggering showers and storms.
Another area of interest is a minor surface low and associated frontal boundary south of Italy that is expected to move northward, and will bring showers and storms to especially southern Italy and the Ionian Sea region.

Showers and a couple of thunderstorms will occur and be triggered along the surface troughs located around the surface low just west of Corsica. Cold temperatures aloft combined with quite warm water temperatures across the western Mediterranean will create an environment of up to 200-500 J/kg MLCAPE. However, due to the limited amount of instability in the cool airmass with quite low EL-heights the thunderstorm activity will be somewhat limited.

Deep layer shear across the western Mediterranean Sea area will in some areas reach up to 10-18 m/s. Even stronger DLS can be found over the southwesternmost part of the Meditarranean Sea, but here convection will not be deep enough to generate lightning.
The surface low will also contribute to a pressure gradient with around 15 m/s winds in the lowest 1-3 km of the atmosphere across the coastal areas of southern France and northwestern Italy, Balearic Islands and northern Algeria and Tunisia. Hence, the convection might organize into clusters and/or lines with a threat of strong wind gusts and small hail in stronger cells.
The strong low-level winds generated by the pressure gradient could also generate some strong non-convective wind gusts outside convection over the mentioned areas, especially over the coastal areas of southeastern France and northwestern Italy. Here a small area with strong DLS and intense low-level winds will temporarily affect these areas Monday with 20-28 m/s winds in 850 hPa and up to 25-30 m/s 0-6 km bulkshear, according to the ECMWF-model. The conditions do not look favorable for deep convection right at the coast due to weak lapse rates, but strong to severe non convective wind gusts could occur.

The convective activity is expected to rotate around the upper low, and showers and storms could therefore repeatedly affect the same land areas. Sardinia, Corsica and northern Algeria and Tunisia seem to be particularly affected by training convection.
Mixing ratios and surface dewpoints in the cool airmass are not going to be impressive, but quite moist forecast soundings with a skinny CAPE profile do imply a threat for flash flooding in the mentioned areas where training cells are expected to occur, and especially in coastal areas with a high orography. Highest threat for flash flooding seems to be over northern Algeria where ECMWF 12z run indicate near 100 mm rainfall in the forecast period.
The coastal areas of southeastern France and northwestern Italy could also receive some heavy rain, especially first in the forecast period. However, here the lapse rates are weaker with more stable conditions preventing deep convection, and a level 1 has not been issued for these areas. That being said, a flash flood event or two cannot be ruled out, especially in the lower mountains.

Low LCLs with low level CAPE will make it possible for waterspouts to form near the surface troughs and the surface low where surface convergence will occur and where the low-level winds will be weak.

A minor surface low and associated frontal boundary located southeast of Italy and over the Ionian Sea are expected to move north- and northwestward. East of the low, a quite moist airmass is advected northward across the Ionian Sea towards Italy and the Adriatic Sea region, with surface dewpoints up to or slightly above 15 degrees Celsius. This will yield up to 500-1000 J/kg MLCAPE across the Ionian Sea.
Despite the lack of significant upper level forcing, quite numerous showers and storms are expected to occur and form along the frontal boundary by frontal lift. A few showers and perhaps a thunderstorm could also occur early in the day across the Adriatic Sea region.
As the low and frontal boundary move northward convective activity will spread into Italy and the Adriatic Sea region from the south. Showers and storms will weaken as the move into these areas due to weaker lapse rates. Further inland over Italy convection will also weaken and become elevated due to cool and stable low-level air. The highest impacts will therefore be felt in coastal regions of southern Italy. The activity might at times also affect western Greece and Albania.

The deep layer shear will be mostly below 10 m/s across the Ionian Sea region and across southern Italy.
The low vertical wind shear combined with quite moist sounding profiles, low LCLs and relatively deep warm cloud layer indicate a flash flood threat. The southerly flow across the frontal boundary will push training cells into southern Italy where some quite significant flash flooding might occur.

The low-level winds will also be quite strong along the frontal boundary with locally up to around 15 m/s in the lowest 1-3 km of the atmosphere across the Ionian Sea and southern Italy, with a risk of strong wind gusts near the Italian coastline. A hail event cannot be ruled out either in stronger cells.

Despite the quite strong low-level winds near the frontal boundary, a waterspout cannot be ruled out near the coasts where winds could be weaker, due to low LCLs with low-level CAPE occurring near the convergence area of the boundary.