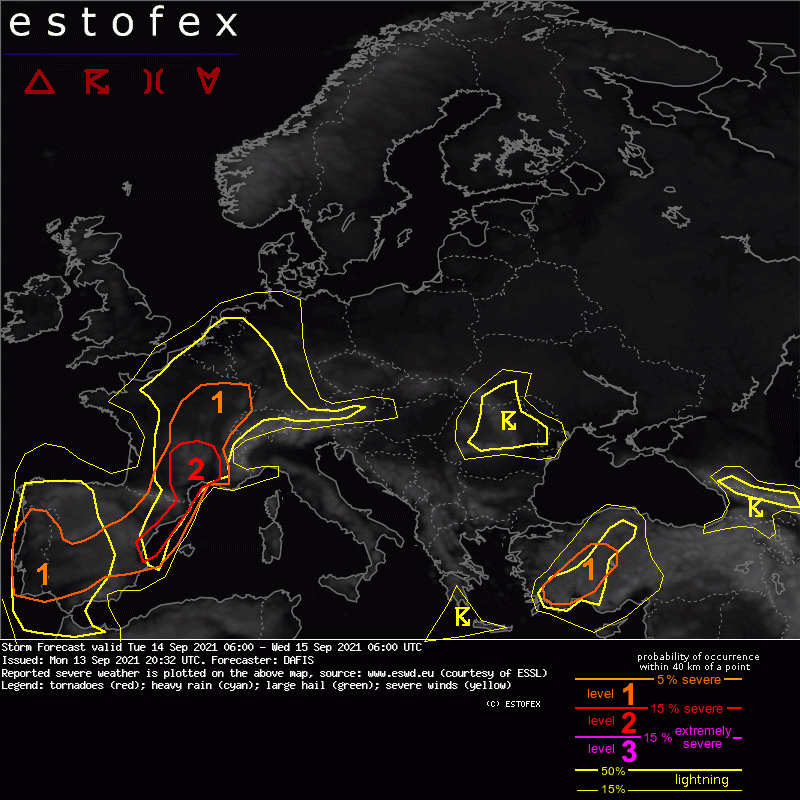 A level 1 was issued for parts of Portugal, Spain, France and W Germany mainly for excessive convective precipitation and large hail.

A level 1 was issued for parts of Turkey mainly for large accumulations of small hail and excessive convective rainfall.

Two main troughs can be found in the analysis maps over Europe, one with a positive tilt over the Iberian Peninsula and another one over the Balkans. An intensifying ridge over Central Mediterranean along with the upstream part of the first trough have established a strong southwesterly flow in western Mediterranean. The latter trough will create favorable conditions of DMC events over a limited area in Turkey, but the highly unstable air masses in the Aegean Sea may give birth to several waterspouts near the coasts fo Turkey, Cyprus and Greece.

The advection of PV over the Iberian Peninsula will provide lift to unstable air masses, mainly close to the coasts of Spain and France. The strong mid-level flow will result in strong DLS which will overlap locally with high CAPE and high SREH0-3km. Storms will be able to organize in MCSs and supercells, able to produce all kinds of severe weather. In Sough France, training convection may result in severe flash floods where PWAT locally exceeds 40 mm, and more to the south, in Spain, the main threat will be large hail. Moreover, low LCL values, high shear and SREH at 0-1km will create favourable environments for tornadoes.
In Portugal, the main threat will be excessive precipitation from slow-moving storms, especially close to the coasts.

Rather unseasonably low freezing levels, MUCAPE locally exceeding 500 J/kg and steep lapse rates will create favourable conditions for storms to produce small hail. Slow-moving storms may also produce excessive amounts of precipitation, mainly in the form of small hail. In addition, waterspouts and landspouts are expected near the coasts of the Aegean Sea where rotation of highly unstable low-level air masses is forecast during DMC.