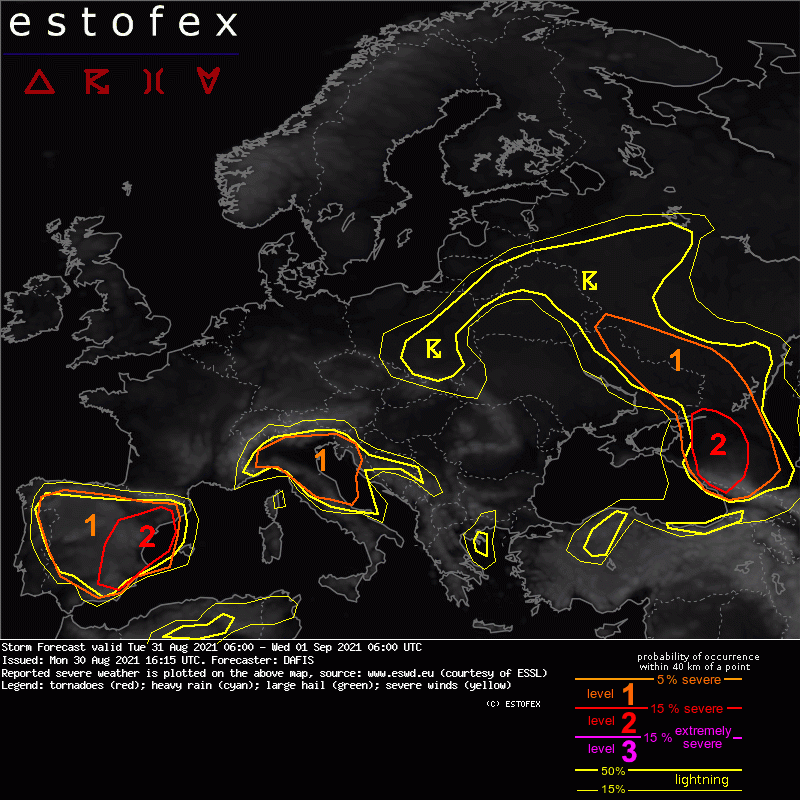 A level 2 was issued for parts of Spain mainly for excessive convective precipitation, severe convective wind gusts and large hail.

A level 1 was issued for parts of Spain and Portugal mainly for excessive convective precipitation, severe convective wind gusts and large hail.

A level 2 was issued for parts of SW Russia and N Georgia for large hail, severe wind gusts, tornadoes and excessive convective precipitation.

A level 1 was issued for N Italy, Slovenia and Croatia mainly for excessive convective precipitation and large hail.

A cut-off low over Central Europe is accompanied by several short waves with high PV in the upper-troposphere, providing lift to unstable air masses. It also moves slowly east and the downstream QG-lift of unstable air masses in East Europe will result in numerous DMC events on Tue 31/08. Another hot-spot for DMC will be eastern Spain, where another short-wave trough is expected to pass over the area in the afternoon, during the maximum diurnal heating. A zonal belt of a strong westerly mid-level flow over the Mediterranean increases DLS which also increases the threat of severe storms where it overlaps with high CAPE.

Very steep lapse rates are found over the Iberian Peninsula, as well as very moist and warm air masses in the Mediterranean coasts of Spain. Storms developing in the afternoon will get benefit of more than 15-20 m/s DLS to organize into MCSs and supercells. Large or very large hail and severe convective wind gusts will be the main threat. Moreover, given the high PWAT values close to the eastern parts Spain, slow moving storms will be able to produce excessive precipitation (even small hail in large quantities).

A pool of very unstable air masses are found over this part of the continent. A near-surface cold front coming from the west on Tue 31/08 will provide lift to these warm and moist air masses, during the maximum diurnal heating. Supercells are well possible even if the DLS reaches values only up to 15 m/s locally. High SREH values suggest that rotating updrafts can develop in a short period of time and will be able to produce all kinds of severe weather. Hail up to 5-6 cm in diameter is possible, but also tornadoes cannot be ruled out. Low LCL values, high 0-1km shear and veering wind profiles that create high SREH0-1km values in the NWP models show a high potential for a few tornadoes.

Storms will be mostly diurnally-driven and the main threat will be large hail (up to 2-3 cm). In addition, the vertically saturated profiles and the weak to moderate mid-level wind field show a high threat for downpours and large accumulations of small hail. The storms will stay offshore during the night, in the Adriatic Sea.