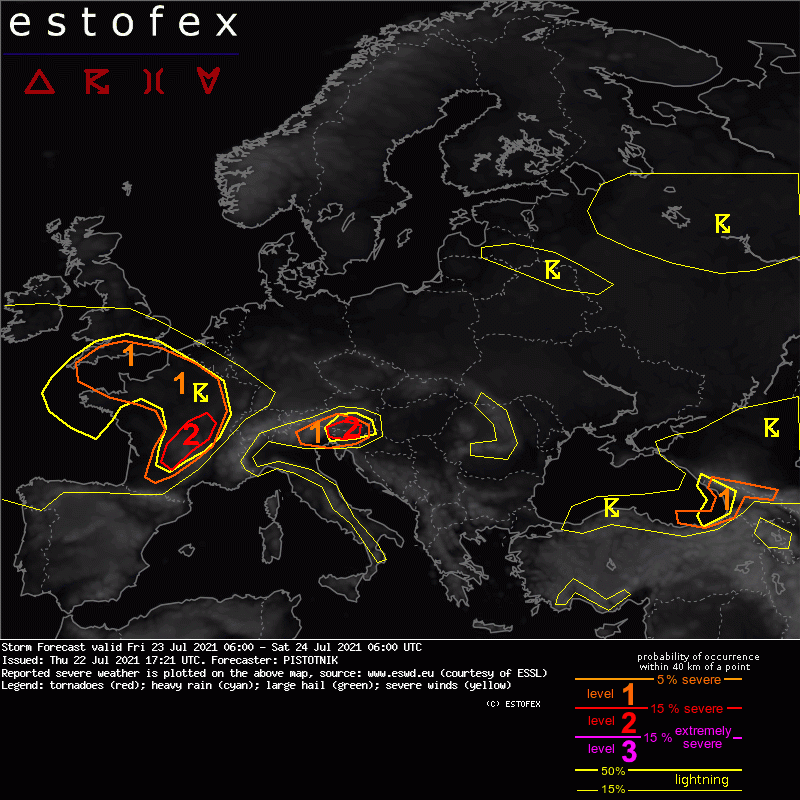 A level 1 and level 2 are issued for central France for severe convective wind gusts, excessive convective precipitation, large hail and to a lesser degree for tornadoes.

A level 1 is issued for N France and S England mainly for excessive convective precipitation.

A level 1 and level 2 are issued for S Austria, NE Italy and Slovenia for large hail, excessive convective precipitation and to a lesser degree severe convective wind gusts.

A level 1 is issued for the Russian Caucasus range, parts of Georgia and NE Turkey for excessive convective precipitation and for non-supercellular tornadoes (waterspouts).

The forecast maps show a classic mid-summer pattern with limited pressure gradients and warm, rather dry air across much of Europe. A blocking, though slowly weakening, anticyclone is centered over the North Sea and is flanked by two cut-off lows that leisurely move from the Bay of Biscay (Fri 06 UTC) to the Channel (Sat 06 UTC) and from Austria (Fri 06 UTC) to Serbia (Sat 06 UTC), respectively. The subtropic branch of the jet stream connects the southern flank of the cut-off lows and extends further SE-ward to the E Mediterranean Sea and the Near East. The polar jet is displaced far northward to Iceland and N Scandinavia, before it bends south around a polar trough that advances from Finland to NW Russia. This trough is associated with an intrusion of cold air that terminates a more than month-long period of anomalously high temperatures in NE Europe.

An elevated mixed layer from NW Africa and the Spanish Plateau shifts NE-ward and is advected over rich low-level moisture over the W Mediterranean Sea and the French lowlands. By Friday evening, CAPE on the order of 1000-2000 J/kg, locally more, will likely build in this process. It overlaps with excellent wind profiles for organized storms, namely strong 0-6 km bulk shear in excess of 20 m/s and strongly curved low-level hodographs (0-3 km storm-relative helicity often between 150 and 300 m^2/s^2).
The limiting factor is a very strong cap, that will be impermeable at the sea breeze front along the Spanish east coast and still hard to overcome in inland parts of France. Convective initiation will likely not happen before evening, when persistent synoptic lift (both from warm air advection and positive vorticity advection) and increasing mesoscale lift from the advancing cold front finally erode the cap. Considering the inherently high uncertainties in such a volatile "loaded gun" environment, forecast models show a remarkably high agreement for convective initiation along the cold front in south-central France in the 18 to 21 UTC time frame. It appears likely that a large MCS will form and move NE-ward overnight, which can bring all kinds of severe weather under such a robust CAPE-and-shear overlap. The main risks are severe wind gusts along the leading edge and subsequent excessive precipitation. Discrete and/or tail-end storms can likely turn supercellular with additional risks of large to very large hail and one or two tornadoes, the latter due to increasing low-level shear when the boundary layer starts to decouple at nightfall.
The severe weather risk gradually decreases in the latter half of the night. Additional storms may form over N France, the Channel and S England, but their severe weather risk should mainly be confined to heavy rain, while their elevated nature keeps the other hazards on the low side.

Synoptic lift ahead of the eastern cut-off low and orgraphic lift of upslope / upvalley circulations allow convective initiation also along the southern flank of the Alps in a fairly strong kinematic environment with 20 m/s unidirectional 0-6 km shear. Convective initiation is more likely towards the NE, but there it may happen too early to allow more CAPE than a few hundred J/kg. These storms will likely struggle to organize and become longer-lived.
Towards afternoon, an "Alpine plume" of steeper lapse rates will establish and move SE-ward onto the adjacent forelands, and secondary storms will likely propagate towards the increasing CAPE reservoir. Since synoptic lift departs the area in the afternoon, it is unclear how far this propagation series can proceed. CAPE on the order of 500-1000 J/kg should still be consumable in S Austria and W Slovenia, while the even higher CAPE values on the Italian side could remain largely untouched. A small level 2 highlights the best overlap of all ingredients, where multicells and a few supercells are likely. The main risks are large to isolated very large hail and heavy rain, the latter especially in case of backbuilding or orographic anchoring. In addition, a few severe downbursts are not ruled out.
Convection will quickly die off in the evening.

An ill-defined cold front brings cooler and moist air southward. Forecast models show a few hundred J/kg CAPE, but with rather low cloud tops that are capped by the warm and slowly receding SW-erly flow aloft. While this "reverse-flow setup" appears conducive to almost stationary and potentially flash-flood producing storms, especially at the north side of the mountains, convection will likely be embedded and may exhibit little or even no lightning activity, which makes it difficult to disentangle the convective contribution to the rain amounts. A level 1 seems to be the best compromise.
Low-topped convection will likely continue over the E Black Sea overnight, when the low-level wind field turns increasingly cyclonic while the mid-level winds further relax. A few waterspouts become more and more likely towards Saturday morning.

The tail of the same cold front also moves SW-ward across the Baltic Sea on Friday night. Fed by anomalously warm sea surface temperatures, the developmet of low convective clouds appears likely and equilibrium level heights are predicted to rise to ~700 hPa by Saturday morning. This cloud depth is not enough for the formation of (warm) rain, let along lightning, but might suffice to spin up a few waterspouts along the convergence zone.