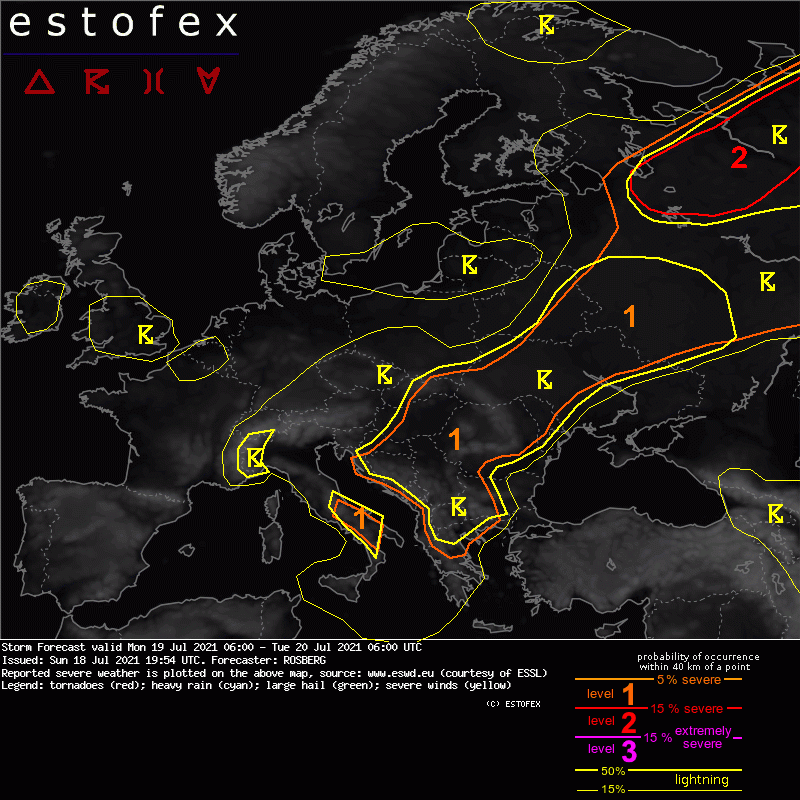 A level 2 was issued across northwestern Russia for severe wind gusts, large hail and to a lesser extent excessive precipitation.

A level 1 was issued surrounding the level 2 for the same hazards, but to a lesser extent.

A level 1 was issued for southwestern Russia, Ukraine, Belarus, Romania and Moldavia for excessive precipitation, large hail and to a lesser extent for severe wind gusts.

A level 1 was issued across the Balkans, Hungary, Slovakia, Albania and southern Italy for excessive precipitation.

A level 1 was issued over northern Greece and Bulgaria for severe wind gusts, large hail and to a lesser extent excessive precipitation.

An upper level low over southern Italy, Adriatic Sea, southwestern Balkans and northwestern Greece is almost stationary and weakens. A mid-level long wave trough over northern Europe is nearly stationary as well. Around the base and on the down shear flank of this upper trough, several short wave troughs are propagating eastward. The first shortwave is moving east- northeastward from Finland to northwestern Russia. The second shortwave is moving eastward from the Baltic States to western Russia, while the third shortwave is moving southeastward from the North Sea to central Europe.
Western Europe from the Iberian Peninsula up towards the British Isles is dominated by upper level ridging.

At the surface an area of low pressure just east of Svalbard is generating a west- and northwesterly flow of quite cool air across much of northern and north-central Europe. Some showers and isolated storms are possible over southeastern Germany, Austria, Poland, the Baltic Sea area and far northern Norway, Finland and Russia. However, dry low- and mid-level air and/or low EL-heights will prevent any deep and vigorous convection in these areas.
An associated eastward propagating cold front is located from northwestern and western Russia down over eastern Europe to the Balkans, and this frontal boundary is the main focus for thunderstorm initiation.

A nearly stationary surface high pressure is located over the British Isles, with a surface ridge extending to the northwestern part of continental Europe. In connection with the surface high and the upper level ridging aloft, large scale subsidence will result in a dry low- and mid-level air with weak lapse rates. Hence, mostly dry and very warm conditions will prevail across southwestern and western Europe with only a few isolated showers or thunderstorms possible across the UK and northwestern France and Benelux.
Northern Africa, Turkey and the Middle East will also be dry with lots of dry air and weak lapse rates.

Elevated showers and storms will be possible Thursday morning along the cold front over northwestern Russia, where also some strong QG-forcing is occurring down shear from the shortwave trough moving into northwestern Russia. Strong deep layer shear of 20-25 m/s will be present with both supercells and multicells possible with risk of large hail and heavy rain, but wind potential will be limited at first due to the stable boundary layer. Later in the day solar heating will destabilize the boundary layer and together with 500-1000 J/kg MLCAPE, storms will increase in both coverage and intensity along and just ahead of the cold front. Deep layer shear will continue to be very strong, up to 20-25 m/s, and surface based multicells and supercells will be possible. Long straight hodographs favor splitting storms with risk of large hail and severe wind gusts. Models indicate that the convection will quite rapidly organize into a linear MCS racing eastward as a squall line, with 0-3km bulk shear of 10-15 m/s and winds in 850 hPa up to 15 m/s. Hence, a quite significant wind threat is possible with this MCS and multiple severe wind gusts events are possible.
Heavy rainfall is also possible with these storms, but due to the rapid storm motion no widespread flooding is expected.
The storms will move out of the area during the evening.

Elevated showers and thunderstorms will locally be ongoing along the cold front Thursday morning over southwestern Russia, Belarus, Ukraine, Romania and Moldavia.
As the day progresses solar heating combined with moisture pooling along the front, and 6.5-7 K/km mid-level lapse rates will yield up to 1000-2000 J/kg MLCAPE. Despite lack of significant upper level synoptic scale forcing, additional storms will form along the cold front by frontal lift. Also, some isolated showers and storms are expected to form ahead of the front by orography, solar heating and outflow boundaries.
The deep layer shear will be mostly low, under 10 m/s, but some local pockets of 10-15 m/s will be present with some storm organization into clusters and/or lines with threats of severe wind gusts and large hail. The biggest threat will however be flash flooding due to a great moisture content by surface dewpoints up to around 20 degrees Celsius and precipitable water of 30-40 mm.
ECMWF is indicating an area with less shower and storm activity in a corridor across western Russia in the vicinity of Moscow. This is due to some drier low- and mid-level air with weaker lapse rates air, and thus no high probability lightning was chosen for that area.
The activity will weaken in the evening and overnight hours as the boundary layer cools, but a couple of elevated showers and storms are still possible during the night, especially over Romania.

A moist airmass will be in place over large parts of southeastern Europe with mixing ratios up to 12-15 g/kg and surface dewpoints up to around 20 degrees Celsius. Elevated showers and storms will be ongoing in some places Thursday morning, especially over the northern parts of the Balkans, northern Greece and Ionian Sea. The GFS model also has some isolated showers or storms over the central part of the Mediterranean Sea south of Italy. These storms are triggered by the tail of the cold front that is located across the northern Balkans and by areas of surface convergence across Greece, Italy and the Mediterranean Sea, supported by some forcing from the upper level low.
As the day progresses solar heating will yield up to 500-1500 J/Kg MLCAPE, locally higher, with additional storms forming by diabatic heating and orography.
Moist sounding profiles and quite low LCL-heights combined with low DLS and extensive warm cloud layer pose a significant heavy rainfall threat. A large hail and wet downburst event cannot be ruled out in stronger storms, but the excessive precipitation and flash flood risk will be the main hazard with these storms.

The upper level low will provide stronger upper level forcing and stronger DLS of 10-20 m/s across northern Greece, North Macedonia and Bulgaria. However, here weaker lapse rates combined with drier low- and mid-levels will make convection more isolated, weaker and shallower. Nevertheless, storms that manage to form in these areas, where the upper forcing might steepen the lapse rate enough and moist the mid-levels, can develop and organize into multicells and perhaps some transient supercellular structures with the main threats being large hail and severe wind gusts.

The Alps between Italy and France will have enough steep mid-level lapse rates and moisture at low- and mid-levels to form isolated showers and thunderstorms over the mountains in the afternoon by orography and surface heating, with MLCAPE values of 500-1500 J/kg. The main threat from these storms will be excessive rainfall since they are forming in an environment of low vertical wind shear, and thus moving slowly. But some hail and strong wind gusts cannot be ruled out in stronger cells. The rest of the Alpine region looks to be mostly dry with just a slight risk of an isolated shower or storm due to dry low- and mid-level air with weak lapse rates. However, the GFS model indicates some activity over northern Italy with showers and storms having some downdraft potential due to dry low-level air, but the extent of this is very uncertain since ECMWF and ICON models do not simulate any precipitation.
Showers and storms will die out in the evening due to lack of solar heating.


The UK, northwestern France and Benelux

Despite the surface high pressure and ridging aloft, some isolated showers and thunderstorm might develop over these areas Monday afternoon. Mixing ratios up to 10-12 g/kg with surface heating will yield up to around 500 J/kg MLCAPE, with locally up to 1000 J/kg over southeastern England. DLS of 10-15 m/s will be possible over England and France with risk of strong wind gusts and hail, but the coverage does not look widespread enough to warrant a level 1.
Any shower or storms will decay in the evening due to lack of diurnal heating.


Caucausus-region
Isolated showers or storms are possible across the mountains in the Caucasus region with downdraft potential, due to a well-mixed boundary layer with a high CB-base, but dry air and low EL heights will prevent any widespread and vigorous convection.