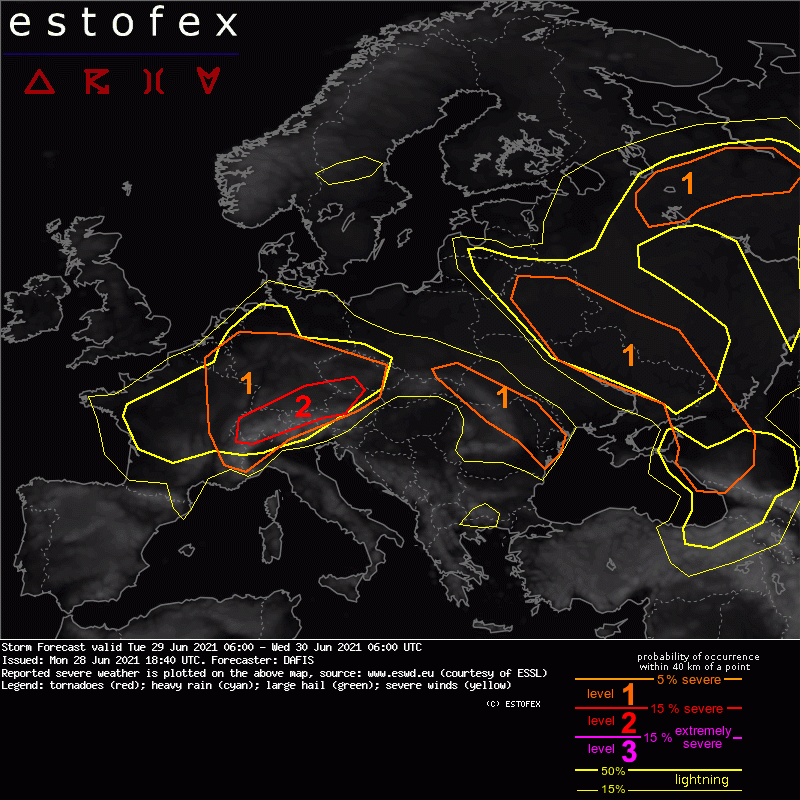 A level 2 was issued for Switzerland, S Germany, and parts of Austria and the Czech Republic for excessive convective precipitation, large hail, severe convective wind gusts and tornadoes.

A level 1 was issued for France, Luxembourg, S Belgium, Switzerland, Germany, and parts of Austria, N Italy, and the Czech Republic mainly for excessive convective precipitation and large hail.

A level 1 was issued for parts of Belarus, Ukraine and W Russia mainly for large hail and excessive convective precipitation.

A level 1 was issued for parts of NW Russia for large hail, severe convective wind gusts and excessive convective precipitation.

A cut-off low over France brings unseasonably cold air masses in western Europe but also pushes warm and moist, and thus unstable air masses towards central Europe where we expect the most severe storms to develop. Another short-wave trough develops in NE Europe and is associated with a surface low-pressure system in Russia, and its almost stationary front will be another hot spot for DMC events. The rest parts of the continent, in Scandinavia and Mediterranean, will be mostly thunderstorm-free except local short-living storms that will develop during the maximum diurnal heating.

.... Switzerland, S Germany, and parts of Austria and the Czech Republic ....

Warm and moist air masses lie in the northern parts of the Alps where several lifting mechanisms are expected to trigger storms on Tue 29/06. First, synoptic lift during the advection of high mid/upper-level vorticity together with a surface cold front coming from the west will lift unstable air masses during the maximum diurnal heating. The presence of a mid-level jet increases DLS to 15-20 m/s which overlaps with high MUCAPE mostly in Switzerland, S Germany and the W Czech Republic. In addition, high PWAT values in NWP model outputs suggest that storms will be able to produce excessive precipitation, especially if an MCS develops. If isolated storms manage to develop, mainly ahead of the front, the main threat will be large hail and severe wind gusts, but also tornadoes are well possible. Curved forecast hodographs show veering wind profiles and locally enhanced SREH0-1km and low-level shear will be beneficial for tornadogenesis. The tornado, hail, and wind threats will be reduced during the night due to elevated convection, but flash floods will continue to pose a threat until the early morning on Wed 30/06.

A note-worthy overlap of high CAPE and shear was responsible for issuing a Level-1 threat over this region. CI is expected in the local afternoon on the mountains, and storms will be able to organize while moving fast S-SE. Large hail and severe wind gusts will be the main threats.

Kinematics do not seem impressive over eastern Europe, but several convergence zones and short-wave troughs will assist in the development of numerous storms. Slow-moving storms and saturated vertical profiles increase the probability of flash floods and large amounts of small hail. A few large hail events cannot be ruled out where CAPE locally reaches high values. Storm activity may continue during the night, especially in NW Russia where a stationary front is about to form and will constantly feed storms with heat and moisture.