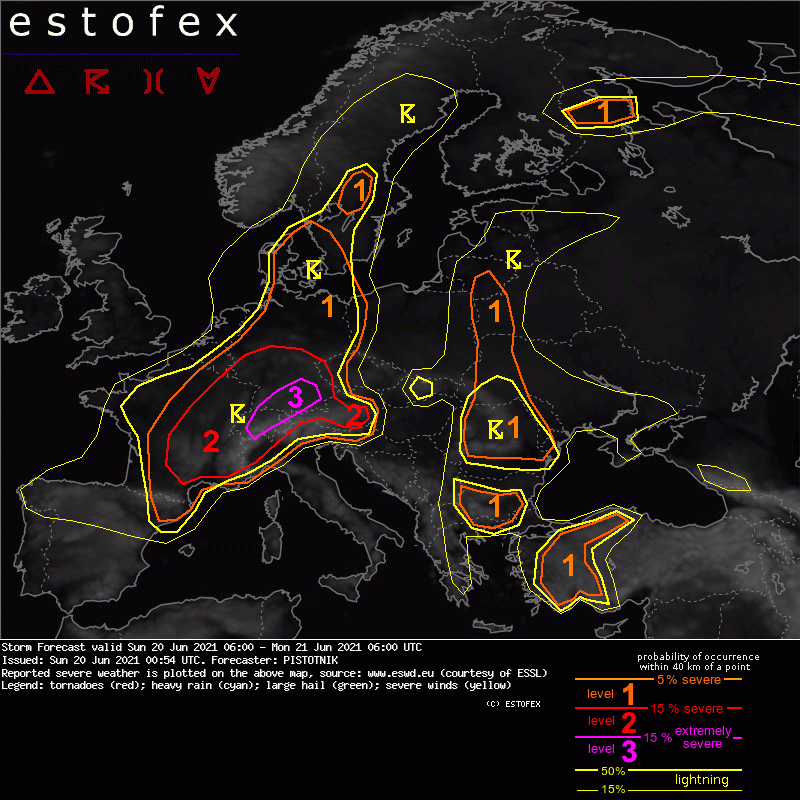 A level 3 is issued for parts of Switzerland and Germany for severe convective wind gusts and large hail.

A level 1 and level 2 are issued for NE Spain, France and Belgium for severe convective wind gusts, large hail, excessive convective precipitation and to a lesser extent for tornadoes.

A level 1 is issued from E Finland into NW Russia for severe convective wind gusts, large hail and tornadoes.

A level 1 issued for Bulgaria, W and central Turkey mainly for large hail and to a lesser degree for excessive convective precipitation and severe convective wind gusts.

A level 1 is issued for Romania for excessive convective precipitation and to a lesser extent for large hail.

A level 1 is issued for the W Ukraine, W Belarus and Lithuania for large hail, severe convective wind gusts and to a lesser extent for excessive convective precipitation.

A long-wave trough stretches from the Norwegian Sea to the British Isles and Spain. Between this trough and a ridge across central Europe, a deep and strong S- to SW-erly flow (20-30 m/s at 500 hPa) advects very warm to hot air as far northward as Sweden and Finland. Two embedded short-wave troughs translate from central Germany (Sun 06 UTC) to central Sweden (Mon 00 UTC) and from Catalonia (Sun 06 UTC) to central Germany (Mon 00 UTC), respectively, and modulate the position of a diffuse, wavy but otherwise stationary frontal boundary. Especially the second short-wave trough will be the main focus for severe thunderstorm activity.
Further downstream, an old cut-off low over Romania, Bulgaria and W Turkey slowly fills and creates unsettled, moderately warm weather in these regions. At its forward flank, another stream of hot air from the Russian plains is directed NW-ward to Belarus and the Baltic States. The Mediterranean region and European Russia are under anticyclonic influence with calm and anomalously warm weather.

The weather pattern brings together the ingredients for organized, long-lived and severe thunderstorms over an exceptionally large area. Steep lapse rates from NW Africa and Spain are advected on top of decent, though somewhat variable, low-level moisture in west-central Europe with 2m dewpoints mostly in the mid- to upper tens. After some hours of daytime heating and supported by a return of strong warm air advection, CAPE on the order of 500-2000 J/kg builds by afternoon and is collocated with 0-6 km shear between 15 and 25 m/s. In general, CAPE is higher towards the SE and shear stronger towards the NW, but the overlap is robust.
At the time of writing (Sat 22 UTC), intense and organized storm activity in the range of the diffuse frontal boundary has spread from France into Belgium, Luxemburg and W Germany. It is expected to overspread most of the W half of Germany in the course of the night while it slowly weakens. Westerly outflow winds will probably push as far eastward as the Czech and Austrian border and align with the north Alpine rim in Switzerland by Sunday morning. With the onset of daytime heating and increasing warm air advection aloft, suppressed vertical mixing in this slightly cooler but moist air can create a "loaded gun" situation with CAPE approaching or even exceeding 2000 J/kg (a similar CAPE amount was already sampled by the Saturday 12 UTC soundings from Payerne and Munich). In addition, surface winds gradually veer from westerly to northerly to easterly directions under the influence of an Alpine heat low. Depending on the balance between this Alpine pumping and a possible downward propagation of hot and dry Foehn winds in the central Alps, the convergence zone may further sharpen and attain the characteristics of a dryline in the course of the day while it is predicted to remain stationary along the north Alpine rim.
Thunderstorm activity on Sunday morning will initially be widely scattered, mostly elevated and poses a limited severe weather risk. It might even completely decay for a couple of hours. As daytime heating proceeds and the lift area of the short-wave trough advances NE-ward, scattered surface-based initiation becomes more and more likely from late morning onwards in NE Spain and S France, from early afternoon onwards in E France and Switzerland, and in the latter half of the afternoon in Germany.
Most forecast models simulate a more or less quick upscale growth into one or two large bowing lines, which can produce widespread severe and even scattered extreme (> 32 m/s) wind gusts, owing both to the strenghtening mid-level wind field and plentiful subcloud evaporation due to the rather high cloud bases. However, the scatter of simulated storm tracks is also extremely large, spanning a more than 500 km wide corridor from Luxemburg in the NW to the German/Austrian border in the SE. These uncertainties can be tracked back on the one hand to inherent difficulties of forecast models to represent an as dynamic and fast-moving feature as this short-wave trough, on the other to the disjunction of lift mechanisms: While the dominant source of lift at low levels is the above-mentioned outflow boundary / dryline near the north Alpine rim, the bulk of the mid-level forcing connected to the short-wave trough will race quickly northeastward across France and Germany. The possible storm tracks are therefore connected to the relative importance of these two lift mechanisms in the "forecast model world".
The mean track of a long-lived bow echo - shall it develop - runs roughly from Bern (Switzerland) towards Leipzig (Germany). While the forecast model pool exhibits a slight overhang towards the northwestern solutions (i.e., driven more strongly by the synoptic lift of the trough), the sheer abundance of CAPE in the loaded gun environment in the Alpine forelands and the more dependable lift along the outflow boundary would be weighty arguments for a more southeasterly track. Taking further into account the higher conditional wind risk in the drier environmental air further SE and the backstop of a possible, more discrete, supercellular storm mode with an additional risk of large to very large hail, the risk level areas are slightly adjusted towards the southeast. Despite these large uncertainties, a level 3 corridor seems to be warranted where both a bowing line with severe to extreme wind gusts or supercells with large to very large hail may occur.
In the course of the evening and night, storms will cross large parts of Germany. They will gradually weaken and become elevated when they outrun the zone of robust CAPE. The hail hazard decreases first, whereas the risk of severe wind gusts and heavy to excessive rain still remains slightly enhanced until Monday morning.

As the short-wave trough and its dominant wave of storms depart, moderate CAPE and moderate to strong vertical wind shear still remain in place across much of France. In the absence of synoptic lift, mesoscale lift mechanisms like thermally or dynamically driven flow convergence over mountains, cross circulations in the range of the diffuse frontal zone, or outflow boundaries take over as possible initiation mechanisms. Scattered storms in form of multicells, supercells or a few large clusters are possible all evening and night long, only slowly tapering off. While storm coverage will likely not be too high, all kinds of severe weather may occur. Next to large hail, severe downbursts and excessive rain, also one or two tornadoes are not ruled out, owing to lower cloud bases and increasing vertical wind shear also across lower levels.

Robust CAPE (500-1500 J/kg over the Alps, around or above 2000 J/kg over the forelands) has built after several days of net synoptic subsidence and strong capping (resulting from a combination of warm air advection and negative vorticity advection ahead of the ridge axis). It is collocated with 10-15 m/s deep-layer shear, as slightly enhanced W- to NW-erly mid-level winds round the ridge axis. Vertical wind shear across lower layers is weak.
Isolated to scattered afternoon storms are expected to overcome the synoptic subsidence and entrainment of dry environmental air. They can organize into strong multicells or transient supercells with a main risk of large to very large hail and secondary risks of localized downbursts and flash floods. Storms will be strictly tied to the mountains and decay as soon as they propagate into the strongly capped forelands, and activity should also quickly die off in the evening.
The only exception is NW Italy, where a larger and more persistent storm cluster may evolve in the evening, in case the fringes of the trough's synoptic lift spread far enough eastward. This scenario would further enhance the severe weather risk and shift it somewhat more to severe winds. It is not ruled out, albeit unlikely, that such an MCS may propagate a little distance into the western Po Valley in the evening and first half of the night.

Some CAPE is also present ahead of the first (northern) short-wave trough, ranging from a few hundred J/Kg in Denmark and Sweden to locally up to 1500 J/kg in a narrow zone ahead of the trough axis in NE Germany. Scattered thunderstorms may be active as a leftover from the previous night or form anew in the course of the late morning and afternoon. Fairly strong deep-layer shear around 20 m/s and veering wind profiles allow well-organized multicells and perhaps supercells with a risk of large hail, severe wind gusts and localized heavy rain. The severe weather risk is highest in NE Germany, which falls just short of a small level 2 (due to the fragile-looking CAPE tongue).
As storms move northward into Sweden, they gradually run out of CAPE and can merely hang on the trough's strong lift for some more hours. While the wind field remains strong, the increasingly embedded (and possibly elevated) nature of this convection decreases the severe weather risk.

... Level 1 belt in the bordering area of Finland and Russia ...

A narrow belt of some hundred J/kg CAPE is also present at the northern rim of the warm airmass and overlaps with enhanced vertical wind shear across all layers, including 10-15 m/s low-level shear. As the frontal boundary turns cold-active in the course in the afternoon and evening, scattered multi- or supercellular storms are possible. Isolated severe wind gusts, marginally large hail and tornadoes may occur. A limiting factor is the rather weak lapse rates, and the therefore limited CAPE magnitude.

Moist, moderately warm air in the range of the cut-off low allows up to 1000 J/kg CAPE. Scattered afternoon storms are expected, especially (though not exclusively) over mountains. The main risks are excessive convective precipitation next to marginally large hail or copious amounts of small hail.
In the periphery of the cut-off low from Bulgaria to Turkey, moderately enhanced deep-layer shear (10-15 m/s) and slightly steeper lapse rates shift the main risk more towards hail, while localized excessive rain and severe wind gusts are not ruled out, either.

In the warm air advection regime ahead of the Balkans cut-off low, steep lapse rates move on top of decent low-level moisture, resulting in CAPE on the order of 500-1500 J/kg. Despite some synoptic lift, breaking the capping inversion may be a difficult venture. ECMWF and ICON-EU show no signals for convective precipitation at all, whereas GFS offers scattered afternoon and evening storms. Despite weak vertical wind shear, strong pulse storms could produce isolated large hail, downbursts or heavy rain, in case the cap breaks as suggested by GFS. A combination of a (low-end) level 1 and a low-probability lightning area covers this scenario.