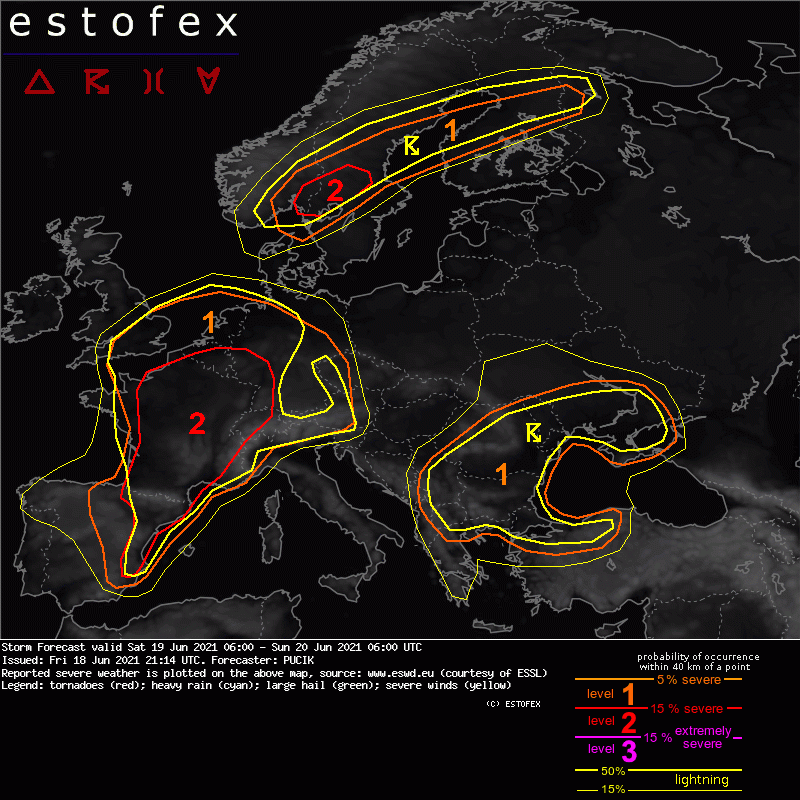 A level 2 was issued in a belt from E Spain to France, S Belgium, W Switzerland and SW Germany mainly for large to very large hail, damaging wind gusts and also tornadoes (highest risk over S France during the night).

A level 1 was issued across SE UK, Holland and NW Germany mainly for heavy rainfall, large hail and to the lesser degree for severe wind gusts.

A level 1 was issued for the Alps, SE Germany and SW Czech Republic mainly for large hail, severe wind gusts and heavy rainfall.

A level 2 was issued across Sweden mainly for large hail, damaging wind gusts and to the lesser extent for tornadoes.

A level 1 was issued from Sweden to Finland mainly for large hail.

A level 1 was issued across Serbia, W Bulgaria, W Romania and Ukraine mainly for large hail and severe wind gusts.

A level 1 was issued across E Bulgaria, E Romania and N Turkey mainly for heavy rainfall.

A deep trough covers W Iberia with a strong 40+ m/s jet-streak at its southeastern flank. In response to the strong southerly flow, trough is forecast to lift N-ward, being replaced by another low moving from the Atlantic E-ward. As the trough lifts N-ward, two short-waves are simulated along its eastern flank: one over Iberia and another one across W France. The exact timing and location of the troughs is different among the individual NWP models. Towards the N, a short-wave is also forecast to cross from Sweden into Finland. Towards the E, a ridge will has amplified from Central Russia into Poland with a low remaining over the Black Sea and Romania / Bulgaria.

Closer to the surface, a wavy frontal boundary will stretch from Scandinavia through the Northern Sea into France and Iberia. More significant overlap of abundant lower tropospheric moisture and mid-tropospheric lapse rates exceeding 6.5 K/km is anticipated across E Spain, W. Meditteranean, S to E France, Switzerland, Germany and the northern Black Sea.

Impressive kinematic setup is forecast across the area, supporting high degree of convective organisation. The strongest shear is forecast to develop in the late afternoon to overnight hours with 0-6 km bulk shear ranging from 25 to 35 and 0-3 km shear exceeding 20 m/s. Stronger low-level shear and more curved hodographs are simulated in the overnight hours across S and SE France with 0-3 km SRH locally exceeding 400 m2/s2. Intense and long-lived supercells and/or bow-echoes are forecast following the succesfull initiation. Very large hail could occur given 20 m/s inflow into the storms, promoting wide updrafts. Given the strength of the background flow, damaging winds, including 32+ m/s wind gusts are plausible. Tornado threat will be present in the night-time hours over SE France as well.

While NWP agrees on the kinematics, timing of the short-wave crossing the area and the degree of CAPE remain uncertain. There is some concern that skinny CAPE profiles caused by the lack of steep mid-tropospheric lapse rates may limit the sustainance of initial updrafts in such a powerful shear. Lvl 3 was considered for a belt from S to Central France, but was discarded due to the aforementioned uncertainties.

While the kinematic environment will be less impressive here than to the S / SE, 0-6 km bulk shear should still be more than sufficient for well-organised storms, including supercells. Storms development will be likely tied to the passage of the short-wave trough that will start over the Bay of Biscay and move quickly towards the UK. Storm activity should start in the morning hours over SW France, spreading north during the day. Storms will be capable of (very) large hail and severe wind gust.

Cyclogenesis is forecast along the frontal wave ahead of the trough with backing low-level winds across N France. This will increase the amount of SRH and 0-1 km bulk shear and elevate the tornado threat by the evening hours. Currently, the exact location of SRH bullseye is not consistent among the NWP and thus it is not possible to pick up the region with the highest tornado threat.

Towards the night, strong WAA regime will support widespread storm initiation and one or two systems will cross S UK and BENELUX. As the boundary layer stabilizes and/or systems cross the frontal boundary, they will become elevated, reducing the severe wind gust threat to some degree. Nevertheless, isolated large hail and very heavy rainfall threat will still be present.

Steeper lapse rates will secure higher CAPE values across this area with MLCAPE likely locally exceeding 2000 J/kg, especially in vicinity of the Alps. Vertical wind shear will decrease from E France eastwards and increase from morning towards the late evening hours. Isolated initiation at best is forecast in the afternoon hours, followed by a potential increase in the convective coverage in the evening and overnight hours. Overall coverage may depend on the development upstream over S and Central France and the propagation of evening storms into this area. Given steep lapse rates and favorable wind profiles for well-organised convection, large to very large hail and damaging gusts will be the main threats.

A frontal wave is forecast to develop ahead of the fast-moving short-wave, promoting synoptic-scale lift especially to the north of the warm front. Widespread convection is forecast to develop on the cool side of the boundary in the elevated mode, posing threat of isolated large hail. Towards the warm part of the boundary, initiation will be more isolated. These surface-based storms will form in the environment of around 1kJ/kg of MLCAPE, straight hodographs with 20+ m/s and 15+ m/s of 0-6/0-3km bulk shear respectively and thus will likely organize into splitting supercells or bow-echoes. Severe wind gusts and large hail is likely and tornadoes can not be ruled out along the warm front, where hodographs will be more curved. Towards the late afternoon and night hours, storms may rapidly spread across the Baltic Sea into Finland in the elevated form, posing a risk of isolated large hail.