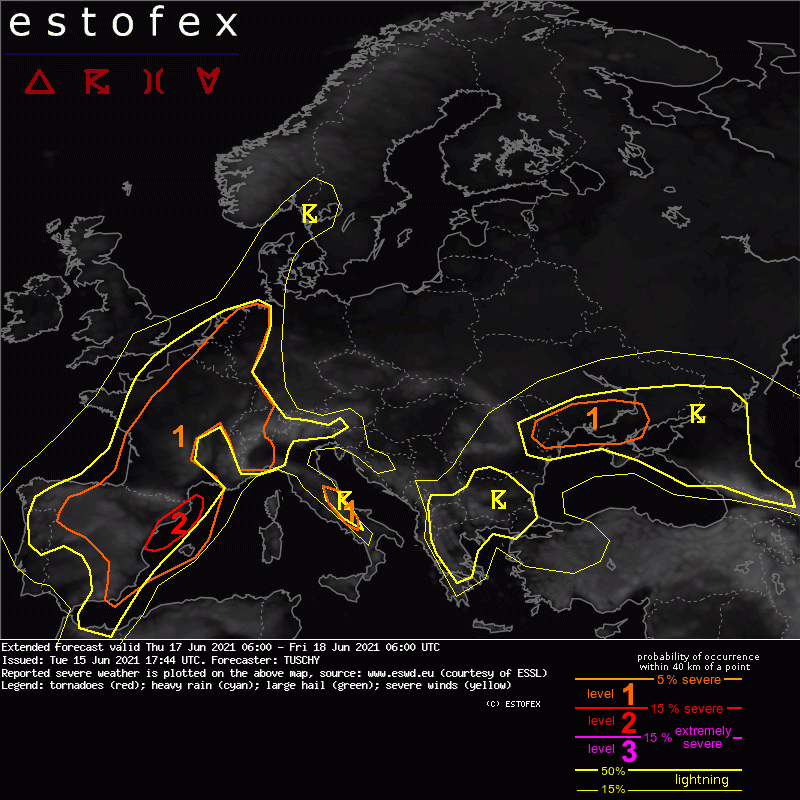 A level 2 was issued across NE Spain because of severe to damaging wind gusts and large hail.

A level 1 surrounds the level 2 with similar hazards but less coverage. In addition, excessive rain and an isolated tornado event is forecast.

A level 1 covers parts of CNTRL Spain to France to Benelux/W-Germany and Switzerland for a hail/heavy rainfall and isolated severe wind gust threat.

A level 1 was issued for parts of CNTRL Italy mainly for hail, heavy rain and isolated severe wind gusts.

A level 1 was issued for parts of the Ukraine into Moldova mainly for isolated tornadoes and heavy rain.

An impressive Rossby-wave train (for this time of year) arrives in the North Atlantic region and adds more dynamic to the evolving pattern. The standing longewave pattern with a deep trough just W of Europe and a building blocking anticyclone over the Baltic States become the dominant features for this forecast period. Geopotential height anomalies within those waves will be impressive compared to the model climatology (negative over Portugal and positive over the Baltic States).
Another interesting feature is a well structured cut-off low over the Black Sea. Some models like GFS hint at a shallow warm core evolution as it crosses the Sea with 1-2 K positive SST anomalies compared to the 81-10 climatology of the CFSR. Neverthelss, NWP guidance is poor for this system.
This cut-off is connected to a broad upper trough over N-Libya.

At the surface, an elongated/wavy boundary stretches from the E-Atlantic to the English Channel and further north towards Scandinavia. A potential convergence zone evolves over France, although details in its position are still unclear and also depend on the convective evolution of the previous day.

Run to run consistency is good. GFS brings the anticyclone over the Baltic states a bit more to the west with not much shift with the W-European trough. The past 3 IFS runs show a similar evolution with the Baltic high pressure but this model keeps the trough axis more to the SW from run to run (now W of Portugal at Friday 00Z and still north of GFS and ICON). The past 3 ICON runs remained stable with all significant features. Overall a nice model performance.
A short wave, crossing E/NE Spain during the forecast period is stable with respect to the progression but stays less amplified with GFS compared to ICON and IFS. All models however converged enough to get a rather homogenous picture regarding its track/strength.

E/SE-erly surface winds blow out of the anticyclone over the Baltic States and converge over France/Benelux/W-Germany with S/SW-erly winds ahead of the long-wave trough. Hence, more focused low tropospheric moisture pooling next to ongoing evapotransipration and advection from the W Mediterranean Sea should result in a broad plume of better/deeper moisture from SW-CNTRL-NE-France to Benelux into W Germany. Additional advection of a subtropical air mass at mid-levels pushes TPWs in the 30-40 mm range.
Aloft, a fanning African EML plume still affects parts of that moisture with regional strengthening possible along/N of the Alpine rim/Vosges and Jura mountains and NE/E of the Apennines and Dinaric Alps.

On the synoptic-scale, low-amplitude waves circle the longwave trough with one wave ejecting out of its base during the day while deamplifying on its way towards France. This feature next to the orography and the frontal boundary serve as foci for CI.

N-Portugal into N/CNTRL-Spain ... should see a lull in thunderstorm activity before noon with re-intensification/new CI thereafter in a low-capped environment on a scattered to widespread scale. Competing storms with limited diabatic heating and probably limited moisture influx from dominant E coast convection should keep MLCAPE in the 500-1000 J/kg range. DLS oscillates between 10-15 m/s, so isolated hail and heavy rain should dominate as threat, although forecast soundings also reveal a wet downburst potential towards the Iberian Plateau (drier mid-levels/ mixed low-levels and rather moist).

E Spain to the Balearic Islands into the Gulf of Lyon ... Rich moisture advects ashore from the W-Mediterranean, wich pushes MLCAPE in the 0.8 to 1.5 kJ/kg range. 15-20 m/s DLS with a mixture of straight and curved hodographs up to 4km (SRH around 150-300 m^2/s^2, dependant on the strength/curvature of the short wave) indicate a risk of organized multicells/supercells with large hail and severe wind gusts (0-3km shear in excess of 20 m/s, ICON up to 25 m/s). Upscale growth into a progressive MCS event with swaths of damaging wind gusts is possible, which could also effect the Gulf of Lyon during the night. Large uncertainties exist how far E this activity grows into the stronger capped CAPE plume so only the level 1 with low lightning probabilities were expanded far E. An isolated tornado is possible along the E/NE coast of Spain.
A confined level 2 was added with growing model consensus mainly for a widespread severe wind gust threat and large hail.

W-CNTRL France ... will see a broad plume of 500 to 1000 J/kg MLCAPE with higher peaks on a local scale with substantially lower values towards N/SE France. Straight hodographs and 15 m/s DLS are supportive for multicells and an isolated splitting supercell event. Large hail and strong to severe wind gusts dominate at the beginning with a rainfall/wind risk later on after clustering. Especially SW France will see effective moisture flux convergence with a strengthening 900-850 hPa wind field during the late afternoon/evening hours which increases the risk of excessive rainfall. The thunderstorm coverage will be scattered to widespread.

Benelux to SW-Germany and Switzerland ... will see a patchy but rather strong CAPE build-up during the day with a sharp gradient to the E due to the dry E-erly winds from the Baltic anticyclone. CI should be tied to the orography over SW Germany into Switzerland and the broad/weak confluence zone with gradually decreasing thickness atop. Timing of CI is tough with nearly absent QG forcing, but at least isolated CI should occur with weakening CIN and grazing short waves. Over the W-Alps, thick mid-level CAPE profiles (peaks around 2000 J/kg) and DLS in the 5 m/s range should support pulsating/intense updrafts with large hail and excessive (flash flood producing) rain - even temporal clustering is possible with a localized severe wind gust/downburst threat, which spreads N during the night towards SW/W Germany/Luxembourg.

Further north towards Benelux, CI is uncertain during the day with increasing probabilities during the afternoon/evening (peak heating). NWP guidance still diverges substantially with the exact height geometry/wind field which offers still variable CAPE/shear maxima at different places. Hence right now a general 15 m/s DLS is forecast with little large-scale forcing. Heating should support numerous thunderstorms, which affect Benelux into far W/NW Germany. Shear/CAPE space would support multicells/isolated transient supercells with hail/severe wind gusts, but confidence in any area with a maximized severe risk is still low. Only a broad brushed level 1 was added for now, where all models show adequate CAPE/shear. Modifications may be needed in later outlooks.

A lot depends on the final strength and track of this broad and potential strong cyclonic vortex. In case it indeed evolves into a shallow warm-core feature (with GFS gradually backing off of this idea in the past few runs), a robust ageostrophic LL wind response would cause enhanced LL speed/direcional shear over a broad area. LCLs around 500 m and lots of streamwise vorticity for right moving thunderstorms would imply an isolated tornado risk. Impressive lift however would make discrete CI more difficult with a more stratiform rain event with embedded convection becoming more likely betimes. A weaker vortex would favor the rainfall threat with slow moving cells. A level 1 was issued, where most model agree with best LL shear/CAPE overlap.

... Alpine areas: From the Alps to the Balkan/Rhodope Mountains...

Diurnal driven convection with weak shear and a moist troposphere poses a localized hail and heavy rainfall risk, especially for the mountains over SE Europe.
DLS in the 10-15 m/s range along the S Alps may result in a few multicell events with hail and probably a few severe wet downbursts events (dry air at 500 hPa with 500-1000 J/kg MLCAPE and TPWs aoa 30 mm). Confined level 1 areas may be needed in later outlooks. The only level 1 upgrade was already performed over CNTRL Italy, where up to 2000 J/kg MLCAPE and 10-15 m/s DLS points to a hail and localized severe wind gust threat (including heavy rain).