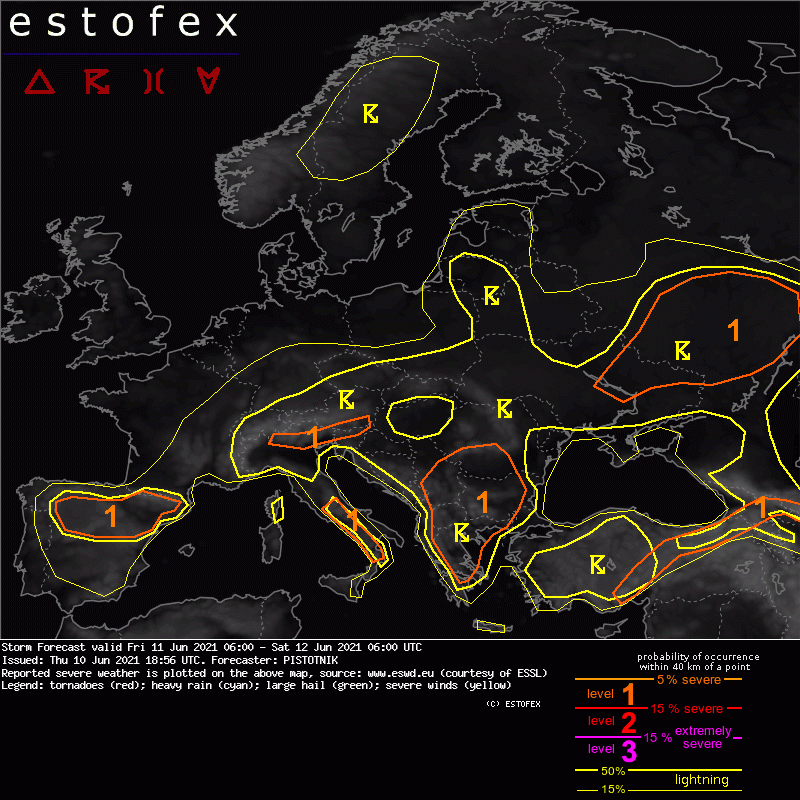 A level 1 is issued from SE Turkey to Georgia and Armenia mainly for severe convective wind gusts and large hail.

A level 1 is issued for parts of Russia and the Ukraine mainly for excessive convective precipitation.

Level 1 areas are issued for the S Balkans, the southern Alpine region, and S Italy for excessive convective precipitation and large hail.

A level 1 is issued for parts of Spain for large hail, severe convective wind gusts and excessive convective precipitation.

Most of Europe is under weak pressure and temperature gradients and a pretty seasonable temperature level. Rather low 500 hPa geopotential with countless small, slowly and erratically drifting mid-level lows stretches in a triangle between the Baltic States, NW Turkey and Iberia. Closer to the surface, a slowly filling cyclone over the Ukraine is the only synoptic feature. In contrast, anticyclonic influence extends from the Bay of Biscay towards Germany and loosely connects with another faint anticyclone over NW Russia. This configuration results in weak northerly flow over most of Europe.
Somewhat stronger westerly mid-level flow is confined to a belt from the Maghreb States to the Near East beneath a moderately strong subtropical jet, and to the British Isles at the flank of a big cyclone near Iceland.

Unstable air with a few hundred J/kg overlaps with the fringes of the subtropical jet stream, creating deep-layer shear around 15 m/s with less conspicuous shear values across lower levels. Like usual at this time of the year, strong mixing of low-level moisture is the biggest concern in the high and dry inland areas, whereas some enhanced moisture could stay in place in the lowlands of SE Turkey, Georgia and Armenia, and generally in the coastal belts, where it will be strongly capped, though.
A short-wave trough creates some lift especially across the SE half of Turkey on Friday, that will likely moisten the mid-troposphere a bit and raise the chances for convective developments to some degrees. Nonetheless, storms in the interior may still be quite high-based or even confined to altocumulus levels. This leaves the severe weather risk rather low apart from the possibility of a few evaporation-driven downbursts. Those storms that manage to ingest better moisture can organize mainly into multicells and can produce moderately large hail. The peak of scattered activity is expected in the afternoon, though synoptic lift may support secondary initiation at outflow boundaries well into the evening.

Scattered to widespread, mostly daytime driven afternoon storms are expected in a moist but otherwise quiescent environment with CAPE up to 1000 J/kg and very weak vertical wind shear. The main risk is heavy to excessive rain, while the lack of steeper lapse rates and vertical shear keeps the hail and wind risk low. One or two non-supercellular tornadoes are not ruled out. Since no pronounced convergence zones can be seen and the precipitation signals in the forecast models show limited coherence, a broad level 1 seems to be the best solution.

Bottom-up CAPE development in the weak northerly flow over continental Europe is sluggish at first, but after a longer trajectory over land and passing the "master's exam" of crossing one of the mountain ranges (Pyrenees, Alps, Dinaric Mountains, Carpathians, ...), the airmass finally features steep enough lapse rates to allow CAPE on the order of 500 to 1000 J/kg. Scattered single- to multicellular storms are expected mainly in the afternoon. A few marginally large hail events are possible especially on the downwind (southern) side of these mountains, where opposed upvalley and upslope circulations may push deep-layer shear shyly above 10 m/s. Otherwise, isolated heavy rain is the main risk, but the expected wide scatter of events should not surpass our level 1 category.
The inland areas of Spain, where subcloud layers are deeper and drier, can experience a few evaporation-driven severe downbursts.

While convection will be strictly tied to land everywhere else, a few thundery showers may propoagate offshore in the course of the night beneath a small cold drop at mid-levels. One or two waterspouts are not ruled out in this case.

A cold front and a pronounced vorticity maximum cross this area overnight from the west. The strong forcing may suffice to create neutral to marginally unstable profiles. Despite the linear lift and enhanced vertical wind shear, the late timing and low cloud tops should keep the wind risk below our level 1 thresholds.