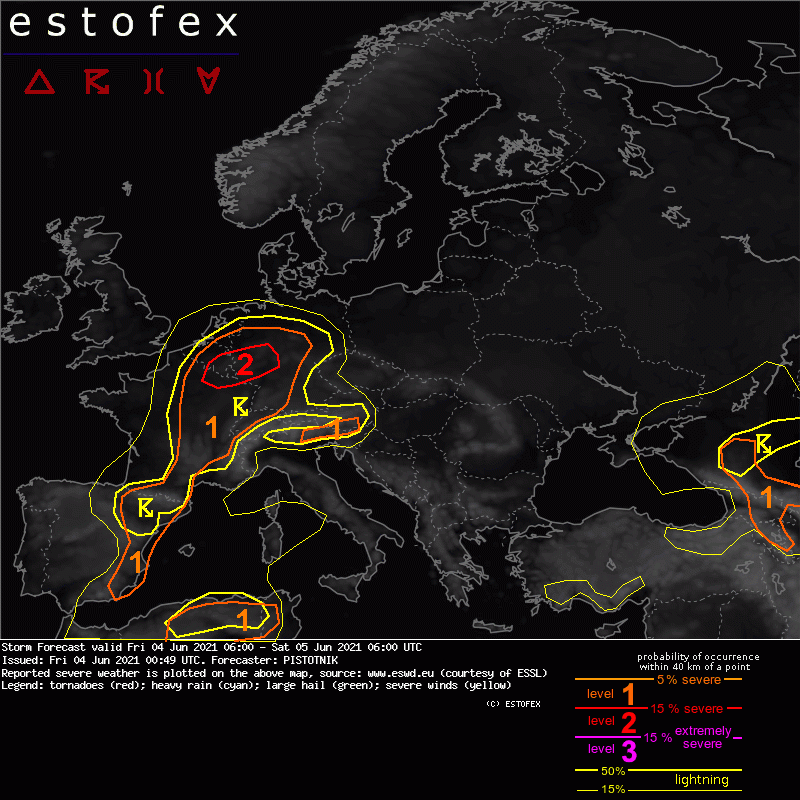 A level 1 and level 2 are issued for parts of BeNeLux, Germany, France and the Alpine region mainly for excessive convective precipitation and to a lesser degree for large hail and severe convective wind gusts.

A level 1 is issued for parts of Spain, Algeria and Tunisia mainly for large hail and severe convective wind gusts.

A level is issued for parts of Armenia, Georgia and far-SW Russia mainly for large hail and severe convective wind gusts.

Countless small mid-level lows and troughs with slow, erratic motions are distributed across Europe, primarily in a triangle between S Scandinavia, SW Russia and Turkey, and in form of a fragile long-wave trough from Iceland to S France to Portugal. They are opposed a weakening (formerly blocking) anticyclone over NW Russia and a broad, diffuse mid-level ridge over central Europe. Stronger mid-level flow and dynamics are confined to the forward flank of the trough's tips in the W Mediterranean region and the Near East.
At the surface, pressure gradients are - apart from two cyclones over the Black Sea and SW Russia - very weak. The situation is largely barotropic, i.e., the regions under higher 500 hPa geopotential are also placed under warmer (and moister) air, and vice versa.

The warm airmass is characterized by weak lapse rates but plentiful low-level moisture. Over France, BeNeLux and Germany, 2m dewpoints often between 15 and 18C allow the buildup of 500-1500 J/kg CAPE after some hours of daytime heating. Less moisture in the Alpine region keeps CAPE somewhat lower, mostly on the order of 500 J/kg. A few storms may be left over from the previous day or already form in the morning, before quite widespread storms pop up in the afternoon and evening.
Towards the east (Netherlands, most of Germany and the Alpine region), vertical wind shear is weak and the synoptic situation is still rather quiescent, hence mesoscale features like outflow boundaries, insolation gradients and the orography dictate where and when convective initiation happens. The main risk is excessive convective precipitation. The strongest pulse storms near the Alpine rims might also produce marginally large hail or large amounts of small hail, in case the mountains manage to steepen the lapse rates and create a little vertical wind shear by upvalley and upslope circulations. Higher mountains (>2000m) will stay largely devoid of deep convection due to the still abundant snow cover, though.
Further west into Belgium, Luxemburg, far-west Germany and most of France, both deep-layer shear (10-15 m/s) and synoptic lift increase ahead of the long-wave trough. Some storms may therefore organize into multicells or grow into several large clusters. While excessive rain is still the main risk, a few marginally large hail events (with stronger, discrete updrafts) or cold-pool driven severe wind gusts (at the leading edge of storm clusters) are not ruled out in addition. Even though the model pool does not agree on obvious convergence zones, the overlap of CAPE > 1000 J/kg, synoptic lift and abundant precipitation signals appears robust enough to upgrade parts of France, Belgium and far-west Germany to a level 2.
Convection will gradually become elevated and weaken overnight, while it continues to move NE-ward with the lift ahead of the trough.

Steep lapse rates from the Spanish interior and the Sahara desert spread NE-ward with the increasing mid-level flow. While low-level moisture is mixed out in the inland areas, it can accumulate beneath the capping inversion in lowlands and coastal areas. The resulting CAPE may locally reach up to 2000 J/kg in N Algeria and N Tunisia, where it overlaps with 15-20 m/s deep-layer shear and is capped by synoptic subsidence. In the E half of Spain, CAPE will likely be confined to some hundred J/Kg, while deep-layer shear even reaches up to 30 m/s and an approaching vorticity maximum provides strong synoptic lift.
Long and straight hodographs indicate that well-organized storms, including (splitting) supercells, would be the dominant convective mode and could easily produce large to isolated very large hail and severe wind gusts. Most likely initiation sites are the pronounced drylines / sea breeze fronts, or in general mountains that can maintain an access to neighboring moisture reservoirs against the strong mixing processes.
However, there are indications that storms (at least surface-based ones) will remain rather isolated or scattered at best. The limiting factor in Spain is the rather low amount of buoyancy in the towering cumulus layer, which may result in forming updrafts becoming sheared apart too easily. In N Algeria and N Tunisia, buoyancy and shear seem more favorably balanced, but much CIN and the lack of synoptic lift imply that the cap might not break at all. Best chances are in NE Algeria in the late afternoon. These uncertainties preclude a level 2 despite the high conditional probability of any surface-based storm that forms to become severe.
Convection will quickly become elevated in coastal and offshore areas and does not pose a severe weather risk anymore, but may move as far as Corsica and Sardegna overnight.

Strong SW-erly mid-level flow is also present ahead of the eastern area of lowered 500 hPa geopotential. It advects hot and dry air with very steep lapse rates from the Anatolian Plateau towards the Caspian Sea. Thursday's surface observations indicated that some low-level moisture with 2m dewpoints of 12-16C could be maintained in the lowlands of E Georgia, Armenia and the Russian Caucasus forelands, and satellite imagery suggested some organized but struggling afternoon storms in this "loaded gun" environment.
A similar setup with patches of some hundred J/kg CAPE under strong, unidirectional 0-6 km shear in excess of 20 m/s is in place again on Friday. Storm coverage will likely remain low, and convection will struggle a lot to detach from its initiation sites at drylines NE of the mountains. In case it succeeds, large hail and severe wind gusts are likely. A level 1 with a low probability lightning area covers that conditional risk.