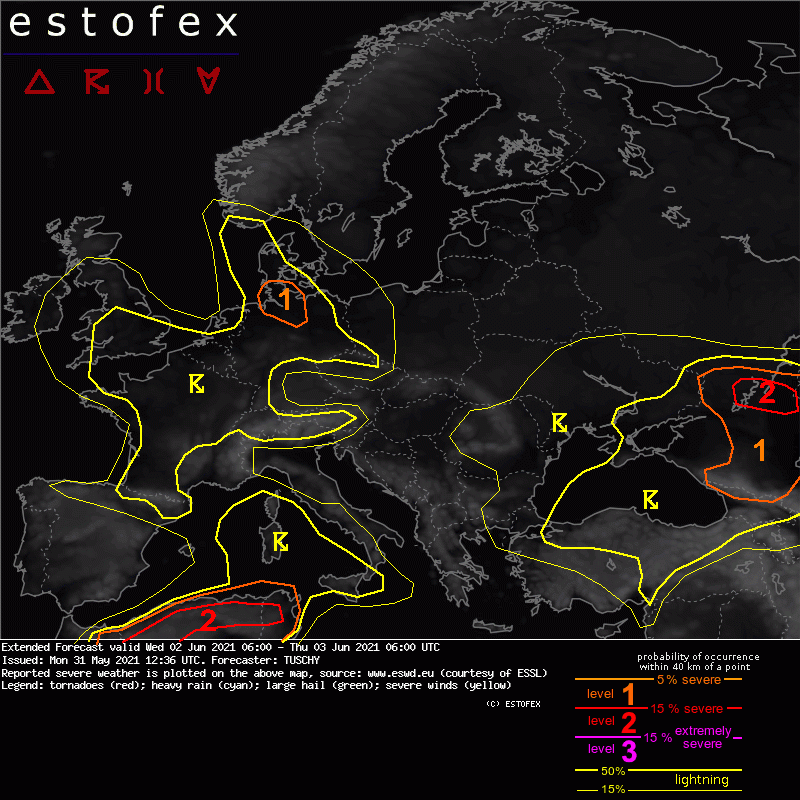 A level 2 was issued across NE Algeria into NW Tunisia mainly for large to very large hail and severe wind gusts.

A level 2 was issued across parts of S Russia mainly for excessive rain.

Both level 2 areas are surrounded by level 1s with a similar hazard but lower coverage. In addition, the level 1 over S Russia also includes isolated hail and severe wind gusts.

A level 1 was issued for N Germany mainly for large hail, severe wind gusts, heavy to excessive rain and an isolated tornado threat.

Ongoing split flow regime (forced by a strong Scandinavian blocking anticyclone) with two dominant branches (one bending north towards the Norwegian/Barents Sea and one affecting N Africa /Turkey) affects Europe on that day. Numerous cut-off lows whirl around - one from Denmark towards S Norway, another one over SE Europe and a potential third one west of the Bay of Biscay (with ongoing numerical discrepancies about the constriction process).

At 500 hPa, a dominant warm anticyclone sits over Scandinavia with warm conditions and a stout positive anomaly (500 hPa, geopotential) bias compared to the numerical climatology. The same for a robust subtropical ridge over N-Africa. In-between, weak pressure and height field gradients exist.

Two wavy frontal boundaries frame Europe with the western one over far W/NE Europe probably yielding a prefrontal convergence zone somewhere over CNTRL/NE France. However following model data will give more insight in the exact placement of those synoptic-scale fronts and mesoscale convergence zones.

IFS/ICON both agree in rich BL moisture within a broad low-tropospheric confluent flow regime, which affects most of the W Mediterranean. A short wave passes just to the north of our area of interest and crosses Sardegna around noon and approaching S Italy during the overnight hours. Geopotential heights increase somewhat upstream with a strengthening subtropical ridge building north.

That passing wave, including lowering thickness should all help to spark numerous thunderstorms along the E Tell Atlas and Aures mountains with peak activity during the afternoon/evening hours. 1.5 to 2.5 kJ/kg MLCAPE (effective) and strengthening mid-level flow (yielding 15-20 m/s DLS) with rather straight hodographs favor organized convection including multicells/supercells with large to very large hail and severe wind gusts. Local flash flood issues are also possible. With all models supporting CI and with COSMO 5km indicating a growing cluster in this area, a confined level 2 was added.

A deepening low moves from the Normandy towards Ireland. Ahead of this feature, falling surface pressure overspreads a broad area with a gradual structuring of a zonally aligned low tropospheric low pressure channel over CNTRL/NE France into SW Germany. Also, the wavy frontal boundary over W France pushes east a bit, so CAA occurs over W France although only on a temporal scale. Geopotential heights aloft increase during the day but mid troposphere remains cool enough for some CAPE-build up (although decrease to the S in response to this thickness increase is noted).

WAA and LL convergence cause scattered to widespread CI with weak CIN. 400-800 J/kg MLCAPE (locally aorund 1 kJ/kg) and 5-10 m/s DLS favor pulsating/clustering convection with slow forward propagation. 6 to 10km flow increases towards Germany which could increase upper ventiallation a bit (somewhat better updraft/precipitation displacement). Could see a few mesoscale clusters emerge out of this pattern which gradually decay during the night. Heavy rain and local hail with strong downbursts will be the main hazard. No level 1 was yet issued due to model uncertainties regarding best CAPE and strongest LL convergence.

NW-ward departing cold-core low yields a broad but also deep confluent flow regime over N Germany. ICON has currently the southern most track with GFS/IFS favoring a faster and notherly solution so lingering uncertainties exist for this setup.
Modest BL moisture beneath 7K/km lapse rates at mid-levels cause widespread 400-800 J/kg MLCAPE with regional peaks up to 1kJ/kg. Weak capping is in place, but diurnal heating and LL forcing should support scattered to widespread CI. ICON 00Z currently has the most violent setup with large/curved hodographs, offering plentiful SRH for rotating updrafts, including large hail and severe wind gusts. In addition, despite a weak LL inversion, any better diurnal heating could modify the LL thermal profile to support a tornado risk. In addition with enhanced 850 hPa flow, strong moisture advection also poses a risk for back-building convection with excessive rainfall.
IFS indicates a more separated shear/CAPE field but still shows a spatio-temporal overlap for all ingredients.

Due to ongoing uncertainties, a broad level 1 area was added for now and modifications to this level area seem likely. (e.g. ICON 06Z now came in much later with CI with mainly elevated convection offshore/over Denmark). The level 1 was also broadened to the SE to reflect an uptick in convection in case of a more northerly track of the cut-off low.

Some models like IFS hint at a loosely organized cluster evolving along the Ore Mountains with a slow motion to the NW. Locally heavy rain and hail would be the main hazard - currently not enough for a level area.

... Southern Russia between the Sea of Azov and the Caspian Sea ...

An extensive cyclonic vortex over far SE Europe establishes a moist/broad warm sector over the area of interest. Rather poor mid-level lapse rates and DLS around 10 m/s keep the severe risk on the more isolated scale with hail and strong downbursts.
The main focus will be a broad/deep confluent flow regime in the level 2 area, where training/back-building convection results in an overnight cluster with excessive rainfall amounts (12h until 06Z 50-150 l/qm in current model guidance). Flash flooding becomes a growing concern due to the excellent inflow trajectories from the warm Caspian Sea (SST with neutral to slightly positive values compared to the 81-10 climatology). Due to good intra model guidance, a level 2 was already issued.