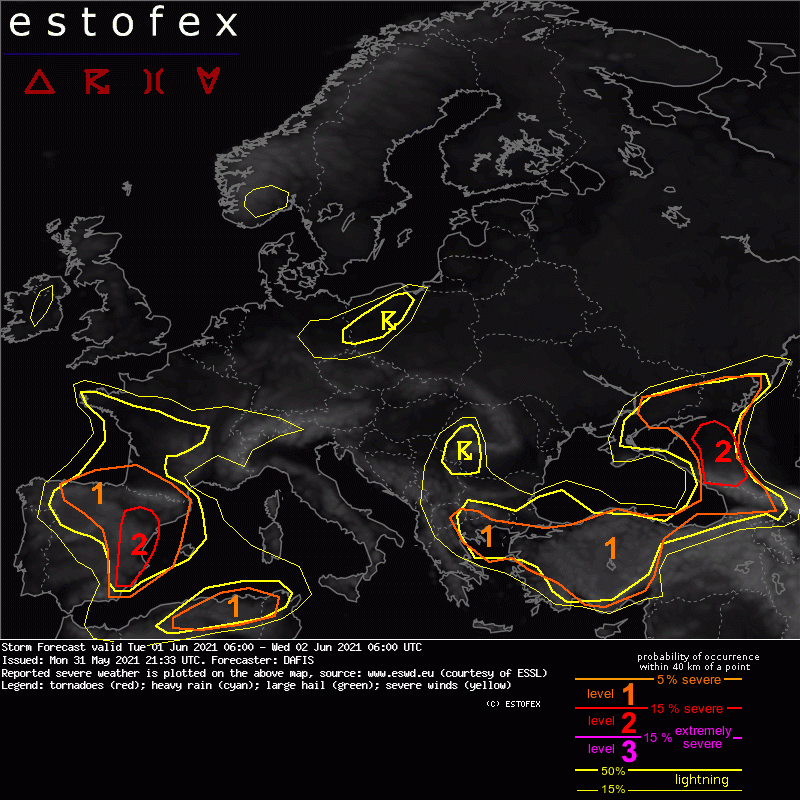 A level 2 has been issued for parts of Spain for large hail and excessive precipitation.

A level 2 has been issued for parts of W Russia and Georgia for large hail, excessive precipitation, and severe wind gusts.

A level 1 has been issued for Spain and S France for large hail and excessive precipitation.

A level 1 has been issued for part of the Balkans, Turkey, Armenia, Georgia, and W Russia for large hail, severe convective wind gusts and excessive precipitation.

A level 1 has been issued for parts of Algeria and Tunisia mainly for large hail.

The long-wave trough over eastern Europe is about to split into two main vorticity maxima under the influence of the blocking high in Scandinavia. Two cut-off lows will be formed, one over the Balkans and another one over the Baltic States will travel fast west. Both will be associated with DMC events.

Another diminishing cut-off low west from Iberia will continue to destabilize the environment in Spain and SW France where severe weather events are expected. In addition, a very warm and moist low-level air mass is found in the western Mediterranean and NW Africa, where a strong overlap of CAPE and shear is forecast.

At the surface, apart from the high-pressure system over Scandinavia, the most interesting feature is the low-pressure system over the Black Sea and Ukraine. East of that, a stationary front has formed which will serve as a lifting mechanism for highly unstable air masses.

Synoptic-scale lifting of unstable air masses is expected over the Iberia, downstream a cold mid-level drop that moves slowly east. MLCAPE up to 2000 J/Kg will overlap with 15-20 m/s in Spain, after the morning cap. In addition to qg-forcing, diurnal heating will also be strong, also serving as a lifting mechanism. Steep low/mid-level lapse rates and high LCLs suggest that storms will be able to produce large hail.
Regarding storm mode and organization, a few MCSs are expected inside the strongly sheared environment, but supercells will be hard to form given the low values of SREH. Nevertheless, isolated storms will be able to produce large hail and severe wind gusts in Spain, and the main threat from MCSs will be excessive precipitation (in Spain and France).
During the night storm activity will continue only over the Balearic Sea.

A pool of very moist air masses is found east from the Black Sea where a rather weak short-wave trough is about to cross parts of Russia and Georgia. The S-SWerly flow that has been established east of the low-pressure system over Ukraine results in WAA and an elevated mixed layer extending from Turkey. The very steep mid-level lapse rates and unstable surface air masses will create up to 2500 J/kg MUCAPE according to GFS. Moreover, DLS will range between 10 and 20 m/s with up to 200 m2/s2 SREH0-3km. Supercells are well possible, able to produce all kinds of severe weather, mainly large hail. Storm activity will weaken during the night but most probably will continue overnight until the early morning on Wed 02/06.

A complex setup of low CAPE and high shear is expected over this part of the continent. Low-level air masses are rather dry away from the coasts, and despite the steep mid-level lapse rates, CAPE will be limited. The few scattered storms that will manage to form will be able to produce hail, with better chances for large hail mostly in Turkey. Also, a few waterspouts in North Aegean and Black Seas cannot be ruled out.

This area is placed below a belt of a mid-level jet stream which overlaps with moist and warm low-level air masses. CIN is quite important close to the coasts, so better chances for CI exist over the mountains. Storms will be able to organize fast into multicells and produce large hail, excessive precipitation and severe wind gusts until the late afternoon on Tue 01/06.