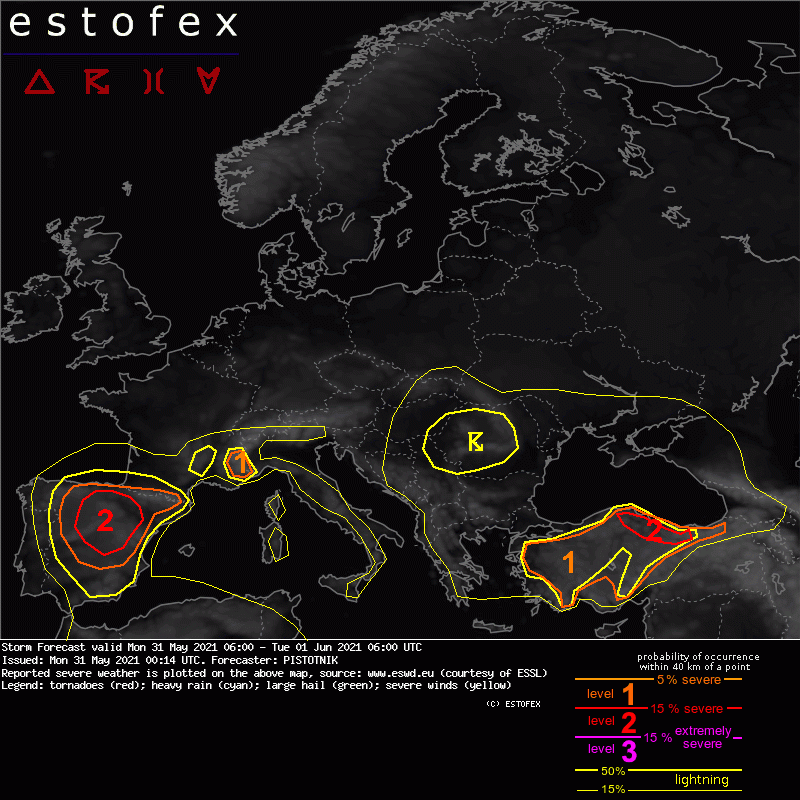 A level 1 and level 2 is issued for large parts of Spain for large hail, severe convective wind gusts and excessive convective precipitation.

A level 1 and level 2 is issued for NE Turkey for large hail, severe convective wind gusts and excessive convective precipitation.

A level 1 is issued for W and central Turkey for large hail and excessive convective precipitation.

A level 1 is issued for SE France mainly for large hail.

A blocking anticyclone is situated over Scandinavia. It is surrounded by three small cut-off level lows between Slovakia and Bulgaria, over Finland (moving to the Baltic states) and W of Portugal (approaching the country). Near the surface, pressure gradients are weak. Cool and rather dry continental air from the NE is still advected into much of continental Europe.
A moderate, meandering zonal mid-level jet overspreads the Mediterranean region, Turkey and the Near East. It also overlaps with very warm to hot air with steep lapse rates and an enhanced convective potential ahead of the two southern cut-off lows. These areas are discussed below.

Both regions with the highest severe thunderstorm potential feature pretty similar setups and processes: Warm air advection is in place ahead of the cut-off lows, an elevated mixed layer (EML) from the SW overspreads the regions of interest, moderate CAPE (usually on the order of 500 to 1000 J/kg) builds where this EML moves on top of rich low-level moisture, and the SW-erly mid-level winds are strong enough to provide at least moderate vertical wind shear (15-20 m/s bulk shear across the 0-6 km layer).
Scattered storms are expected to initiate from early afternoon onwards. Both regions can be divided into three characteristic subregions:
(1) Over high and dry terrain far inland, vertical mixing is very strong, and deep "inverted V" profiles with limited CAPE and vertical wind shear develop. Storms under such conditions are high-based, rather poorly organized and their severe weather risk is low, apart from a possibility of strong to severe outflow winds.
(2) The best chances for storm initiation and organization exist along drylines NE of mountains chains, where thermally driven upvalley/upslope flow converges with the SW-erly mid-level background winds. Vertical mixing is suppressed when the EML is advected on top of the upvalley/upslope flow regimes, hence both CAPE and vertical wind shear are maximized in these belts. Storms developing at drylines and then moving into the upvalley flow regimes can organize into multi- and supercells with a primary risk of large (to isolated very large) hail in early stages and severe wind gusts and excessive rain later on, especially in case upscale growth can take place (more likely in Spain than in Turkey). Mountains of particular interest are the Iberian System, the Central System and the Cantabrian Range in Spain, and the hinterland between Samsun and Trabzon in Turkey.
(3) In coastal areas, the boundary layer is too strongly capped at this time of the year, and storms moving there will quickly become elevated, weaken and decay. The capping will likely also be too strong in the SW parts of Portugal and Spain, in the lower Ebro Valley in Catalonia, and in the lowlands of Georgia and SW Russia.

Storms will mostly weaken around or after sunset. However, increasing synoptic lift can keep them alive or spark new convection across large parts of Spain all night long. Apart from a slightly enhanced risk of heavy to excessive rain, severe weather appears unlikely then.

Some patches of CAPE develop where moist upslope flow is exposed to enough daytime heating. Isolated to scattered afternoon storms are possible over prominent and high enough mountains, though they will struggle a lot against the capping inversion and entrainment of dry environmental air in the absence of noteworthy synoptic lift. Deep-layer shear increases from 15 m/s in S France to 25 m/s in S Italy, hence persistent updrafts can turn supercellular and produce large hail. A small level 1 is issued for the Alpes Maritimes in France, where the signals for convective initiation are most convincing. Otherwise, only low probability thunder areas are issued, but a careful monitoring of any storm that forms is recommended.

... thunderstorm areas between the Ukraine, Hungary, the Balkans, W and central Turkey ...

Moist and slightly unstable air is in place under and around the southeastern cut-off low. Scattered, partly daytime-driven and partly synoptically-driven thunderstorms are expected across wide areas. Weak vertical wind shear and rather low cloud tops keep the severe weather risk low, though a few isolated marginally severe hail and rain events cannot be discarded.
Over Turkey, deep-layer shear increases to around 15 m/s at the forward flank of the cut-off low. Though the models disagree on the amount and depth of instability (barely enough according to GFS versus more according to ECMWF and ICON), the combined hail and rain risk with multicellular and/or clustering storms appears high enough for a low-end level 1.