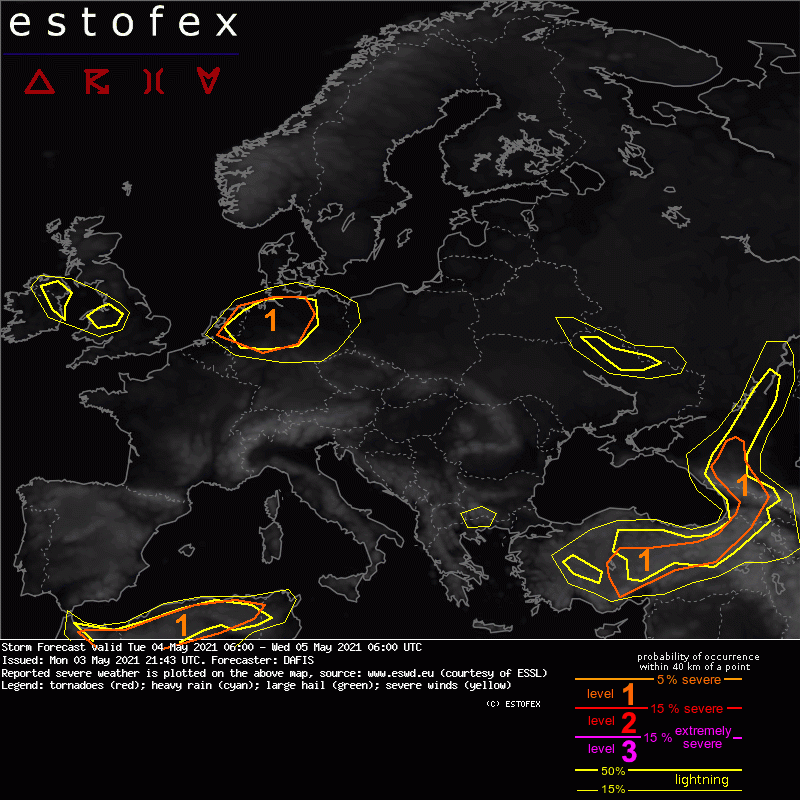 A level 1 has been issued for parts of Germany, the Netherlands and NE Belgium mainly for severe convective wind gusts.

A level 1 has been issued for NE Morocco, N Algeria and NW Tunisia for large hail and severe convective wind gusts.

A level 1 has been issued for parts of Turkey, Georgia and SW Russia for large hail and severe convective wind gusts.

The unseasonably north extension of the subtropical jet stream over southern Europe continues to affect the Mediterranean and the Middle East, bringing very warm air masses from Africa. At the same time, two major troughs can be found in the analysis maps in northern Europe where low-level moisture is rather limited, but the overlap of high shear and low CAPE creates favorable conditions for a few intense storms on Tue 04/05. More favorable conditions for DMC events will be found in NW Africa and the Middle East, where unstable air masses below jet streams create a volatile environment, conducive to severe thunderstorms. Finally, a secondary short-wave trough will also affect parts of S Bulgaria and North Greece with small chances for CI, and another short-wave trough will cross parts of Ukraine and SE Belarus, also with small chances for organized convective events.

In the wake of a deep low-pressure system in the North Sea below a fast-moving short-wave trough, the advection of an unstable air mass will create a few hundreds of CAPE and a few storms are expected after 09z on Tue 04/05. Moreover, the development of a mid-level jet streak will increase DLS to values greater than 20 m/s, with comparable wind speeds at 850 hPa. Any convective cell that will succeed to develop into this highly sheared environment will be able to produce very strong to severe wind gusts. Convective activity should totally stop in the late afternoon.

Diurnally-driven convective activity is expected in this part of Africa which may become severe under the influence of a mid-level jet stream, downstream of a diminishing short-wave trough with a center over the Iberian Peninsula. Storms will be able to organize in multicells and a few supercells cannot be ruled out. Large hail and severe convective wind gusts will be the main threats. In the evening, any surviving storms will be mostly elevated and the severe threat will be significantly reduced.

Also in this area of interest, thunderstorms will be mostly driven by diurnal heating and will be able to organize into severe storms. Steep low/mid-level lapse rates and DLS stronger than 15 m/s increase the large hail threat, as well as the severe convective wind gusts. Most NWP models show that CI in southern Turkey will be limited and mostly confined in the mountains, but this is the region with the steepest lapse rates, thus large hail threat is maximized. A few elevated storms in the easternmost parts of the level-1 threat area may continue during the evening and late-night but should remain non-severe.