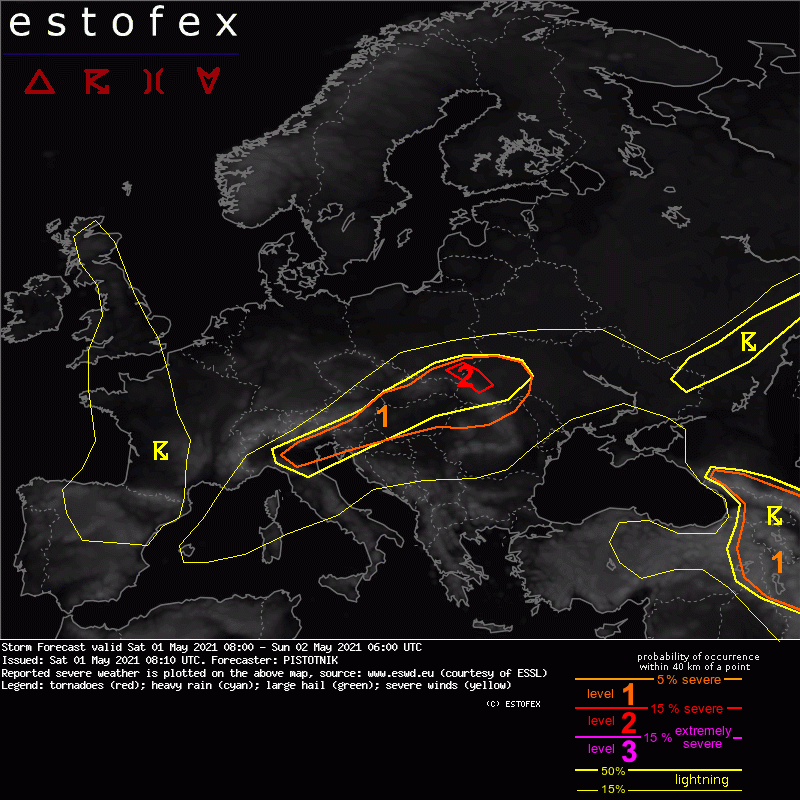 A level 1 and level 2 are issued for a belt from N Italy to the Ukraine mainly for large hail and excessive convective precipitation.

A level 1 is issued for E Turkey, Armenia, Georgia and around for large hail, excessive convective precipitation and severe convective wind gusts.

A fairly pronounced "high index" pattern has established. Low geopotential and unseasonably cold air cover N Europe. A mid-level trough with cool maritime air also extends over the British Isles, BeNeLux and France. Ahead of it, moderate to strong SW flow transports very warm subtropic air to Italy and SE Europe. Along the wavy frontal boundary that separates these two strongly contrasting air masses, a surface cyclone will quickly develop over the W Mediterranean on Saturday. Until Sunday 06 UTC, it is predicted to move across the Alps to Slovakia and deepen below 1000 hPa.
Some organized thunderstorm activity is possible in the warm air mass ahead of this frontal boundary.

An elevated mixed layer (EML) from the Sahara with steep lapse rates is advected northeastward. Its fringes spread as far as Hungary and the Ukraine and overspread decent low-level moisture, though this moisture may be more shallow, and therefore more vulnerable to mixing processes, than the forecast models predict at this time of the year. While the model pool forecasts widespread CAPE up to 1000 J/kg and even maxima up to 2000 J/kg in the Danube plains of Bulgaria and Romania, expected CAPE will be lower (probably mostly below 500 J/kg) and more patchy than the forecast maps suggest. Nonetheless, it suffices to support storm - if the fairly strong cap can be broken.
There are mainly three areas where synoptic lift (intense warm air advection plus some travelling short-wave troughs) and the occasional help of orography can create scattered storms:
(1) SE Poland to the W and central Ukraine (discussed below),
(2) N Italy (supported by upslope flow), and
(3) in a belt from Slovenia and N Croatia to Slovakia.

An overlap of low to moderate CAPE with fairly strong vertical wind shear (0-6 km bulk shear ~20 m/s) and veering profiles (0-3 km storm-relativ helicity on the order of 100-300 m^2/^2) is adequate for multi- and supercells with some 2-4 cm sized hail events. However, convective initiation will happen rather late (after 15 UTC) or may in some regions even fail against the strong cap established by the EML. The time frame for surface-based storms is limited. The bulk of the activity will likely shift into the evening and night, when synoptic lift further increases ahead of the deepening central European cyclone. By then, the severe weather risk is lower and partly shifts from large hail to excessive rain in case of upscale growth or repeated rounds of storms. Due to these remaining uncertainties, a large level 1 seems to be the best solution for now.
A small area of special concern develops from SE Poland to the far-west Ukraine, where a convergence (dryline) between dynamic downslope winds from the Carpathian mountains and thermally driven plain- to mountain flow develops. Convection-resolving models agree on a few discrete, strong and right-moving supercells already in the afternoon in this confined region. This scenario is realistic enough to warrant an upgrade to a level 2.
A particularly close nowcasting and monitoring of low-level moisture is recommended in the entire risk level area. Roughly speaking, a 2m dewpoint above 12C should be in place in order to support surface-based afternoon storms with a particularly high hail risk.

Another round of daytime-driven thunderstorms forms in an environment of up to 1000 J/kg CAPE, weak vertical wind shear and quiescent synoptic conditions. The strongest pulse storms may bring isolated large hail, downbursts or heavy rain. An expected wide scatter of rather few, marginally severe events is covered with a broad but low-end level 1 area.