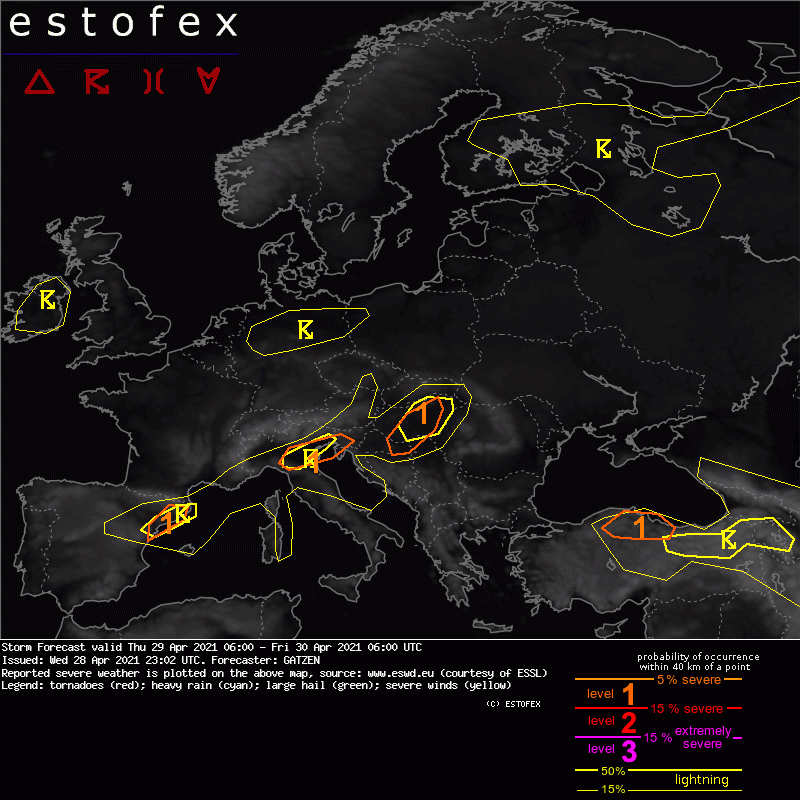 A level 1 was issued across north-eastern Spain mainly for large hail.

A level 1 was issued across northern Italy mainly for large hail.

A level 1 was issued across Hungary mainly for large hail.

A level 1 was issued across northern Turkey mainly for large hail.

At the flank of low geopotential extending from Scandinavia towards the British Isles, a south-westerly mid-level flow has developed over southern and Central Europe. Embedded vort-maxima travel across the Mediterranean. At the cyclonically sheared flank of the mid-level jet, intense troughs affect the British Isles and northern Germany. Cold and unstable air masses are present across northern Europe.

A moist maritime air mass advects onshore with south-westerly winds. Lapse rates are rather poor, and with some diurnal heating, weak MLCAPE will develop. Some deeper CAPE is expected with the passage of mid-level vort-maxima and equilibrium level temperature will slightly drop to below -20 degree C. Storms are forecast to initiate in these regions, also supported by topographic features. These storms will form in a strongly sheared environment, with deep layer vertical wind shear between 15 and 20 m/s and slightly curved low-level hodographs (0-3 km SRH about 100 m^2/s^2). Storms will be rather well-organized and develop into multi- and supercells, capable of producing large hail. Severe wind gusts are not ruled out, especially along bowing segments of larger storm clusters expected across Hungary later in the day.

At the southern flank of a short-wave trough that progresses across the Black Sea, a strong mid-level flow affects the area. At the same time, strong diurnal heating results in CAPE with rather high LFCs and deep inverted-v profiles. In the eastern parts of the thunder area, the combination of rather strong CIN, high LFC, and strong shear will likely limit the potential of storms. Best potential for intiation is over mountains but storms are expected to weaken or decay in the low lands. Isolated large hail and severe wind gusts are forecast but severe civerage is expected to be rather low so a level 1 is not issed at this time.

Over northern Turkey, lower LFCs, higher MLCAPE and higher moisture indicate a greater potential for some longer-living storms. Given the high deep-layer shear around 20 m/s, supercells are possible capable of producing large hail.

Some showers and thunderstorms are forecast with the passage of an intense trough. MLCAPE is forecast to be weak, and storms are not expected to be severe. However, given the strong shear at low-levels, isolated mesocyclones and/or bowing segments are not ruled out, caoable of producing severe wind gusts and tornadoes. The overall risk is expected to be low.