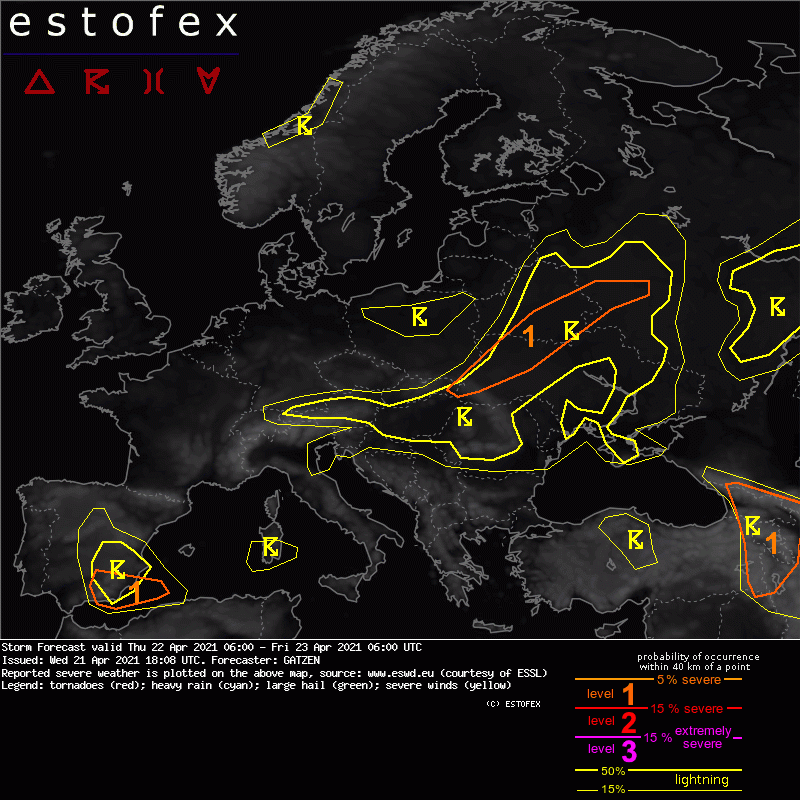 A level 1 was issued across north-western Ukraine, south-eastern Belarus into western Russia for severe wind gusts and tornadoes.

A level 1 was issued across southern Spain mainly for large hail.

A level 1 was issued from eastern Turkey towards the Caucasus region mainly for large hail.

An intense trough amplifies across Central Europe. A cold front will extend from the northern Alps towards western Belarus with some warm air advection taking place east of it, where a moist and slightly unstable air mass is present. Southern Europe is affected by a zonal jet stream with embedded mid-level vort-maxima and relatively poor lapse rates that can improve locally due to diabatic heating.

Ahead of the approaching cold front, a moist and slightly unstable air mass will further destabilize in response to diurnal heating. With south-westerly winds, weak warm air advection is expected ahead of the cold front. Due to weak CIN, frontal lift is expected to be sufficient for initiation during noon.

Deep layer vertical wind shear is weak ahead of the cold front with less than 15 m/s, however, low-level hodographs are curved in the warm air advection regime with about 100 mÂ²/sÂ² SRH in the lowest 3 km and about 10 m/s 0-3 km bulk shear. Isolated storms forming in this environment can develop brief rotation for some time, and stronger storms are not ruled out. Due to low LCL heights and 10 m/s 0-1 km vertical wind shear, brief tornadoes are forecast.

Storm motion vectors along the frontal boundary will support rapid clustering of storms, and due to the moderate 0-3 km shear values, linear clustering is forecast. Bowing segments are not ruled out and severe wind gusts are forecast locally.

Clusters of storms are forecast to spread north-east ahead of the cold front well into the evening, when low-level stabilization will cause storm decay.

Southern Spain and eastern Turkey towards the Caucasus region

Ahead of short-wave troughs that travel eastwards, unstable air masses overlap with strong deep-layer vertical wind shear. During the noon and afternoon, thunderstorms expected to develop over the mountains will become well-organized with splitting storms the dominant convective mode due to long. straight hodographs. Large hail is the primary threat with these storms. Additionally, severe wind gusts are not ruled out, in particular across the east Turkey region where steep low-level lapse rates support some downbursts.