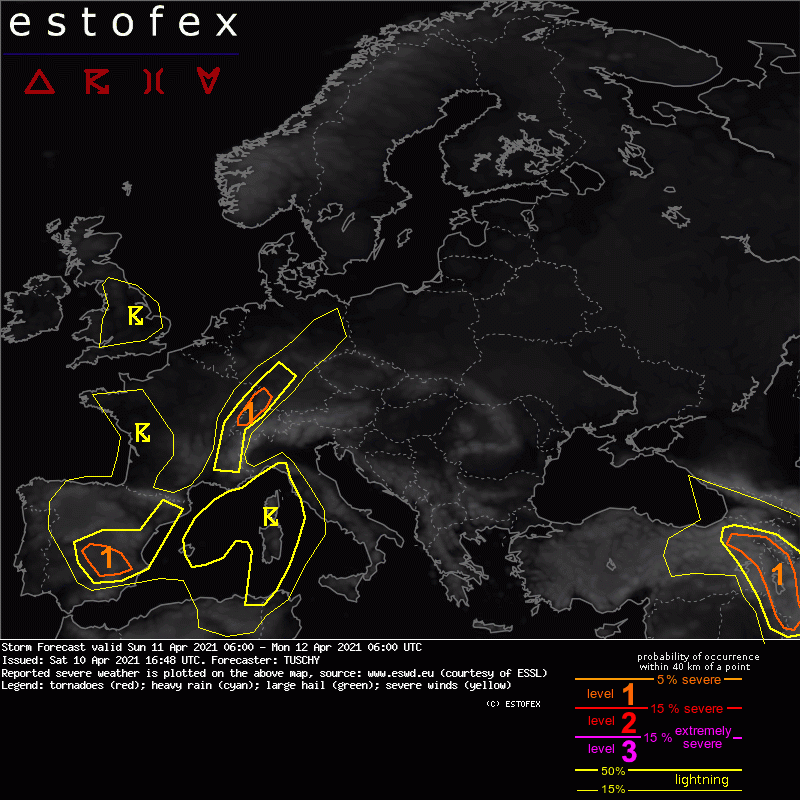 A level 1 was issued for far E-France into SW Germany mainly for isolated large hail and severe wind gusts.

A level 1 was issued for E-Turkey to N Iraq mainly for severe wind gusts and large hail.

Ongoing NAO-/AO neutral pattern causes positive geopotential height anomalies over Greenland/Labrador Sea and far SW Russia/E Europe. Amplified streamline pattern over Europe offers a slow moving upper trough over the North Sea/France and a closed off upper vortex over Turkey. With ridging over E-Europe shutting off advection of continental air from the north, some moisture recovery occurs ahead of the French trough and affects SW and CNTRL Europe.

At lower levels, falling surface pressure indicates a structuring broad LL depression which evolves over Germany/E-France with attached cold and warm fronts affecting most of W/CNTRL Europe. During the end of the forecast period a second depression is in progress just off the coast of SE France which moves towards far NW Italy until 06Z.

Scattered thunderstorms occur over a broad area ahead of the approaching upper trough. Some mid-level cooling and influx of somewhat better moisture from the subtropical Atlantic assist in widespread 200-400 J/kg MLCAPE with mainly weak DLS (10-20 kn). Little CIN and enough synoptic lift should allow for early CI over Spain with clustering and pulsating thunderstorms. Small hail and gusty winds with locally heavy downpours will be the main hazard.
A small level 1 was added, where lingering CAPE exists into the afternoon as DLS increases to 20 m/s in response to strengthening mid-level flow. A few strong/severe wind gusts and isolated large hail could occur.

During the night, scattered to widespread thunderstorms occur over the W-Mediterranean but nothing severe is forecast.

A few pre-frontal thunderstorms are forecast beyond noon. Displaced from an Alpine EML plume and with some cloudiness lingering into the noon/early afternoon time frame, CAPE magnitude may be an issue. However, a sharp shear gradient exists along the CAPE plume and hodographs show good veering in the lowest 4 km, where most of the CAPE is forecast. Would not rule out a few multicells/a transient isolated supercell in case of development in one of the sweet spots the numerical guidance offers (e.g. ICON with 200 m^s/s^2 SRH). However models show still variable regions with the best ingredient overlap and small spatio-temporal overlap should keep this threat isolated. In addition EZ/ICON still place the LL moisture plume with some zonal variation. Hence broad lightning areas were issued. We went ahead and issued a small level 1, where ICON constantly showed a few organized thunderstorms. Degree of insolation dictates this marginal level 1 risk. Of note, EZ has a few better organized storms more to the NE, but confidence in this scenario remains too low for now to upgrade that far to the NE (CNTRL Germany). Gusty winds with mixed BL air mass and local hail will be the main issues. In case of an organized storm, both threats could become severe.